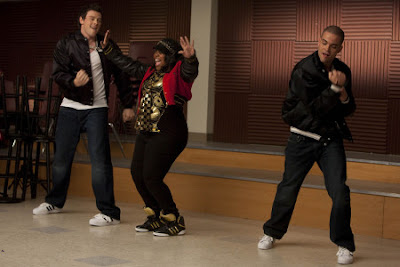 I’ve got to be honest, I did not love this week’s episode of Glee. And that’s fine – it’s impossible to have every episode be your favorite. I thought the premise of the episode would work – New Directions being intimidated by Vocal Adrenaline and feeling hopeless about winning Regionals. And there were aspects of the episode I enjoyed. Everything with Quinn and Mercedes was gold – I loved the slight friendship that developed between them back when Quinn helped Mercedes realize that she didn’t need to follow the Cheerios’ crazy diet to be beautiful. And I’m a fan of anything that helped lead to Mercedes’ killer performance of “Beautiful”. I also liked the idea of Puck and Finn having to work at Sheets ‘n’ Things with Terri. It was a creative way to keep Terri in the picture post-divorce.
But there were things I didn’t like as well. What happened to Jesse St. James? Did I miss something? I tuned in to the episode maybe 30 seconds late and all of a sudden Jesse was performing with Vocal Adrenaline and Rachel was heartbroken? I also didn’t love the Will vs. Sue head games. I found it hard to believe that Sue would fall for that, and what kept Will likable was that he never really stooped to her level. Also, where was Emma Pillsbury? I’ve really been missing her and her adorable outfits these past few episodes. If she’s not in the finale, I’m going to have to spend the summer re-watching the first half of season one and scanning the Anthropologie website for cute cardigans.All that said, I am looking forward to New Directions taking on Vocal Adrenaline at Regionals next week, and hoping for some truly epic performances. And if the job of this week’s episode was to psych me up for that, then mission accomplished.
Are you hanging on the edge of your seat?

The episode opened with Vocal Adrenaline performing what was supposed to be a killer performance of “Another One Bites The Dust” in the McKinley High auditorium. Apparently Sue Sylvester had given them all keys and helped them to a sound check over the weekend. That Sue, what a sweetheart! The New Directions kids were super intimidated, but that would have made more sense had I been more impressed by the Vocal Adrenaline performance. It was maybe their least cool performance yet. If New Directions wasn’t already intimidated by them, I don’t see how “Another One Bites The Dust” could have set them over the edge. It didn’t help that Vocal Adrenaline had TP’d the McKinley High choir room. 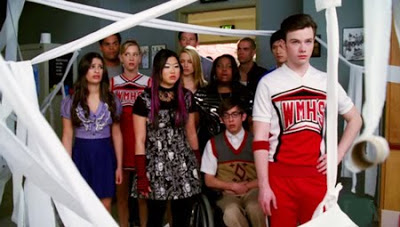 The idea that Vocal Adrenaline had sent their competition into a “funk” gave Will an idea – what’s the one thing his kids can do that Vocal Adrenaline can’t? Funk! Whoever told Will Schuester that the New Directions gang could pull off funk must have been the same heartless fiend who told him he was a really good rapper. Will told everyone about how he’d just officially gotten divorced and that he regretted staying in the bad marriage so long. Santana rightfully asked “Besides creeping us out, why are you telling us this?” Because the New Directions kids wouldn’t regret going to Regionals and losing – they’d regret not trying. Time to funk things up! Mercedes automatically assumed that she’d handle the funk number, but Quinn thought that assuming a white girl couldn’t have soul was racist. Quinn wanted to channel her anger into her own funk number.

Will was also facing a glee club crisis of his own – Sue Sylvester was already scouting out the choir room to be her “trophy annex”. That’s right, Sue had so many trophies that she needed an annex. Because for Sue, “Trophies are like herpes. You can try to get ride of them, but they just keep coming. You know why? Sue Sylvester has hourly flare-ups of burning, itchy, contagious talent.” Gross, but hilarious. I loved that Will smashed Sue trophy, but then he took his revenge a step further. He started by seduced Sue with a sexy number of “Tell Me Somethin’ Good”. Watching Will rub the curly hair that Sue hates so much against her face was too weird. I knew immediately that I did not like the direction Will’s payback was going.

Vocal Adrenaline had also TP’d the New Directions choir room, so Puck and Finn decided to execute some revenge. I loved that the animosity between the two guys was put aside in the name of vengeful debauchery. They slashed the tired of all the Vocal Adrenaline kids’ Range Rovers. (Apparently they have a very active booster club so Shelby bought all the kids Range Rovers. How do I join this choir?) To pay for the damage, Puck and Finn had to get jobs at Sheets ‘n’ Things – enter Terri! She and Will had just signed their divorce papers, and she took to Finn because he reminded her of the 16-year-old version of Will. I also loved seeing Terri’s kinda-creepy employee Howard and the super-creepy former glee club coach Sandy back. 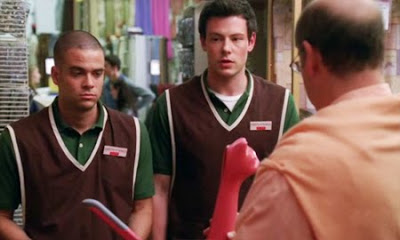 I loved Puck’s imaginary performance of “Loser” that came to include Finn, and eventually the whole Sheets ‘n’ Things staff. As someone who spent a large amount of high school and college working in retail, I thought it was the perfect song to describe the soul-killing feeling that gives you.

Will continued his seduction of Sue Sylvester by bringing flowers and vitamin supplements to her office. She was resistant, even though she’d been writing in her journal about how she’d developed feelings for Will – after all, true love always springs from true hate. They made a date for Wednesday night, which Will sickeningly pointed out was “hump day”. With an eyebrow raise. I almost threw up.Of course, Will did not show up for the date. Sue did – wearing pearls with her track suit! As ridiculous as it is to feel bad for Sue Sylvester – she’s so mean! – I was kind of mad at Will for hurting her feelings. I guess I thought Will was a better person than that. I hate being disappointed in fictional characters! It turned out Will was disappointed in himself as well. Sue took to her bed, heartbroken, and the Cheerios girls fell apart without her (loved Brittany with her cheerleading uniform on backwards) and the championship. Some of them had been relying on the win for scholarships.

It wouldn’t be nothing, nothing without a woman or a girl

Meanwhile, the glee kids had prepared a couple “funky” numbers to perform – though I’m not sure either performance actually qualified as funk. Quinn performed “It’s a Man’s Man’s Man’s World” with her unwed mothers group friends as back-up dancers. I enjoyed the performance a lot, despite the fact that Dianna Agron doesn’t have the pipes to pull it off in the traditional way. Luckily, she’s a really good actress and what she lacked in vocal power she made up for with emotion. Also, I’m pretty sure she’s the prettiest person on TV. 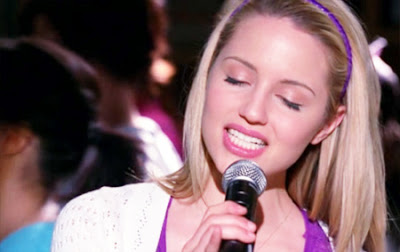 The other performance was Marky Mark and the Funky Bunch’s “Good Vibrations”, sung with…energy by Puck, Finn and Mercedes. The song choice was courtesy of Terri, who had decided to help Finn achieve his glee club dreams by “typing funk into the iTunes”. Apparently Terri had realized that she has “this compulsive need to crush other people’s dreams” and wanted to redeem herself by supporting Finn. The performance left me kind of cold. Mercedes was fantastic, and Puck was just OK but I cannot buy Finn rapping. I liked the dancing, though.

Mercedes ended up being moved by Quinn’s performance, and went to talk to her in the library. At the time, I had thought that comparing how Quinn felt during her pregnancy had more to do with Mercedes’ weight than her race. But according to the Twitterverse, I was wrong. It was definitely a stretch to compare Quinn being shunned because of her teenage pregnancy to the struggles of a black woman in America because each situation comes with its own unique difficulties. For example, people rarely get kicked out of their own homes for being black. The two situations are very different, but I can believe that Quinn and Mercedes have developed a bond and I loved that Quinn will move into the spare room at Mercedes’ house.

After seeing what happened to all the Cheerios girls without Sue, Will went to apologize to her. Kurt had explained to him that even though Sue didn’t need a trophy some of the girls really did, but I thought that conversation would have been better between Will and Emma. It would have given us a chance to see at least one Emma Pillsbury outfit during the episode, and I like seeing Emma act as Will’s conscience when he screws up. Sue’s house was exactly how you’d imagine it. It was full of trophies and she had a maid named Imelda who was worried since Sue hadn’t been drinking her protein shakes. Will reminded her how much the Cheerios needed her and she returned to win the championship – they were a shoe-in with Kurt’s 14-minute long Celine Dion performance.

Tear the roof off that sucker!

Just in case the New Directions kids weren’t intimidated and depressed enough already, Vocal Adrenaline decided to take things one step further. Jesse called Rachel and told her to meet him in the parking lot. She ran outside only to be egged by the entire Vocal Adrenaline gang. And I thought getting a slushy in the face was bad! Just to put the painful teenage experience REALLY over the top, Jesse walked up to Rachel and said “I love you” before crushing an egg on her forehead. What a way to show love! Knowing that Shelby is Rachel’s mother, the brutal treatment of Rachel specifically seemed kind of difficult to believe. 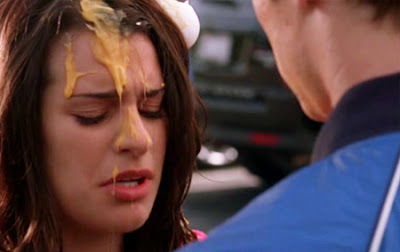 By the end of the episode, Sue was back to her ice cold, manipulative self. She arrived at Will’s apartment with her 8-foot-tall statue and gave him a choice – store the trophy in a bullet-proof case in the choir room, or kiss her. Will chose the kiss only to be shut down – “Even your breath reeks of mediocrity,” Sue told him. Ouch! She’s back!

The final number of the night was Parliament’s “Give up the Funk” (you knew that had to do parliament) and while it wasn’t vocally amazing, it was a lot of fun to watch. In particular, I was digging Brittany’s hair and outfit. I didn’t think it was possible for Brittany to be any cooler, but earlier this week I found out that the actress used to dance with Beyonce, so now she’s my hero. New Directions performed the number for Vocal Adrenaline to give them a dose of intimidation, and apparently it worked. Like “Another One Bites The Dust”, I didn’t think it was all that intimidating, but the episode’s focus on the rivalry between the two groups definitely has me looking forward to the finale next week. As Puck said, “See you punks at Regionals!” 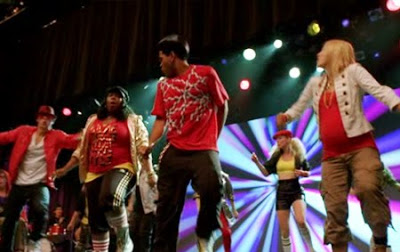 Other Glee-tastic quotes and moments:

What did you think of the penultimate episode? Are you looking forward to next week’s finale?