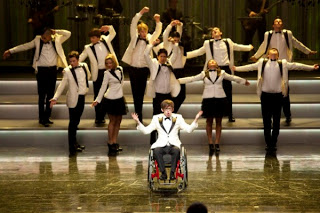 Oh, Glee. You’ve really been having a rough go of it, haven’t you? Last season was spotty and inconsistent – great episodes (the Christmas one!) and terrible episodes…but this season’s ratio has been more bad than good, and it’s getting upsetting.

“Hold Onto Sixteen”? Well, your first mistake was putting Quinn in the spotlight. What you’ve done to that character should be against television law. It’s unfixable, so just graduate her already and move on, OK? And that medley New Directions did at Sectionals? There is almost nothing less sexy, unique or interesting than Tina – a character known only by the fact that her insane collars are slowly eating the rest of her body – leading the group on a song by the Jackson 5.

OK, let’s start at the beginning – the return of Trouty Mouth! Poor, poor Sam Evans – and I’m not just saying that because he was homeless last season and thus quite literally poor. No, I’m saying it because of how Ryan Murphy totally screwed with him. He brought him in, he was a good character, he finally got a decent storyline with the homeless stuff and a Mercedes romance and then – poof! Off the show. Suddenly his family had moved to Kentucky and Mercedes was dating Tinker from Friday Night Lights, not that we ever see them together anymore.

But without Rachel able to perform at Sectionals, new Directions realized they needed some extra oomph, some star power. (Again, if star power is what you’re looking for then you REALLY should have rethought the Tina solo.) So Finn and Rachel roadtripped four hours to Kentucky to see Sam…where he was working as a stripper (or something, we only saw him with his clothes on) named “White Chocolate”.

Good god. You’ve got to be kidding me.

OK, the scene was actually kind of funny – mostly thanks to Finn, who has a face basically created to express simultaneous surprise and discomfort. It was actually what followed that bugged me – yes, Sam admitted, he was a little ashamed of his job. But his family still needed financial help and he was raking in a lot more dough shakin’ his buns on stage than he was flipping blizzards upsidedown at Dairy Queen. Fair enough. But no! Not fair! Under the guise of preserving his dignity, Rachel and Finn convinced Sam to come back to Ohio to help them win Sectionals – they needed him! So the basic sentiment was “Leave your family in the dust, stop helping to pay those bills, and come save our show choir!” I’m so glad Rachel has gained a little perspective on what’s truly important in life. 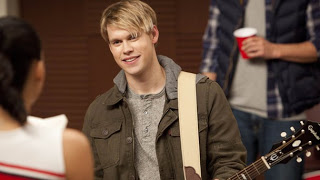 Of course, Sam’s parents were totally on board with letting him move back to Ohio to sing and dance. Because it’s Glee. Anyway, welcome back Lisa Rinna! In the absolute best moment of the entire episode, Santana had kept an entire notebook full of Trouty Mouth insults just in case he should ever return. Can Santana get her own spin-off show? Please? (Best line of the night? “It would be rude if I followed you around and every time you took a step I played a note on a tuba.”)

Sam celebrated his return to McKinley by singing “Red Solo Cup”, which miraculously even the Irish kid knew the lyrics too. At least they got Kurt’s reaction right – his facial expressions and total confusion during that performance made it worth not fast-forwarding through. What were we supposed to assume Mr. Schu had brought them to drink? Sparkling apple juice?

Other stuff went down before Sectionals – which were being held in the McKinley auditorium for the first time since 1963 – as well. Kurt and Blaine ran into that smarmy jackass Sebastian at the Lima Bean, and he was once again a total douche. Kurt put him in his place this time (“I don’t like your smirky little meerkat face”) but obviously (well, not obviously since this is Glee) this isn’t the last we’ll see of Smirky Sebastian. But since The Warblers were part of a different Sectionals group and had already won, the scene was a little disconnected from the rest of the show. The two show choirs will face off at Regionals, but I think they probably should have saved this scene for another episode.

That said, you can’t beat “You smell like Craigslist.” 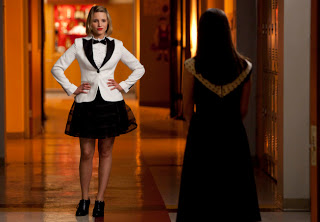 The biggest detriment to this whole episode, like I said, was that it heavily featured Quinn. When the episode began, Quinn told Rachel that she knew they’d win at Sectionals because she was about to tell Figgins about Shelby and Puck, so Shelby would get fired and the Troubletones would be no more. And sleeping with a student? That sounds like an unfit mother! And Quinn will be waiting in the wings, ready to take Beth back. Great, so we’re back to that again. Rachel urged her not to do it, because now that she’s been suspended she knows what it’s like to do the wrong thing. She said this with the weight of conscience of someone who once killed a man, not someone who rigged a high school election and then did the right thing by confessing.

When Sam returned, Quinn was right up on that because she thought he’d be the perfect dude to raise Beth with. Puck’s ridiculous hair has ruled him out for that role. But as Finn pointed out, “Even homeless people have Facebook,” so Sam knew just how messed up Quinn was. He told her she had “what I like to call” (and everyone else in the world) “Rich White Girl Problems”, which makes me think he probably also has Twitter. 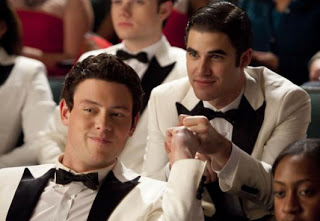 Also, Finn and Blaine finally buried the hatchet. Finn confessed that he’d felt threatened by Blaine’s talent (as he should) and we all got to see Blaine box. They agreed to work together to try as hard as possible to win Sectionals, Finn said “No regrets” and as always when I hear someone say that phrase, I automatically responded “Texas forever.”

Dance for your Life

Meanwhile, Tina and Mike were fighting over whether he should apply for dance schools or go to Stanford and become a doctor. Tina was dead set against Stanford, obviously, but Mike didn’t want to destroy his family so he’d already applied to Stanford. I, for one, thought “Is this really your business, Tina? It sounds like a family matter.” Because I’m respectful like that.

Tina, obviously, felt that it was most definitely her business, so she paid a visit to Mike’s dad. Oh great, because the super strict Asian father is going to care when his son’s less talented girlfriend who also wants to pursue a career in the arts says he should support his son. Especially when that girl constantly looks like Wednesday Adams.

Mike’s dad was having none of it and wouldn’t even look at the West Side Story recording Tina had brought, but later he showed up at Sectionals. More on that later.

OK, the actual performances. The Unitards were first, which is the show choir headed by Rachel’s doppelganger. They did “Buenos Aires” and were very good. I liked seeing Kurt sing along a little from the audience. Next! 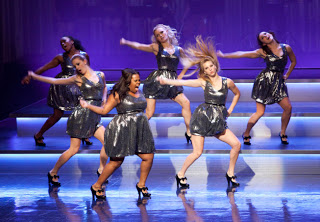 Next were the Troubletones, who wowed with their mash-up of “I Will Survive” and “Survivor”. Yes! I loved it. I loved the song, the dancing, and the sparkly dresses. One question, though – who are all these members? Where did all these girls come from? New Directions also had fun mash-ups and pretty dresses, once upon a time! Where was their interest in show choirs then?

Ugh, do I have to talk about New Directions? Most. Boring. Competition. Performance. EVER. Like I said, Tina opening with a Jackson 5 song is decidedly not sexy. There’s no way Sam approved that. Then they moved into Janet Jackson’s “Control” and ended with “Man in the Mirror”. How come all the other glee clubs have to do single songs or mash-ups, but every year New Directions gets to do a big long medley? Hmmmm?

Seriously, y’all, that medley was dull. Remember Anyway You Want It/Lovin’ Touchin’ Squeezin’? That was a fun mash-up. I miss that. New Directions was clearly the worst of the three glee clubs. And did Sam even have a solo? Or just a stupid red solo cup? They begged the guy to come back and then I barely noticed him on stage, other than a few stripper-esque dance moves.

Quinn was about to go rat out Shelby before the Troubletones went on, but Rachel convinced her not to. Yawn! Mike’s dad showed up to the Sectionals performance, and afterwards he told Mike to apply to dance schools and he’s support him any way he could. Sorry Glee, but if there were two things that would cause a change in heart in Mike’s dad, they would NOT be Tina or that dreadfully boring performance. Get with it. Anyway, because Tina is nosy and imposing, she’s already sent in Mike’s dance school applications so it didn’t matter that he’d missed the deadlines.

Enter Quinn! She decided not to spill the beans on Shelby because she suddenly thinks she’s a good mother to Beth. And she wants to go to Yale – drama school! OK, for real? Are ALL of these kids pursuing careers in the arts? None of them are planning on becoming, like, publicists or architects? None of them are just in show choir for fun, and maybe to pad their resume a little for when it’s time to apply for, like, a Bachelor of Science degree? Puh-lease. Anyway, Quinn convinced the Troubletones to rejoin New Directions on the condition that they’d get to sing one song per competition. Because if you’ll remember, the official show choir rules do state that New Directions gets to do three songs per competition while all other show choirs only get to do one.

Quinn told them to show up in the auditorium for a celebratory song — “We Are Young”  by fun. featuring Janelle Monáe, which is a great song…maybe they should have done THAT at Sectionals — and Mercedes, Santana, Brittany and Sugar showed up. That’s right, only FOUR GIRLS. Where did the other ones go? Did they all suddenly lose interest in show choir again? Were they all related to Shelby? WERE THEY IMAGINARY? And what about Sugar, is it OK for her to join the glee club now? Because she was rejected before, and that’s how this whole mess started.

Glee: Hold Onto Season One
https://haligonia.ca/glee-hold-onto-season-one-50281/