Remember that episode, early on in New Girl, when it was discovered that Jess can’t say the word “penis”? This episode was a much better execution of that – fresh out of a six year long relationship, Jess has started dating Paul and worries that she might not be good or exciting enough in bed.

The difference between this episode and the previous one was that instead of depicting Jess as immature, silly and almost oblivious to sex, she’s shown as someone who wants to have sex with her new boyfriend but is nervous and insecure. And that’s much easier for viewers to relate to.

After taking a backseat in last week’s episode, Jess was back front and center in this episode – but the writers have figured out how to give her just the right amount of Jess-ness without going over. Too much, and quirks turn into major annoyances. Not only has the show found its stride overall, but I think they’ve figured out the right tones to hit with their main character as well. I thought “Bad in Bed” worked really well.

So Jess and Paul’s first time didn’t go so well, and Jess knew it. “It’s like starting a new job with a really weird interview,” she told him. But Jess was determined to rock Paul’s world the next night, so she asked her roommates for help. That, of course, led the dudes down a dangerous slope of discussing which one of them was best in bed – and both Winston and Schmidt were sure it wasn’t Nick. 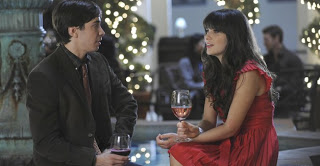 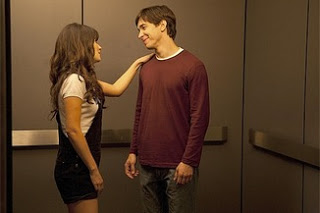 Jess was bummed, but Winston gave her a pep talk (Be yourself! Works as advice in almost every situation.) and she made things right with Paul – he came over to tell her he was so crazy about her that he was willing to try just about anything, and she confessed that she’s only done that stuff to try and impress him. And then they did it in the elevator! Perfect. She didn’t need that stupid lingerie – Paul was obviously into her when she was wearing overalls, so that means he really likes her.

The focus was on Jess this week, but the subplots were also funny. Nick resisted getting a haircut because it’s too intimate (with the touching and the forced conversations) and ended up getting a ridiculous style at Winston’s barbershop. But the real highlight was getting a glimpse into Schmidt’s female-filled workplace. In order to get ahead he invited himself to a baby shower, and ended up rocking it – who knew pushing your heavily pregnant boss into the pool would win brownie points?

OK, so I liked the episode – what did you guys think? And check out a few of my favorite quotes: