Glee returned last night after a three week hiatus (thanks a lot, baseball) with an episode that, well, wasn’t exactly a home run. (Pun all kinds of intended.) The episode marked the arrival of Damian McGuinty, who was one of two winners of The Glee Project over the summer, and I don’t think he blended as well into the show as fans of The Glee Project might have hoped. Thanks to that, a Quinn storyline even uglier than her clothes in the first few episodes of this season, and a rather weak musical selection, this was definitely not the Glee I wanted to see come back after a baseball-induced break. Let’s break it down, shall we?

At the end of the rainbow… 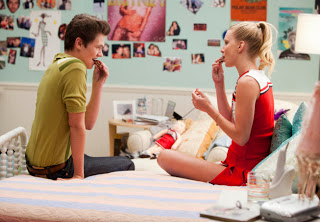 McGuinty was playing Irish exchange student Rory Flanagan, who was staying at the home of one Brittany S. Pierce. Brittany thought he was a leprechaun (because, you know, she’s Brittany) and told him that if he granted her three wishes she’d let him have her pot of gold. I’m not sure what she meant by that, but Rory thought it meant getting to lose his virginity to Brittany. Brittany’s first wish was for a box of Lucky Charms made up of only the marshmallows. Her second wish was that her cat, Lord Tubbington, would poop chocolate bars. Yeah. She actually ate a chocolate bar that Rory had planted in the litter box.

Then Santana intervened, manipulating Brittany’s innocence in order to get what she wanted – for her and Brittany to defect to Shelby’s glee club. Santana, like Mercedes, has long been tired of living in Rachel Berry’s shadow and was easily wooed by Mercedes’ pitch to join Shelby’s new all-girls club. But she didn’t want to go without Brittany, and Brittany didn’t want to abandon her friends. But since Santana had wished upon a leprechaun, Brittany thought she had no choice. Riiiiight. This was a bit much, even for Brittany. Especially because after a particularly harsh conversation with Finn, Brittany realized there were no such things as leprechauns. So why bother switching, then?

I’m really not a fan of this whole second glee club thing. It seems like a cheap way to reintroduce Shelby to the show and cause some drama with New Directions. Yeah, it’s fun to see Rachel panic as her senior year turns out nothing like she’d planned. But do Shelby, Mercedes and the rest of the “Trouble Tones” not realize that they don’t even have close to the required amount of people to compete as a show choir? New Directions doesn’t either, but they only need a few more to meet quota. Mercedes will need to recruit more than just Santana and Brittany if she wants to even compete in Sectionals, let alone win it.

That said, I dug the girls’ performance of “Candy Man”. It was a great song for them. And I’ll even pretend like it doesn’t big me that they had four backup dancers during the number, but only one was identified as that obnoxious Sugar girl. I mean, what, did they clone her? Who else was dancing? Sigh.

Another problem I had with the new character of Rory was that he was dressed in green the entire episode, and sang “It Isn’t Easy Being Green”. A touch heavy handed, don’t you think? Hopefully throughout the course of his story arc this character becomes a little more fleshed out, because right now he seems rather cartoonish.

Speaking of Santana and Brittany, I guess they’re dating now. This is a storyline I’m actually down with, yet it only got about four minutes of screen time this week because the writers would rather shove a bunch of crap about leprechauns down our throats. Again, sigh. Santana is finally getting what she wants with Brittany, yet she’s still so ashamed of her sexuality that she makes them hold hands underneath a napkin. From what I’ve read, Santana will be getting some better material in a few episodes, so at least I can hold out hope that this is actually a storyline that will develop into something good. Kurt had a relatively easy time coming out of the closet (not with the bullying, but with his lovable, supportive father) because there was really never much of a mystery about his sexuality, and it would be interesting to see that situation evolve in a different way for Santana.

Things are not going well for New Directions. They’ve lost members and rivalries have overshadowed any feelings of camaraderie. Finn is jealous of Blaine, everyone’s pointing the blame at each other for Mercedes’ exit, Rachel’s worried about the school musical being cancelled. This wasn’t a great episode for Finn. I feel he’s played the arc of acting like a jerk, realizing he was a jerk, and thus making things right far too many times. He overlooked the fact that Damian was being bullied and called Brittany an idiot only to later stand up for Damian, introduce him to the glee club, and apologize to not only Brittany, but Santana and Mercedes as well. It’s too season one, and it’s time for Finn Hudson to grow up.

The more interesting story arc for Finn this season is the question of what he’ll do when he graduated. Both his girlfriend and his stepbrother have big plans to go to college in New York, but it’s unlikely that Finn could get a football scholarship anywhere or attend anything more than community college. His parents could be splitting their time between Washington D.C. (more on that later) and Lima. Where will that leave him? The look on his face when Burt suggested that Finn help run the car repair shop suggested that Finn wouldn’t mind having that as his future, and it’s a perfectly respectable plan. I hope we get to see more of this throughout the season, since I’d much rather watch Finn try and figure out what his life will be post-high school than see him struggle between being a douche or a nice guy.

I find the whole “Sue’s running for Congress” storyline rather ludicrous, but since I’ll take any plot that involves extra doses of Burt Hummel, I can get on board with the new twist that he’s running against her. Even if it’s kind of rushed and he’s only running as a write-in candidate. I kind of wish Sue had just been running for the school board or city council or something, since that would be far more believable, but this is Glee after all. Major suspension of disbelief comes with the territory.

The idea first came to Burt when he helped Kurt raise the $2004.00 needed to keep the school musical afloat after Sue pressured Figgins into cutting the funding. Burt’s strong, self-assured style is the perfect match for someone as over-the-top cruel as Sue Sylvester. 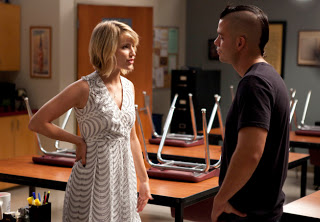 And now, let’s discuss the weakest link in a less than stellar episode: Quinn. I’ve skimmed a few other reviews of this episode of Glee and checked out my Twitter timeline last night, and it seems basically no one is on board with this Quinn Tries To Get Her Baby Back storyline. And that’s because it’s abysmal.

Quinn used to be one of my favorite characters. A classic mean girl who was actually very smart and even kind of nice, who was just coping with the pressure of trying to be perfect as she tried to find a way to get out of her small town life. Everything came crumbling down around her when she got pregnant, and I found that interesting. But since giving up the baby, her storylines have been crap. Since when does Quinn think she’ll be stuck in Lima, Ohio forever? Does she not still have good grades and an impressive list of extra-curricular activities? Didn’t her family have money? Why can’t she go to college?

We’re supposed to think that Quinn’s abhorrent behavior stems from her regret in giving up her baby, which was apparently the one perfect thing she would never screw up. Well I’m sorry, Glee, but that’s just too much to ask. In the past, Quinn has shown herself to be completely capable of logical thought. She would know that it’s indeed very easy to screw up raising a kid, even one as cute as Beth. The maturity and logic she showed in making the decision to put Beth up for adoption because it was the best thing for both her and the baby has completely disappeared, and it seems wildly out of character. Because this is all so ridiculous, it means viewers have absolutely no sympathy for Quinn as she goes around doing bratty, stupid things like planting dangerous items in Shelby’s apartment so she can call child services and get the baby back. Come on! You can’t tell me that Quinn is so stupid that she’d think if Shelby lost the baby, child services would just hand Beth back to the teenage mother who gave her up? No! She’s go into foster care, you moron! Someone else would adopt her!

And then we have that kiss. Yeah, Puck and Shelby kissed. This can’t go anywhere good, I’ll tell you that. I would have been so much happier to explore a completely platonic relationship between Shelby and Puck as Puck stepped up to the plate as a birth father who wanted to be a part of Beth’s life for truly good reasons, and not just because he’s freaked out by his lack of a life plan. But that would have been too simple, I guess.

This review has gotten a little too ranting, so I’ll end things here. Let me know what you thought of the episode in the comments section, and I’ll keep my fingers crossed that things get back on the right track next week. Until then, check out a couple of my favorite quotes and moments from “Pot Of Gold”: