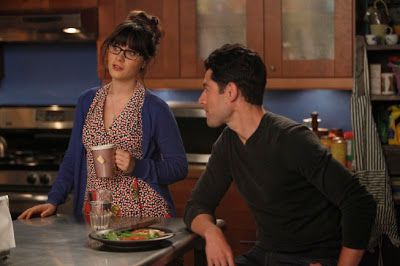 After three weeks of baseball, X-Factor, and huddling under the covers of my bed whimpering because WHAT AM I SUPPOSED TO DO ON A TUESDAY NIGHT WITH NO TV TO WATCH??? all the Tuesday night Fox shows I watch have finally returned. That includes the Zooey Deschanel comedy New Girl.

New Girl was one of the stronger new comedies this fall (for me, it fell well above 2 Broke Girls but slightly below Up All Night) and while I still have faith that the show can find its rhythm, I didn’t love last night’s episode.

I think the problem with New Girl, and with the episode “Naked” in particular, is that Jess is being written as a tad too over the top. I could believe that Jess, a grown woman, would giggle upon seeing her male roommate naked, would feel incredibly embarrassed about the situation, and might even have a little trouble saying the word “penis”. I can believe all that, because I know people like that. But the silly words she used to describe the male anatomy? No. It was too dumb, and it makes Jess not only an unrelatable character, but an annoying one.

There was stuff about Jess that I did find not only believable, but endearing. The feelings stick? Loved it. The travel size feelings stick? Really loved it. The idea that Jess was so desperate to discuss was Nick was dying to just sweep under the rug was a good look at how Jess and the guys interact as roommates. Especially at the end when Winston and Schmidt totally got on board with using the feelings stick.

Had Jess’s innocent naivete been toned down just a little, I would have been able to appreciate the rest of the episode more. The bones of “Naked” were good – Nick struggled to reenter the dating world following his breakup with Caroline, and that was hindered even more following Jess’s reaction to see his, er, manhood. No guy wants a gal to look down there and laugh. Meanwhile, Winston was struggling with reentering the real world after playing basketball in Latvia for so many years. Not only was he painfully behind on all the pop culture trivia and Internet memes required to make small talk, but he had no idea what kind of job he wanted. It was also funny to watch Schmidt’s many attempts to catch a look at Nick’s stuff, since he was now the only roommate who hadn’t seen it.

This episode wasn’t the series’ strongest showing so far, but it’s important to remember that while it is November, this is only the show’s fourth episode. I still think there’s enough good stuff here for New Girl to become a show I really enjoy. There were a lot of funny quips and moments in “Naked”, so here are a few: