I’ve talked before about how Glee requires a tremendous amount of suspension of disbelief, and last night’s episode was a great example of that. Overall, I had fewer problems with “I Kissed A Girl” than I have with some other recent episodes. But holy crap, you really need to accept the fact that the show takes place in a universe where very little makes sense if you want to keep watching.

The episode centered around Santana having to basically leap out of the closet before her family could see the attack ads against Sue Sylvester that actually victimized her. In the normal universe, outing a teenage girl for the sake of a political campaign would never, ever fly. It’s stupid and ridiculous. But this is the Glee universe, and we’d already been given a dose of just how stupid this political campaign was. So you can either roll your eyes and shrug it off, or stop watching the show. 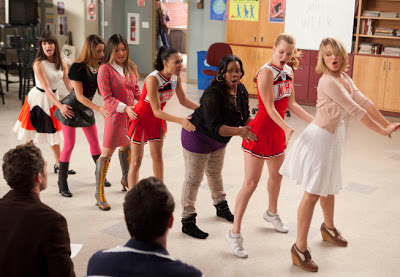 At first, Santana approached the situation with her usual attitude of vitriolic sarcasm and anger. But this is Glee and all it took to reverse years of using meanness as a shield was a few songs performed in her honor! Finn decided that to help Santana, New Directions and the Treble Tones would join forces to perform songs written by ladies for ladies. Oh, and he also told Figgins that the slap Santana served him following that rockin’ Adele mash-up was fake, so no need for a two week suspension. What a nice guy! This week, anyway.

Finn The Hero got a tad heavy-handed when Finn confessed that he was so desperate to help Santana because of all the gay teen suicides he was hearing about. It was a valid point, I just wish it had been handled with a little more subtlety.

The songs performed on Santana’s behalf were hit and miss. First Kurt and Blaine paired up to sing Pink’s “F—in’ Perfect”. Oh boy. Kurt’s voice is just not suited for this song, and I couldn’t move past the fact that they introduced it by saying they like to sing it to each other in the car. Really? Y’all just drive around, looking at each other with pained facial expressions and singing about how perfect you are? Sorry, but that’s weird. Also weird was Kurt’s half-turtleneck-sweater thing, but I’ve ceased to be surprised by anything Kurt wears. This was a great song to sing to Santana, but frankly I think it should have been Brittany singing it. I mean, this whole thing was about Santana being true to who she is and her own girlfriend couldn’t even score a solo? What’s that all about?

The next performance was by Puck, singing the Melissa Etheridg tune “I’m The Only One”. It was more for Shelby than Santana and I’ll talk about that later, but for now I’ll just say that I’ve always had a thing for Puck and won’t complain about getting to hear him rock out.

By far, the low point of the episode was Finn’s ballad version of Cyndi Lauper’s “Girls Just Wanna Have Fun”. I’m sorry, but I hated this so much you guys. I probably hated it on the same level that most of you hated Coach Bieste singing “Jolene”. Now, I have a soft spot for both this song and the character, so I’m going easy on it. I know Bieste isn’t the greatest singer in the world, but I don’t think she needs to be. It wasn’t an actual performance, it was a fantasy sequence, and I think the song played up her emotional pain perfectly.

Apparently Finn’s disaster of a song was just what Santana needed, so she came out to her parents (seamlessly, apparently) and performed a fun, flirty version of “I Kissed A Girl” with all her female glee club pals. I was glad the show didn’t ballad-ize this song, which I feared they would. I question the fact that it ended up being so easy for Santana to come out to her parents, but it was a fun performance.

Obviously, Santana’s parents were cool with the news because the show wanted to focus instead on her beloved grandmother. This was the highlight of the episode for me, because I think it touched on a very common and real issue. Many people have traditional, old-school grandparents who they love dearly. And sometimes those old-school grandparents don’t approve of modern life choices, whether they be interracial dating, living together before marriage, coming out of the closet, etc. What do you do when someone you love very much doesn’t approve of you? Old people have old school values. I was glad Santana’s grandmother didn’t accept the news with open arms. I think the way she treated Santana is a reaction many people might get, and Naya Rivera was very, very good in this scene. The grandmother she loved, the grandmother who kept trying to feed her and clearly loved her, suddenly wanted nothing to do with her. Santana was crushed. This was a much needed dose of heartbreaking reality in the Glee world.

That led to the last song of the episode, “Constant Craving”. Santana killed it, and the added presence of Shelby was great. I may hate her storyline, but I still love Idina Menzel’s voice. 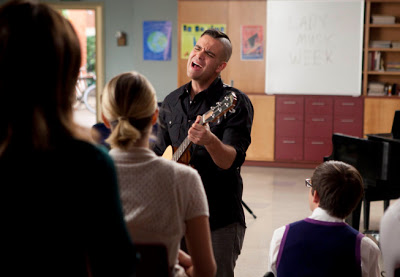 OK, let’s talk about this hot for teacher storyline. Puck is still pursuing Shelby, as evidenced by the way he serenaded her with “You’re The Only One”. It seemed like most of the glee club picked up on the fact that he was looking at Shelby an awful lot, although Will remained blissfully unaware. (I have to say, I kind of got a kick out of that.) Shelby brushed him off, but then immediately enabled the whole situation by calling Puck to come to the hospital when Beth cut her lip and needed stitches. Puck was the calm one, he comforted Shelby, and they ended up in bed. Of course.

And then, once again, Shelby told him it was a mistake that couldn’t happen again. But how are we as viewers supposed to feel about this storyline? Am I supposed to be rooting for these two crazy kids to make it? Am I supposed to feel sympathy for Puck? I just don’t like it, and furthermore it seems to draw attention to the fact that Mark Salling is way too old to be playing a high school student.

After being rejected post-sex by Shelby, Puck went over to Quinn’s house where she tried to seduce him, sans-protection. Stupid, right? Even stupider because it was ON PURPOSE. Having abandoned the moronic idea to win Beth back from Shelby, Quinn had decided that her new plan was to get knocked up again. She and Puck would make another baby, and if he wasn’t down then she’d find some other guy. Any other dude, didn’t matter who. Because having a baby with just anybody simply because you want one screams “I make great life decisions and therefore would be a capable mother.”

Thankfully, someone finally told Quinn what a hot mess she’s become. It was a moment, I think, that we’d all been waiting for. Unfortunately, it was too little too late. I was glad someone finally acknowledged that Quinn has totally gone off the rails in her intense desire to be loved, but I still find it too hard to believe that Quinn would be that stupid. Her family has money, she had good grades and has extra-curricular activities. It shouldn’t be that hard for her to go to college and get out of Lima. So why does she think having a baby is the only route to success? Quinn used to be one of my favorite characters, but she has been too inconsistently written for the past season and a half.

Angry about being rejected by Shelby, Puck told Quinn about their encounter. He told her this literally seconds after he told Quinn was a mess she is. You just told your ex-girlfriend she’s a total trainwreck, and now you’re going to trust her with this sensitive information? Do you really think she would keep that a secret? Come on, Puck. This can only end badly. Or, predictably – Glee wasn’t likely to keep Idina Menzel on staff forever, so this unfortunate storyline seems to be leading right to “Shelby gets fired and the Treble Tones are no more, so New Directions will reunite and win Sectionals even though Rachel’s not there.” You know I’m right.

(OK, based on pictures from next week’s episode, I’m not right. So I guess they’re not going to acknowledge the fact that a couple years ago, you had to have a certain number of members in your show choir to qualify at Sectionals. I shouldn’t be surprised.)

Speaking of that, yeah, Rachel has been banned from Sectionals. Actually, this is a storyline I kind of liked. Desperate to win the election even though Brittany was way ahead in the polls, Kurt considered rigging the election a la JFK. He didn’t, but someone else did – Rachel.

I’ve always liked the friendship that has developed between Rachel and Kurt, and I believed the idea that Rachel would be so desperate to attend NYADA with her best friend that she’d do this very stupid thing. Of course, she did it wrong – she stuffed the ballot box, resulting in their being more votes than there were seniors. Obviously, Figgins and the other teachers suspected that Kurt was the culprit, since the fake votes led to his win. So Brittany was declared Senior Class President, and Kurt was to be suspended if the administration could prove his guilt.

Luckily, Rachel stepped up and did the right thing. She confessed, even though it meant the transgression would go on her permanent record, she’d be suspended for a week, and she was banned from performing at Sectionals. Will it also cost her a spot at NYADA? It seems that way. 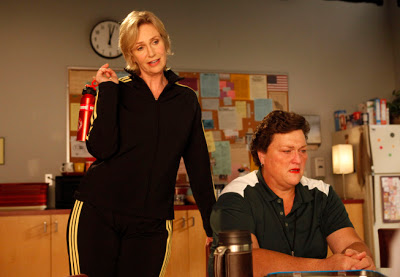 Burt Hummel won the election. This was announced with very little pomp and circumstance, wasn’t it? Instead of focusing on the actual victor, any the congressional election storyline we got was Sue stealing Coach Bieste’s one true love, Cooter Menkens. Why? To show she wasn’t gay. Of course. While the list of Sue Sylvester’s past booty calls did make me giggle a little, and watching poor, oblivious Bieste lose her man so easily tugged at my heartstrings, overall this storyline was just too stupid to care about. Sue lost the election, but Bieste still lost her man – he likes both ladies.

OK, what did you guys think about the episode? Can this season be saved? Can this show be saved? Now, here are a couple quotes I liked:

Glee: She Kissed A Girl
https://haligonia.ca/glee-she-kissed-a-girl-49836/