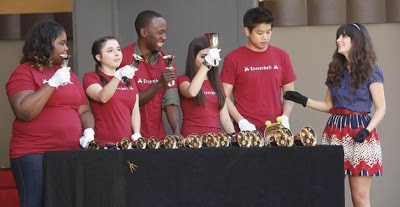 New Girl has developed into a show that I really enjoy., and I think these past couple episodes have showcased that. The series was introduced to us as a vehicle for Zooey Deschanel’s “adorkable” personality, and while it was a successful marketing campaign on many fronts (the show has good ratings) there was also a backlash. People love to hate on Zooey and, yes, at times her character can be overwhelming. But the marketing campaign was just that, and the show is about four people, not one.

“Bells” paired Jess up with Winston and engaged them in a pretty reasonable conflict, while Schmidt and Nick battled on a more heightened level. It makes sense – not only is Jess a generally sweet and kind person, but she’s a newcomer to the living situation and therefore her fights don’t get as vicious as those between people who’ve known each other for years.

Jess was coaching a group of rebellious students in hand bells, something they signed up for as an alternative to detention. When it turned out that Winston was a natural genius at it, she enlisted him to help inspire the kids to work harder. It was a good idea, but Winston took things too seriously – after all, his life has been rather directionless since he stopped playing basketball. The scene of him timing himself in stuffing envelopes at his temp job was hilarious evidence of that. So Winston got overzealous and a little mean (in that scary coach kind of way) and Jess had to fire him.

The resolution was pretty simple – Winston realized he’d gone too far and had focused too much on himself, and Jess forgave him because she knows his life kind of sucks right now. It was a simple storyline but it delivered a lot of laughs. Winston trying to teach the kids to do “Eye of the Tiger”? Hilarious.

Meanwhile, Nick and Schmidt butted heads over their very different approaches to handling problems in the apartment. Like the broken toilet – Nick didn’t want to pay an expensive plumber, so he rigged up a makeshift solution. Nick has the money to actually fix the problem, so he went ahead and paid a plumber. And then it was war – Schmidt reclaimed all the things he’d purchased for the apartment, and Nick re-broke all the things he’d fixed. (Small inconsistency – remember the time the TV broke and everyone was upset, until Jess went and got her TV back from her ex-boyfriend? Weren’t we supposed to believe that no one could afford a new TV?)

The conflict highlighted something that’s been coming up more and more in the past couple episodes – Nick working as a bartender because he dropped out of law school. At the height of his anger, Schmidt reminded Nick that he chose to drop out, he chose to be a bartender, and he wasn’t some rough ‘n’ tumble down on his luck dude, he was a loser – oops. When you’re friends, you fight like friends. Things get more personal.

It was funny to watch things escalate, especially since poor Jess really had no idea what was going on. “What happened to the fridge and sofa? Did we get robbed by giants?” was one of the funniest lines of the episode.

So what did you guys think of the episode? I think at this point, the show has a clear sense of self and the characters have more defined personalities than in the pilot – obviously, because sitcoms take time to develop these things. Personally, I like what I’m seeing. Here are a couple more highlights from the episode: