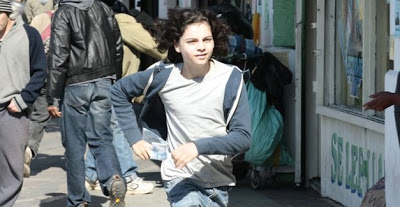 Even when there’s a storyline I might not like so much, Parenthood manages to turn it around and make it something I can get behind. In last night’s episode, that happened twice.

An incident at home made Kristina realize that she needed to get over what happened with Adam and Rachel and focus on what’s important. And Julia comforted Zoe in a time of need even though the adoption is looking less and less likely. There was so much to like about this episode, so let’s talk.

The big storyline this week was Max running away (sort of), and it was nice to see Haddie get her first dose of good screentime since the Alex storyline wrapped up.

Kristina hit the ground running at her new gig on a political campaign, and that included hiring Amber as her assistant. I’d accidentally read about this storyline in advance, and I have high hopes for it. These are two characters who don’t interact a lot, but they have an interesting history together. Kristina hasn’t always been a big Amber fan (remember the time Amber slept with Haddie’s boyfriend?) and she knows about the rough patch Amber recently went through. Amber herself was hesitant to work for Kristina, knowing how she totally blew it at Julia’s law firm. But Kristina has faith in Amber. She saw how great Amber was with Max, and she knows Amber is smart. A more predictable storyline would have been hiring Amber to help out with Max, but I think this storyline could provide more interesting opportunities. I’m looking forward to seeing Amber make the most of this opportunity – she’s been through a rough patch, she confided in her mom that she needs direction and a life plan, and now she has a chance to find that. The moment between Sarah and Kristina, when they thanked each other for taking care of each other’s kids? (Sarah was babysitting Nora.) Brilliant.

Kristina had to attend a meeting on Saturday and Adam had to be at The Luncheonette, so that meant Haddie was forced into babysitting. She didn’t want to, and not for entirely unvalid reasons – she needed to study, and it’s not like Max is low maintenance. As Haddie pointed out, she helps them out so often but really couldn’t do it. I wish we’d been able to see just a tad more of what Haddie’s busy life is over the past few episodes, but we know she’s working very hard in her last year of high school so I could empathize with her character.

That meant Max’s trip to the museum was cancelled, and he didn’t take the news well. He badgered Haddie to take him, but when she refused and kicked him out of her room he took off on his own. The poor kid ended up in the wrong part of town, and Haddie felt awful for losing him. Adam came home, but Kristina’s phone was off during the meeting.

Max’s return home was a fantastic moment. The police found him and brought him back safe and sound, and Adam and Kristina knew to give Max some space. But that meant no punishment, no acknowledgment that what he did was wrong. Haddie, frustrated and scared, blew up at him. I thought it was just so well done, and Sarah Ramos perfectly portrayed all the feelings Haddie had. She was upset because she’d been so scared for Max and he didn’t care, he couldn’t care. She was upset because he makes her life so difficult, and because it’s unfair. And immediately after yelling at him she knew she shouldn’t have done it, because none of this is his fault. But she’s only a teenager, she has a lot on her plate, and it was normal for her to lose her temper. Anything else would have felt disingenuous and too saintly. I was glad Adam understood, too. It was a nice moment for the whole family.

You could interpret this storyline as making Kristina feel guilty for being a working mom – but don’t many mothers feel a little guilty when they return to work? I think it’s a pretty normal thing, and I don’t think Kristina wallowed in guilt for too long. She simply wondered how they were possibly going to make this work. Instead, the Max situation also tied into Kristina’s feelings about Adam and Rachel. Her phone was off because Rachel had called to apologize, and she was angry. Rightly so – Rachel was trying to do the right thing by calling but, oh man, that girl is a flake. Hearing from her just reminded Kristina how mad she was. So she turned off her phone, and missed a slew of phone calls about her missing son. And that’s how Parenthood got me on board with this storyline – I like how they go the less predictable route. Instead of blaming Adam for everything, she took the high road. She called Rachel and said what happened could never happen again, and she seems to have moved on from it.

In another unpredictable move, I loved what I saw with Sarah and Mark this week. They took care of baby Nora for the day, which was both exhausting and fun. But when Mark said “I can totally see having a baby with you,” I was so worried the storyline would go the Lorelei Gilmore route – that Sarah would feel like she was done having kids, and therefore being in a relationship with someone who wanted to have a family couldn’t be. That happened with Luke and Lorelai, a little, and one of the dangers of having Lauren Graham (who I love) in this role is that it can get a bit too reminiscent of her past, somewhat iconic character.

But when Mark asked how much his statement freaked Sarah out on a scale from one to ten, she mulled it over and answered “Two.” Sarah is open to the idea of more kids, and she’s open to the idea of having them with Mark. I’m so happy the show didn’t have Sarah get back together with Seth, because I really do want to see this relationship continue. I’d love to see these characters commit, move in together, maybe get married. I want that for them.

Meanwhile, it still looks like Julia and Joel might not be getting Zoe’s baby – though I think, in the end, they will. Zoe came by to tell Julia that her Loser Boyfriend really is a good guy, but Julia stayed firm. She can’t buy the baby, and she doesn’t really want Zoe around Sydney because it’s difficult to explain. And it’s too bad, because she would have been a great mom.

Then Zoe came back, tearful. She’d told Loser Boyfriend that she disagreed with him, and he kicked her out. She had nowhere else to go, and Julia welcomed her in with a hug. Even though she knows they might not get the baby, she was there for Zoe – and even though this storyline has had some problems, the way Julia has acted towards Zoe has redeemed it for me.

This episode was fantastic overall because, like the other storylines, I loved how Crosby and Jasmine’s story arc was handled. In the wake of their affair, Jasmine is feeling like crap. Jabbar revealed that she’d cried during Finding Nemo, even though he wasn’t supposed to tell Crosby. And when Jabbar fell and sprained his wrist, Crosby found out that Dr. Joe left great seats at a football game to come attend to him. Crosby could see what a good guy Joe is, and he knows Jasmine deserves that. So he told Jasmine. He told her that she deserved a guy like Joe, and that she shouldn’t tell him what happened. And you know what? I agreed with Crosby.

Crosby knows he screwed things up by cheating on Jasmine, whether he should have confessed his affair to her or not. And he’s seen the repercussions of Adam telling Kristina about the kiss. Yes, Jasmine was wrong to sleep with Crosby when she’s dating Joe. But if it’s truly over between her and Crosby now, then she should be with Joe. If she can fully commit to him from here on out. It’s a grey moral area, but I understood where Crosby was coming from. He just wants Jasmine to be happy, even if that means not being with him.

What did you guys think of “Missing”? Here are some other little nuggets from the episode that I loved:

Parenthood: Max On The Run
https://haligonia.ca/parenthood-max-on-the-run-49821/