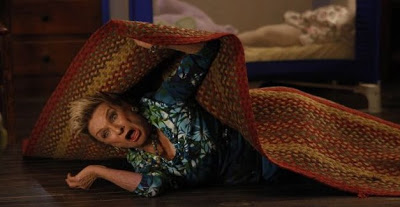 I find Raising Hope is a difficult show to review, because at its best it is simply a quirky, enjoyable comedy and at its worst the jokes just don’t land. Sometimes it’s a mix of both. I liked “Bro-gurt” quite a bit, and yet I find I don’t have much to say about it.

The cold open was hilarious, with everyone but Burt hiding from their clingy neighbor Andrew. The episode saw the whole gang try and earn millions by winning an invention contest hosted by Andrew Dice Clay, but it ended up being a scam. The ideas were, of course, awful. Virginia’s invention was to strap two sponges under your armpits to soak up sweat instead of wasting tens of dollars per year on deodorant. Burt and Andrew came up with “Bro-gurt”, a line of yogurt marketed to men with flavors like meat, Scotch and cigars. And Jimmy and Sabrina teamed up, and then butted heads, hashing out Jimmy’s idea for a mop attached to a baby. Even Maw Maw got in on the action, coming up with already invented ideas but slightly altering the name. Her best line though, was “A TV channel just for news. Wait, they’d have to fill up too many hours, and resort to sensationalizing non-issues and stirring up partisan bickering. Terrible idea.”

For those who are big Jimmy and Sabrina ‘shippers, when Jimmy finally lost his temper over whether the baby mop should have a handle, Sabrina found it “kind of hot”. And Jimmy realized he shouldn’t put Sabrina up on such a pedestal. It seemed like the writers realized they needed to even things out between these characters before putting them in a relationship, something I’m all for.

What did you guys think of the episode? Any favorite quotes?