So it was a non-elimination leg. And then it didn’t matter, because my beloved Bill and Cathi never managed to make up that ground and we eliminated at the next pit stop anyway.

I was really rooting for those guys. They were funny, they were cool, and they looked damn good in skimpy bathing suits. Without them, I’m feeling a tad indifferent about who should ultimately win this thing – but more on that later, let’s talk about this leg of the race.

The remainder of the last leg wrapped up quite quickly, with Andy and Tommy and then Bill and Cathi scoring their twelve points in the bodybuilding challenge, heading to the pit stop, and thus being sent on their way by Phil. Bill and Cathi weren’t even told they’d have to do a Speed Bump, so it was only kinda-sorta a non-elimination leg. (Although still, once again, no one was eliminated.) Bill and Cathi knew they had some catching up to do though, and fast! “We’re going to have to put the pedal to the metal,” declared Cathi. “…As safely and legally as possible.” Oh Cathi, just wait til you see the Roadblock!

The teams stayed in Belgium this leg, and had already taken off for the Roadblock – one team member would have to (or get to, depending on your own personal interests) drive a Ford Mustang through a series of performance maneuvers. Sadly and stereotypically, all men completed the challenge.

Amani and Marcus got lost on the way to the track, giving other teams a serious head start. Ernie began first and had a big lead, but after trying and failing one of the maneuvers about 15 times, Jeremy arrived. Ernie still managed to finish first, but Jeremy made up a lot of time and was a close second. It might have had something to do with the guys’ very different takes on the task. “I have never felt so scared for my life,” Ernie told Cindy after the task. “I have never felt power like that before,” Jeremy told Sandy. 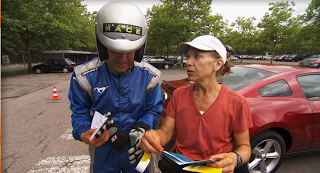 Marcus and Tommy arrived at the same time and both seemed to do quite well, and they were finishing up as Bill arrived. Bill also seemed to have an easier time than poor Ernie had.

Then we were treated to some more weird religious stuff from Team Snowboarder. It turns out that Tommy would like to do the more physical tasks because he blew one of the mental challenges (the dramatic poetry reading). Andy agreed to that, but he felt a little jealous that Tommy got to drive a cool car instead of him. But then Jesus came into his body and sucked the sinfulness out, or something creepy like that.

After driving the Mustangs, teams headed to Gent for the Detour – Water or Waffles. In Water, teams had to build a raft using barrels and logs and use it to retrieve two halves of a clue from a nearby river. In Waffles teams had to assemble a waffle stand and recreate all the different waffles it offered. Waffles sounded like the easier task, but the teams who opted for Water seemed to complete the Detour quicker.

Ernie and Cindy arrived first and opted for Waffle. They struggled to build the cart, and when Jeremy and Sandy arrived they managed to assemble it much faster – it turned out that height was an advantage here. They still managed to finish first, but Andy and Tommy breezed through Water and left right on their tails. As they departed for the next task, Cindy asked “Did we just leave those waffles burning in there?” “Yes we did,” replied Ernie. Hey, they are in a race!

Amani and Marcus struggled with the raft building, but they still managed to leave before Jeremy and Sandy who couldn’t figure out what was wrong with their waffles. Amani and Marcus gave Bill and Cathi a few raft-building tips before taking off, but my favorite team was still stuck in the back of the pack.

Where’s Mike Tyson When You Need Him?

The final challenge of the leg required teams to release a flock of homing pigeons and then race to their destination, where a tiny clue attached to the pigeon’s leg would lead them to the pit stop. This is where Ernie and Cindy blew their lead and got lost looking for their pigeons, making way for Andy and Tommy to score yet another first place finish.

Not only did Andy and Tommy win a couple of Mustangs for coming in first, but this was their sixth first place finish. The record for the most first place finishes is seven, held jointly by Nick and Starr and Meghan and Cheyne. If Andy and Tommy can win the final two legs (which they very well might) they could set a new, very difficult to beat record.

Jeremy and Sandy placed second, and after finally locating their pigeons Ernie and Cindy came third. In a predictable ending, Amani and Marcus secured the fourth place spot and Bill and Cathi were sent home, charming montage and all.

So with my favorite team out of the running, I’m not really sure who to root for. I don’t think anyone can deny that Andy and Tommy deserve to win. They’ve won a ton of legs and are generally good guys. But it would be a predictable ending to a lackluster season, their uber-religious attitudes freak me out a little, and they aren’t as charming as some past top-notch competitive bros like BJ & Tyler or the Globetrotters. If I root for the team I find most likable, I guess it would be Ernie and Cindy or Amani and Marcus…I like both those teams, but don’t find either of them charming enough to override their mediocre performances in the race. And I think we can all agree that Jeremy and Sandy would be incredibly disappointing winners, yes?

So what did y’all think of the episode? Were you crazy bummed to see Bill and Cathi eliminated? Who are you rooting for now?

The Amazing Race: Here We Go A Waffling
https://haligonia.ca/the-amazing-race-here-we-go-a-waffling-49714/