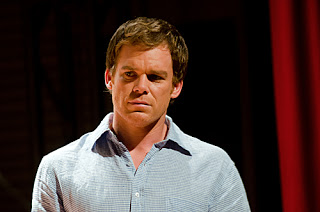 It took finding Professor Gellar’s corpse in a freezer for Dexter to realize he’d been so, so wrong about Travis.

My problem with this season of Dexter was that it seemed like the writers wanted us to be unsure of whether Gellar was alive when it was so painfully obvious that he wasn’t. They didn’t do a good enough job of keeping us guessing. They wanted us to be in Dexter’s shoes, to be waiting with bated breath for Dexter to close in on Gellar and kill him, but instead we were just waiting for him to finally see the light. I don’t care that it made Dexter stupid – if the mistakes Dexter’s making are intentional, then I’m intrigued by this storyline – I care that the writers think we viewers are that stupid.

I still can’t help but think that this season would have been stronger had the viewers been allowed to know, with certainty, that Gellar wasn’t real. If the viewers had been allowed to shake our heads and say “Dexter, what are you doing?” without wondering if it was the fault of the character or the writers. If Dexter is losing his edge as a serial killer, that’s a storyline I’m intrigued by. If the writers are losing their ability to write the show, that’s a problem. But I want to know which it is. 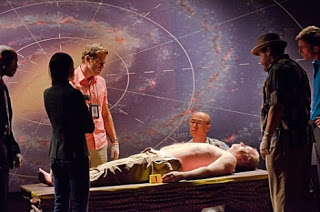 The latest Doomsday Killer tableau sure was a doozy – a famous atheist professor and author was killed and emptied of blood, insides, etc When his severed arm was raised Deb, Dexter and the rest of the gang were drenched in entrails. Disgusting, but that’s why we watch a show like Dexter.

Despite the major flaws, this season still isn’t a total write-off for me. The last few episodes of Dexter are always the best, and I’m holding out hope that something mind-blowing will happen. I want to be shocked the way I was when we saw Rita in that bathtub, and I really hope the writers can still manage to impress us like that. And not all the subplots are bad this season. 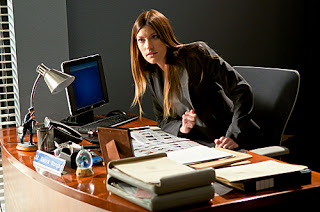 I like what’s been going on with Deb’s character. I like that the show is acknowledging that her character has had one hell of a life, and they’re digging into that with Deb’s therapy sessions. She’s also examining her relationship with her brother, and that could make things even more interesting should Deb ever find out about Dexter.

I like what’s been going on with Deb, LaGeurta and Matthews. It’s confirmed now that Matthews was present when the call girl died of an overdose, and now that Deb has met the poor girl’s dad she’s reopening the case and isn’t backing down. I like LaGuerta much more this season, as a villain who’s given to us in small doses, than I did when she was involved in a dull romantic plotline with Batista.

And, I like what’s going on with Jamie and Louis. Louis has continued to be helpful when it comes to the Doomsday Killer case by tracking down the IP Address used to publish a new post to Gellar’s blog. (Helpful tip for Miami Metro? You may want to invest in a computer whiz, IP addresses are pretty basic stuff.) He’s desperate to impress Batista, but he ended up impressing Jamie herself by admitting that her big, scary, gun-toting brother scares him. They ended up having sex at his geeky apartment, a place he admitted not a lot of people get to see. Cut to a shot of the Ice Truck Killer stolen evidence he’d helped Masuka out with. Yep! We all knew Louis wasn’t simply a nice, geeky dude who was impressed by Dexter’s prowess as a lab tech, so I’m interested to see where this is going to go.

I don’t like the Batista/Quinn storyline. Quinn is a trainwreck, and he’s dragging Batista down with him. But where is this going? I’m not into the “Miami Vice: Douchebag Edition” segments we get with those guys, even if it was a little funny to see Quinn face the woman he’d slept with in revealing, sober daylight. It’s time to move this story forward, whether that means offing one or both of these characters or what.

Dexter: Too Little, Too Late?
https://haligonia.ca/dexter-too-little-too-late-49708/