Critics who’d seen last night’s episode of Glee, “Asian F”, in advance said that it was one of the best episodes of Glee in a long time, a return to the show we used to know and love – and they were right. The episode was definitely the best of the season so far (which, I know, has only just begun).

There was so much to love about “Asian F”. It highlighted character we hadn’t seen much of before (Hi, Mike Chang! You’ve sure come a long way from “Other Asian”! And omigod you can sing!) to Emma Pillsbury and Brittany S. Pierce, two of my favorite characters who haven’t exactly been overlooked, but aren’t showcased every week either. The episode also hit the perfect balance of typical Glee quirkiness (Ginger supremacists and insane performances) and really moving storylines, and it walked the tightrope of featuring both new, fun songs and Broadway classics. The episode didn’t feel cluttered or forced. (With one flaw – Santana is suddenly back in the glee club with no explanation? Or did I miss something?) It was just right. If Ryan Murphy can pull off more episodes like “Asian F” this season, then Glee will officially have won its way back into my heart. 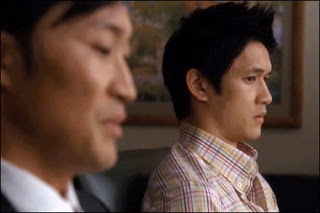 The name of the episode came from Mike, who was facing a ton of pressure from home after getting an “Asian F” (an A-) on a chemistry test. His dad had big dreams for Mike to attend Harvard, and thought that dancing, glee club and Tina were all serving as distractions. (At first Papa Chang assumed the poor grade must be the result of drug use and demanded Figgins test his son for drugs.) Mike promised to get a chemistry tutor as long as he could stay in New Directions, but the tutoring session was at the same time as his audition for West Side Story. Little did we know, Mike had been working on his singing so he could audition for a bigger part.

The pressure started to mount as Mike had to add teaching Schu’s booty camp and coaching the football players on their dance moves to his already packed agenda, all without letting his grades dip below perfect again.

The scene where Mike expressed his feelings about the pressure he was under, from his dad to become a doctor or lawyer or something, and then from himself and Tina to pursue his dreams, was downright beautiful. He decided to bail on the tutoring session and audition for the musical – and damn, was he good! Seriously, I think every single straight female and gay male viewer of Glee fell in love with Harry Shum Jr. this week.

And just when I thought Harry Shum Jr. couldn’t knock this episode any farther out of the park, the scene with his mom happened. She confronted him about missing his tutoring session and putting her in a position where she had to lie to his dad, and Mike admitted that he’d been at his audition since what he really wanted to do was dance. His mom confessed that she’d given up on her own dreams (of dancing!) to go the practical route, and she wanted her son to pursue his. (Cue the “Awwwww”s.) They agreed to tell his father about his choice together, and then he danced with his mama. It maybe sort of brought tears to my eyes. But, you know, only because I happened to choke on  my snack at that very moment. Total coincidence. 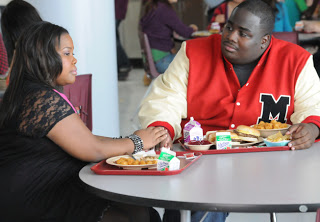 Mercedes got some great material in this episode, even though jealousy, defensiveness and competitiveness are not great colors on her. I think the show has done a good enough job of helping the audience understand why Mercedes feels the way she does, so her bratty behavior wasn’t completely out of nowhere. No one likes feeling like the runner up all the time, and Mercedes has played second banana ever since glee club began. Hell, she’s even got competition for second-best from Santana. She knows she’s good, but she keeps getting outshone by Rachel.

Now, that’s not to say Mercedes’ behavior was excusable. We already know enough about Rachel, I think, to know that Rachel kind of is better than Mercedes. At least most of the time. She works harder, she cares about perfection more, she wants it more. And it shows. 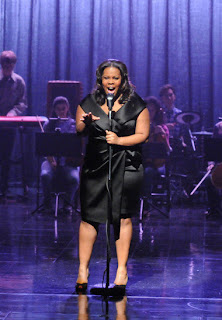 Mercedes is finding her own confidence, though, thanks in part to her boyfriend Tinker (OK fine, his name is Shane…but I want to call him Tinker) and she put everything she had into her audition for the lead in West Side Story. And the directors didn’t know who to choose – Rachel or Mercedes. My one problem here was that although Mercedes’ rendition of “Spotlight” was well done, it didn’t scream “Maria” to me. I didn’t feel like she was playing a role, she was just being a more confident, fiercer version of herself. That’s not Maria. Mercedes really never showed that she could pull off a young, wide-eyed girl madly in love with the wrong guy. I kind of wish that at the call back, Mercedes and Rachel had both been asked to sing with Blaine – that would have shown who was truly better for the role.

Instead, the directors had both girls sing “Out Here On My Own” from Fame (but I do love that song) and when they still couldn’t decide, they double-cast the role. Mercedes just wasn’t having that, and stormed out of the office. We caught a glimpse of Mercedes’ diva-like behavior last season, but this time it made more sense – she really wanted to beat Rachel.

The diva-life ‘tude continued at booty camp, where Schu had been pressuring her to work harder on her dancing. She took every criticism as a personal attack, even though other decent dancers like Quinn and Santana were present at the class. When she couldn’t nail a move and complained of a sore ankle, she stormed out – but not before an amazing fantasy-sequence style performance of “It’s All Over” from Dreamgirls. Seriously, it was so damn good you guys. The song perfectly fit the moment, especially since Mercedes’ man had told her she’s Effie White, not Beyonce. Mercedes was frustrated, sick of being second-best, she felt ganged up on and she ended up quitting New Directions and offering herself up as star of Shelby’s new glee club.

Now, in the performance of “It’s All Over”, Effie is supposed to be secretly pregnant and there are some lyrics meant to suggest that. But it felt like maybe there were some other hints, too. Is Mercedes pregnant? How do we feel about this?

Brittany (and Kurt and Rachel) 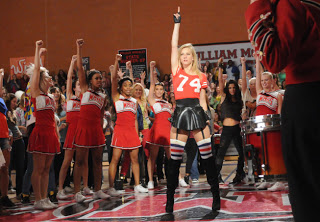 Y’all know I love me some Kurt, but I just have to get this out: BRITTANY S. PIERCE FOR SENIOR CLASS PRESIDENT! OK, thanks. I mean, I love Kurt and all but how can you not root for Brittany in this? First of all, she could use the self-esteem boost. Second of all, that dancing was sick. And her whole “Run The World (Girls)” thing was great since she’s running with the campaign that it’s been far too long since McKinley had a female senior class president. 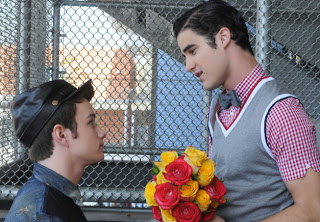 With Brittany presenting herself as a serious contender for senior class president it was a hard week for Kurt Hummel – especially since he knew Blaine would be getting the lead role in West Side Story over him. Thankfully, Kurt went the supportive boyfriend root instead of the Mercedes petty and jealous root, and presented Blaine with a congratulatory bouquet of flowers before the casting decisions had even been announced. An even sweeter moment came when they hugged after the decision was made official.

Making it an even harder week for Kurt, Rachel decided to throw her hat into the political ring when it looked like she wasn’t going to get the role of Maria. She needed something good for her NYADA application and was desperate to do anything – even if it meant hurting her friend. This competitive, narcissistic streak was classic Rachel Berry, but it didn’t make her seem as hateful as it used to. Maybe Rachel has just grown on me, but I kind of saw where she was coming from – even though I thought it was totally crappy and think she should pull out of the race. She said she thought Kurt would understand since they’re both so competitive, and I kind of thought she had a point. Kurt was also only really running to be able to put it on his college application, and I thought saying he was doing it to “change the school” was self-righteous.

Meanwhile, I think Will got one of his best episodes yet this week as he hit on a touchy subject with Emma. Despite their relationship getting pretty serious, Emma still hadn’t introduced Will to her parents and he assumed it was because she was embarrassed of him. (Sidenote: When he found her secret stash of wedding magazines, was he really trying to make her feel better by trying to show her his own secret stash…of porn?! I kept waiting for his box to also be filled with wedding ideas, but it never happened and now I need industrial strength bleach to get that image, and the line “Guess who woke up before I did?” erased from my memory forever.)

After getting some advice from Bieste (I loved her more prominent role in this episode) to grab the bull by the horns, Will decided to take the initiative to invite Emma’s parents over for dinner. Oops! Big mistake, since her parents are awful. Not only are they “ginger supremacists” who only want redheads to procreate with other redheads to preserve the species (and they go to a “Gingers Only” country club) but they were really insensitive about Emma’s OCD. It gave some really good insight into why her OCD was able to get so intense.

Now, you could read too much into the scene where Will, as he knelt next to Emma as she prayed, sang about “fixing” her. But you know what? If you do, I think you’re overreacting. It’s a lovely song and I think it’s about trying to help someone who’s hurting, and that’s what Will wants to do for Emma. He wants to help her, he wants to make her happy. There have been plenty of other opportunities to hate on Schuester in the past and I’m sure there’ll be more, but I thought this was a really sweet moment.

So what did you guys think of “Asian F”? Which performance was your favorite? Honestly, I can’t choose – but my favorites were “Cool”, “Run The World (Girls)” and “It’s All Over”. I felt like “Spotlight” was great, but it didn’t quite have the “Wow!” factor it was supposed to have for Mercedes – it doesn’t feel like that challenging of a song. And although we were supposed to believe that Mercedes was a clear winner in “Out Here On My Own”, to me it seemed like the girls really were pretty equal in their performances. And “Fix You” was a good way to end the show, but just didn’t compare to the bigger numbers.

Now, here are some of my favorite lines from what I think was an outstanding episode:

Glee will be gone until November 1st because of baseball (SO unfair), but when we return something interesting will be going on with Puck and Shelby. I, for one, can’t wait.