Tonight at Park Lane a local feature is screening. Nothing too out of the 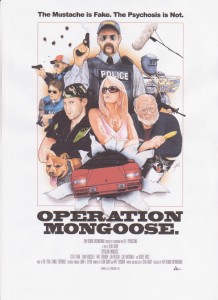 ordinary, except this movie took five years to make and almost claimed the life of its director. Check out this quote from The Coast:

Take the plane scene. Grady took a camera into the skies on a rickety old plane owned by a family friend. Two weeks later, the friend died when that same plane crashed. “The very last time it went up and down successfully, I was in the front seat,” he says.

For that reason alone (and the fact that it looks hilarious and is FREE) you should wander down to the theatre at 7:30 PM to catch the premiere of OPERATION MONGOOSE.

It’s your chance to see a local-ish (it was filmed in New Brunswick and features a bunch of Nova Scotians) movie and support its cast and crew as folks see it for the first time. I have a feeling this screening is going to be pretty amazing and may have to sport a fake mustache in solidarity. So if you see a girl sitting by herself, rocking some awesome facial hair, don’t judge.