Is it just me, or was there less excitement about the Golden Globe Awards than usual this year? Sure, I was looking forward to watching the red carpet and seeing Ricky Gervais take a second stab at insulting as many people as possible, but I really didn’t know much about the nominees.

I was struck with a case of laryngitis this weekend (seriously, y’all, I’ve been sick off and on for about three weeks – it’s madness) but luckily I spend 99% of my time online anyway, so my vocal inabilities didn’t matter. I was on Twitter and the FPQT live blog chatting up a storm about my favorite gowns. There were a few that elicited a strong reaction, be it positive or negative, but for the most part I felt rather underwhelmed. Anyway, let’s kick things off with some of the worsts.

As basically anyone with the Internet, a television, or a magazine subscription knows, this was a great year for women in comedy. We had Bridesmaids, Parks and Recreation, this redhead called Emma Stones and a bunch of other fabulous women making us laugh. But why must so many of them fail when it comes to the red carpet? It’s so disappointing! 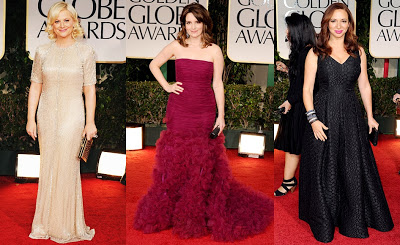 Why must Amy Poehler always wear something shiny, yet frumpy, with sleeves? She’s an attractive woman! She could look so much better. Now, for Tina Fey, that plum dress isn’t so bad. But only because her fashion history is so bleak. And I’m sorry, Maya Rudolph, but snakeskin print and pleats are not your friends. 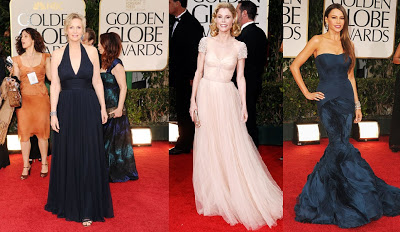 I often like what Jane Lynch wears to awards shows, but this was far too plain for my liking. And Julie Bowen? Well, she wasn’t exposing her entire sternum for once, but she kind of looked like she was auditioning for Glinda the Good Witch in Wicked. Sofia Vergara looks beautiful because, well, she is – but I’m not personally a fan of fishtail gowns (and there were A LOT last night) and I feel like we’ve seen her wear this gown before…two at least three other awards shows. 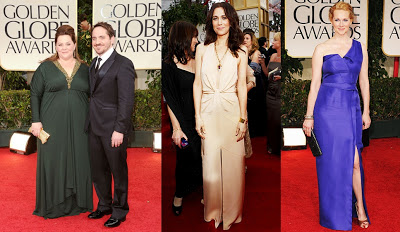 At first I liked Melissa McCarthy‘s gown, but when I saw photos again this morning I wasn’t sold on it. I like the neckline, but I wish the color had been richer and less subdued. Now, Kristen Wiig falls into the Tina Fey club – a hilarious lady who I adore and admire, but damn, she never looks good. Her dresses always seem drab and ill-fitting, and why does she hate color? Also, I think she looks better with a bob. Laura Linney almost got it right – I love the vibrant color of the gown, but I don’t think it fits her very well. Someone needs to offer their tailoring services exclusively to the comediennes of the world.

The red carpet has become such a sea of nude, blush, cream and metallic gowns that whenever I see a celebrity in a vibrant color I immediately want to love the dress. But that can’t always be the case. 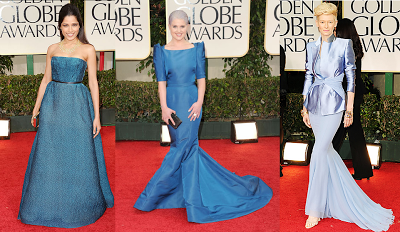 I really wanted to like Freida Pinto‘s gown. She’s basically the most beautiful person ever, it was a gorgeous color, and up close the fabric was very interesting. But what was with that fit? The proportions were very strange. Now, I don’t know when the world decided it was OK for Kelly Osbourne to be a fashion critic, but I’d like us to collectively reassess this development. The girl dyes her hair grey. Anyway, I thought her gown looked matronly – especially with that hair! And Tilda Swinton, I know, you can’t really fault her. She’s obviously trying to look like David Bowie, so what do I expect? This is probably the most normal outfit I’ve ever seen her in. 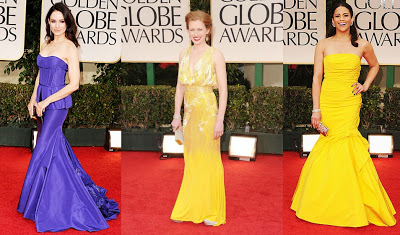 Did Madeleine Stowe show up in character? She looks exactly like Victoria Grayson would on Revenge. I loved the regal color, but I thought the cut of the gown looked a little severe. I loved seeing yellow on the red carpet, but I thought Mireille Enos‘s dress was ill-fitting and, again, since fishtail gowns aren’t my thing I wasn’t in love with Paula Patton‘s gown either. 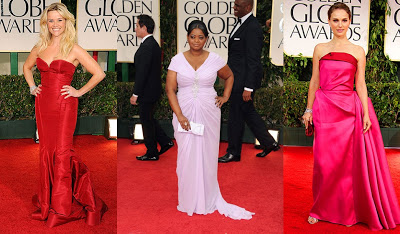 I’m a big fan of Reese Witherspoon and I like that she always mixes it up on the red carpet, but for me this look was too Jessica-Rabbit-wannabe. As for Octavia Spencer, I really wanted to like it…I did, trust me. But I just don’t think ruching is a plus size gal’s best friend. And what’s going on with Natalie Portman? Is that dress being held together with safety pins? Why is it so ill-fitting?
A Case of the Blahs

Some gowns weren’t total atrocities, they were just boring. Case in point, these women. Amanda Peet‘s gown looks like she made it from the curtains hanging in her grandmother’s living room. Jessica Biel, who I find tragically dull, looks like she came from her wedding…which took place in 1893. I was so disappointed with Katharine McPhee – she’s gorgeous, she’s promoting her new show which is supposed to save NBC, and that’s what she wears? She couldn’t fade more into the background if she tried. As for Mary J. Blige, I’m ready to see that drab type of feathered gown permanently retired from the universe. Also, I’m sorry, but I just don’t think it’s possible to look classy or elegant with those arm tattoos.

There are few people I love as much as Connie Britton. I basically model my life after Mrs. Coach on Friday Night Lights. And I’ve seen her look great on red carpets before, so I can only assume that someone spilled coffee on her real Golden Globes gown, and this pleasant, basic dress was what she’d picked out to wear to bunch the following morning. As for Heidi Klum, well, take away that necklace and she’s basically wearing a nude sack. Nicole Richie‘s hair looks great, but can we discuss why she was even there? She’s nobody! Anyway, her dress felt recycled…literally, from used tin foil, and also I think it’s too reminiscent of Gwyneth Paltrow at the 2011 Oscars. I had high hopes for Shailene Woodley – she’s young, hot and her performance in The Descendents was great. She should have seized this moment with a fun, youthful dress. Instead she wore a nothing color and a gown that mostly just had people wondering if a wardrobe malfunction would occur. 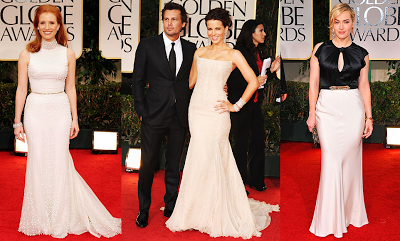 I don’t love or hate any of these dresses, they simply make me yawn. Jessica Chastain had a really big year, and I just hoped she’d stand out more on the red carpet. There’s nothing wrong with her gown, but it’s certainly not memorable. As for Kate Beckinsale, I simply don’t think it’s possible to look more boring. Strapless, A-line, in a nude color? Why show up at all? Kate Winslet, as always, looks nice. But I couldn’t bring myself to include her on my best dressed list. It’s just such a boring dress.
The Rest of the Worst
What, you thought that was it? Oh no, there’s more celebrities on my worst dressed list. Here they are: 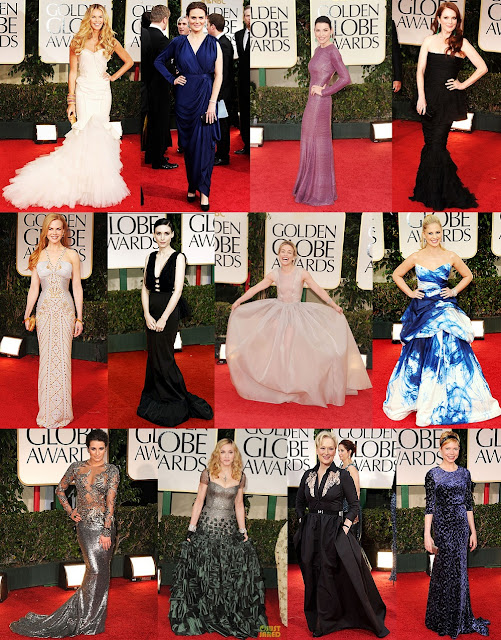 Elle MacPherson: I would sell my soul to the devil to look as good now, at 25, as Elle MacPherson does at age 47. But that poofy-bottomed dress just doesn’t do it for me.
Emily Deschanel: The one arm, the drapy fit…it looks like Emily’s wearing a fancy bathrobe, not a gown.
Julianna Margulies: I find the color of this gown kind of drab, and with the painfully simple cut it makes Julianna’s gown a red carpet fail for me.
Julianne Moore: What is going on here? Take a closer look – it’s like a fishtail gown with a tutu overtop.
Nicole Kidman: Blech. She looks trampy. Did she use bedazzle those studs on herself?
Rooney Mara: I went back and forth on whether I liked this dress. I find it weird that Rooney either appears on the red carpet as Audrey Hepburn reincarnated, or as Lisbeth Salander. The hemline was too long, and the look was too severe, so this gown ended up on my worsts list.
Piper Perabo: Oh, how I hate this gown. The sheer top, the giant skirt, the look on her face. All wrong.
Sarah Michelle Gellar: This is what happens when you allow your toddler to choose your gown. Imagine that on stage with Piper Perabo? There was barely room for them. I think that fun fabric could have worked with a sleeker silhouette.
Lea Michele: This was one of the absolute worsts of the night. I’m usually a Lea Michele apologist when it comes to her red carpet appearances, but there’s no defending this trashy looking gown.
Madonna: I think this was my Worst Look of the Night. Her overly muscular arms were bulging out of those cap sleeves, her breasts were squeezed into the bodice so tightly it looked painful, and the skirt looks like it was cobbled together with leftover fabric from someone else’s gown.
Meryl Streep: Did Meryl think she was attending a fancy rodeo? What the hell?
Michelle Williams: I want to like Michelle Williams, I really do. She has a cute pixie haircut and takes Busy Phillips (Cougar Town, Freaks and Geeks) as her date everywhere. Yet, there’s something about her that makes me want to barf. That dress looked dowdy and her headband looked like it came from Lululemon.
What do you guys think? Who looked the worst? And don’t forget to go check out my post on the best red carpet fashions from the night!