When I was younger my preferred reading was comic books. I really enjoyed what were considered boys’ comics, including those with a war theme. I guess it might have been because my dad was in WWII. Often what attracts me to graphic novels are the covers more than the subject matter. I don’t know how it wouldn’t be that way; the art work is both the focal and selling points to these novels. They say that history is written by the victors, these novels offer just a few of many stories available. Have a gander at these titles:

Maus: a survivors tale (M) and Maus II (M) by Art Spiegelman. Maus is one of the first graphic novels that I read in my adult life. It is a fabulous example of what can be done with this art form. It is a biography of the author’s father, Vladek Spiegelman, a Polish Jew and Holocaust survivor. It is very interesting to me that the artist depicts the Jews as mice and the Nazi soldiers as cats. The complete work was published in two volumes; the first in 1986 and the second in 1991. In 1992 it won a Pulitzer Prize Special Award. The New York Times stated : ” the Pulitzer board members ….found the cartoonist’s depiction of Nazi Germany hard to classify’, thus the category of Special Award .

Another biographical graphic novel is Alan’s War : the memories of G.I. Alan Cope (M). Award winning author Emmanuel Guibert met Alan Cope by chance in 1994. This led to a friendship and this book. Cope is just an ordinary Joe who finds himself in Prague during the final days of WWII. This was a time when Russia was trying to claim lands in the post-war era. This novel continues past the war into Cope’s later life. One review states “this is a kind of complimentary opposite to Maus: a story about a man who war transformed into something better: tolerant, cosmopolitan, observant, and humane”. (Cory Doctorow via boingboing.net)

Two Generals (M) by Scott Chantler is a graphic novel that is being used in some Ontario schools as a textbook. It is also on the top 40 list for the 2012 Canada Reads selection. In 1943 Chantler’s grandfather, Law, shipped out with the Highland Light Infantry to fight in WWII. He and his best friend Jack would find themselves fighting in one of the most important battles of the war, i.e The Invasion of Normandy. Wonderfully researched, this tale of friendship and war is well worth a read!

Best of Battle (M). Battle Comic books was the greatest British war comic! Unfortunately it stopped publishing in 1988. Collected here in over 250 pages are the results of many of the talented authors and artists of the British comics field. As reviewed by ReviewedOnline.co.uk “this collection is just a taste of the full bullet-riddled glory of Battle and proof that they still can excite like an wartime novel or film and fight back against nostalgic with all guns blazing.” 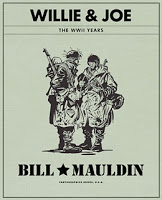 Willie & Joe (M) by Bill Mauldin, who was a two time Pulitzer Prize winner for his editorial cartoons. During his time in the 45th Infantry Division, Maudlin volunteered to work for the unit’s newspaper drawing cartoons. He created the characters of Willie and Joe, two regular G. I.’ s, who first began to appear in The Stars and Stripes newspaper. By 1945 the characters ‘ fame had spread so much that Willie appeared on the cover of Time Magazine and Maudlin himself made the cover in 1958. Charles Schutlz paid tribute to Maudlin on Veterans’s Day by having Snoopy dressed as an army vet visiting him to tell war stories and drink a few root beers. The Library has two volumes that show over 600 cartoons, a feast for the eyes and a voyage down memory lane for some.

Shannon Eric Denton is a veteran cartoonist with credits that include Disney, The Cartoon Network and D.C. Comics; along with the Oscar nominated animated feature film Jimmy Neutron: boy genius just to name a few. In the novel Grunts (M) Denton collaborated with Keith Giffen to bring WWII to life on the comic page. In a remote section of France, a combined troop of British and American soldiers push into German territory. The characters in this series are a bit stereotypical and the ten stories focus on each of the characters. This gives the reader an insight into who the soldiers are and how the mesh together as a team. If you like war stories, you will like this anthology, as it is filled with good themes and stories.

I know that I am cheating by including this but this comic strip influenced how I looked at the Vietnam War and the politics of the Sixties and beyond. There is a new and huge collection entitled 40: a Doonesbury retrospective (M) by G.B. Trudeau. It is here that I learned about Phred, a Vietcong soldier who gets lost with B.D., the typical red-neck soldier of the time. With this retrospective, you get to meet the characters 40 years later. Phred has become a wealthy business man in the new Vietnam. B.D. continues to show the horror and folly of war while he fights the war on Terrorism. Although there are there are probably less than 100 strips dealing with war in this 695 page book, I wanted to include it for us Baby Boomers.
Once again graphic novels are proving that you do not need a lot of words to tell a story. After all, isn’t the saying ” a picture is worth a thousand words”.