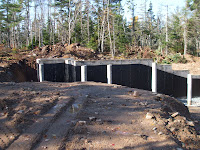 rouge went to visit the building site over the weekend and is excited to report that the land has been cleared and the foundation has been poured! It’s a wonderful piece of land that still has lots of trees 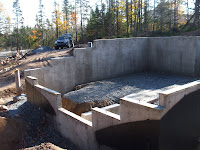 surrounding what will be the new house. Feels like being in the woods – very calm and quiet (if you ignore the blasting music from the workmen next door!)

Breathe deep….ahhhhhhh. I love the smell of the trees. 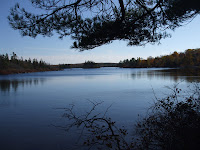 And check out the lake view. Not too bad, huh?

rouge also took the opportunity to nose around the model home in the neighbourhood that just happened to be having an open house. I’m not going to give you too many details, for fear of calling a specific designer/stager to the mat. And, I have no idea who that might be. But, I’ve just got to say that I was less than impressed.

The model home is quite nice from the outside, but the inside was very disappointing. It felt like all the $$ went into the structure, and that they had to cheap-out on the inside because of it. It wasn’t staged…just an empty new house. And sometimes that’s ok.

The problems were many — the layout of the home was strange and choppy, so the main living space felt much smaller than it is, and the fixtures and finishes were nothing to get excited about. In fact, there were some really strange choices. Didn’t seem to be that much thought put into it. The color selections were also questionable. (this is me, trying to be nice)