I finally had a chance to watch the two-hour season premiere of Grey’s Anatomy and I was pleasantly surprised. I really wasn’t sure if I’d stick with this show much longer (it’s already been relegated to weekend DVR viewing) but I definitely still dig this show. I mean, it is at times ridiculous – no one city experiences as many crazy disasters as Shona Rhimes’ version of Seattle. But we don’t watch this show for accuracy, we watch it for soapy relationship drama, and it got that right. 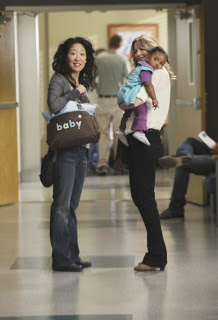 The most compelling relationship on this show is still that between Meredith and Cristina, and it was nice to see them each go as far as possible to help each other. Cristina orchestrated a clever cover up after Meredith basically kidnapped Zola, and Meredith convinced Owen to understand that Cristina was better off not having her baby.

And of course, at Seattle Grace the personal and the professional constantly overlap. Meredith was fired for the clinical trial mess; no one listened to April’s orders as the new Chief Resident; everyone hated Alex for getting Meredith fired. And in the midst of the aftermath of Seattle’s latest disaster, a giant sinkhole that swallowed up several people, there was a lot of fighting. So much that Bailey decided they needed “a Gunther” – a surgery that all the residents would be forced to cooperate on. One resident always stepped up as leader and became “the Gunther”, named after the first resident to do so, and everyone assumed it would be Cristina…until she made a careless mistake and almost killed Alex. So it turned out to be Avery! Good, that guy needed a boost.

I was wondering how the show would get out of the “Meredith is fired” pickle, and it turned out to be rather easy. The Chief took the fall for her, saying that he tampered with the trial to save Adele and that Meredith only tried to cover for him. He handed his diabetes trial over to Bailey and decided to retire. I bought the decision – after all, Meredith tampered with the trial because of their history together, and to try and save his wife.

At the end of the episode, Zola was taken away from Meredith so that social services could do an evaluation. After the loss of her job, her disappearance and the revelation that she and Derek weren’t living together, there were too many red flags. And despite all that, Derek is still being a jerk and refusing to forgive Meredith. Luckily, at least Owen and Cristina had some resolution – he held her hand during her abortion.

So, who watched the episode(s)? What did you think?