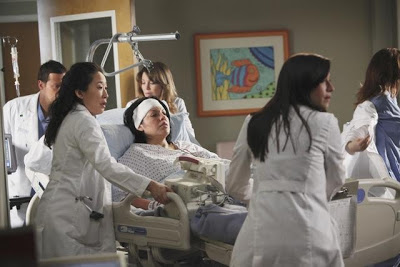 Grey’s Anatomy is back, and we’ve all agreed to pretend like that whole singing thing was just a bad dream. That’s what happens when you eat really spicy food late at night after watching DVDs of Grey’s and Glee. Right? Right.

Thursday night’s episode was all about recovery. Callie fought hard – a little too hard – to recovery from a post-accident traumatic brain injury, as the baby struggled to recover from being born way too early and looking like the offspring of ET and a robotic hairless cat. (Honestly, that baby seriously grossed me out for the first half of the episode. Then it became a real baby and, subsequently, totally cute.)

Callie pushed the boundaries of her recovery and ended up hurting herself even more, and she wasn’t the only one at Seattle Grace pushing boundaries. Two of our favorite residents crossed lines during the episode, ending up in that moral gray area that Grey’s does so well.

For Meredith, it was the decision to compromise the clinical trial by ensuring that Adele got the medicine and not the placebo. Adele’s Alzheimer’s is quickly worsening, and after the Chief lovingly thanked Meredith for everything she’d done for them, it was like she had no choice. Obviously, it was wrong in a lot of ways. The FDA could find out and shut down the trial, she and Derek could lose their jobs or licenses, and by switching Adele to the medicine Meredith gave someone else a placebo, depriving that person of the chance to be cured. But despite all that, it still felt like Meredith made the right choice. Or at least the choice most of us would have made as well.

Alex pushed boundaries even further when he tried to set up a program to bring kids from Africa to Seattle Grace to receive much needed (and totally cool) surgeries. Alex did it because Hunt had pressured him to have a “plan” in the Chief Resident race, but we all know Alex also cares about children. The problem, though, was money. First he solicited a bitchy, rich, dying patient (played by Doris Roberts, who was awesome) for a large donation. She died before Alex actually got the money, but he went ahead with the project anyway. Using a killer combination of burying his head in the sand and fraud, Alex was basically looking at jail time. Then the old bag came through – she must have called her lawyer right away, and she left Alex twice the money they’d negotiated.

Overall, I thought the episode was the perfect recovery from the musical disaster. We saw more of the side of Stark that April liked, and they shared a nice little moment. Or she did, at least – his feelings are still hurt. There was lots of great interactions among the docs as Callie and the baby recovered – I loved when all the docs snuck her into the NICU to see little Sofia Robbin Sloan Torres – and a really great moment with Bailey and Callie when it was time to take the baby home and Callie panicked about the two of them getting back into a car. I like the focus that’s being put on Adele’s storyline. One of the most heartbreaking scenes in the episode was when Adele begged Meredith to let her have Richard, thinking Mer was Ellis Grey. I also loved the scenes with Teddy and Henry, as she showed up on his doorstep with doggy bags after every bad date, only to show up one last time after going out with that stupid trauma therapist again. And Henry had set up a candlelit dinner! It was so sad.

Did you like the episode? Was it good enough to erase the memory of all that *shudder* singing? And are you excited about what’s to come? (I won’t ruin it for people who don’t watch the sneak peeks or look at photos online, but I’m psyched.)