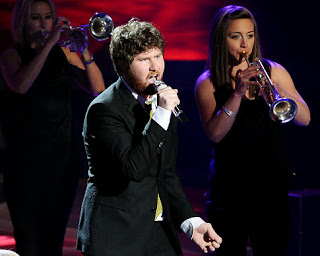 I’m late in writing about the American Idol results show this week since Thursday night comedies take priority – I’d much rather have Community, The Big Bang Theory, The Office and Parks and Recreation crack me up than watch cheesy musical medleys and Ryan Seacrest dragging out a 30-second task so that it takes half an hour.

But I’m all caught up, and I’m disappointed. I caught the last ten minutes of the show live, so I knew the actual results in real time. Poor Casey, standing in the bottom three with the two people I struggle to critique every week. I thought it might be Jacob’s week to go, but when he was sent back to safety I knew Casey was toast. I think Casey knew he was toast. I would’ve loved to see Scotty get eliminated so that he can go work on his hit country album, hit it big and I’ll personally never have to hear him sing again, but I knew that wouldn’t happen.

As for the rest of the show, it was OK. The group’s visit to the British consulate was cool, if only because there were a lot of famous people and I was surprised/impressed by Scotty’s British accent. The group medley was kind of painful, and also possibly featured an inappropriate hand gesture. Did anyone else catch that? Crystal Bowersox returned with nice new teeth and an enjoyable song. Then Bruno Mars sang “The Lazy Song”. I love Bruno Mars, I love this song, and I love the video for this song, and his (probably pre-taped) performance was awesome.

Casey’s swan song suited him perfectly. He wandered around the stage and through the audience, growling and kissing everyone. Except his own mother, that was a weird omission. But as always, she continued to beam with pride. I’m sad Casey is out this early, but he did pretty well in the competition considering he’d already been voted out.

What did you think of the results? Are Jacob’s days numbered now? And when did Scotty become known as “Scotty the Body”? And more importantly, WHY?