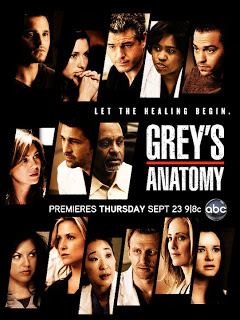 That’s the best word to describe the season premiere of Grey’s Anatomy, the episode that would prove whether the show could ever live up to the captivating, game-changing season finale. Heartbreaking.
There was a time when I’d considered breaking up with Grey’s. Izzie was seeing ghosts, the romantic entanglements started to feel incestuous and the plots seemed tired. And a lot of people did dump the show. But am I ever happy that I didn’t. The mass murder at Seattle Grace in the season finale back in May grabbed my attention and this episode, the aftermath, has kept it.
Everything about Seattle Grace is broken now. Everyone is broken, everyone is hurt, everyone is changed. People, relationships, careers.
All the docs at Seattle Grace have to be cleared for surgery by an on-site counselor, Perkins. This was a genius move – picking up a few months after the trauma and allowing us to see what the docs have been going through via flashbacks was so artfully done it was almost haunting. Though Grey’s Anatomy is just a silly TV show, that season finale was as emotionally distressing as some of the deeper movies I’ve seen, and the flashbacks brought back those same emotions in a way that perfectly mirrored what the docs were going through as they returned back to work.

Meredith and Derek have gone through a fascinating post-trauma change. For seasons I complained that he was the dull, dreamy responsible one while she was the frustrating, twisty, self-destructive one. It got old. But now, the roles are flipped. Meredith has been through enough trauma in life that she’s coping with the trauma remarkably well. Sure, Perkins wouldn’t clear her because he thinks she’s lying – and she is. She hasn’t told anyone (other than Cristina, April, and Hunt) about the miscarriage and that pain will surface at some point. But still, she’s the stable one. She’s dealing.
Derek has turned into an impulsive, reckless version of his old self. He’s regularly getting locked up for speeding. He abruptly quit being the chief. (Yay! Chief is chief again!! And he celebrated with the cutest dance ever!) He recommended a dangerous surgery without clearly communicating the risks to the patient. Meredith summed it up, both literally and metaphorically, when she told him “You’re driving awfully fast, Dr. Shepherd. The least you could do is wear a seat belt.” 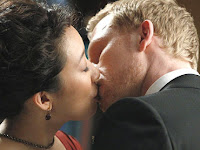 Cristina has changed too, and quite drastically. The biggest thing is that she married Owen. Yep, they’re married now. She wore a red dress and got married in Meredith’s house and it was sad, beautiful and perfect. The flashback to when Owen proposed was heartbreaking and really shed light on what Cristina has been going through – terror. She doesn’t want to be alone and panicked when Owen was just a little late coming home. She doesn’t care that she hasn’t been cleared for surgery yet – in fact, she really doesn’t want to. Cristina isn’t ready, but she hasn’t said that out loud. Instead she’s reading bridal magazines in the gallery and is telling Perkins that she just wants to be a simple girl. Because nobody holds guns to the heads of simple girls.
Meredith was worried about Cristina making an impulsive decision to marry Owen, and the best line of the episode was when she told her “Derek’s the love of my life, but you’re my soulmate.”
One of the most memorable and heartbreaking parts of the finale last season was Bailey’s storyline with Charles and Mandy Moore. It was chilling, and Chandra Wilson deserves an Emmy. Now. Wilson brought all the pain and fear she could muster to this performance with a subtlety that makes it extra emotional. One complication is that Bailey’s gentleman friend (was he her boyfriend?) at the time of the shootings was not at the hospital that day. He was playing golf. Before escaping to her parents’ place for a while, she told him “Eighteen people got shot. Eleven died, one of them in my arms. A boy died in my arms, and you were playing golf.” You don’t want her to hold it against him, and you know that she doesn’t want to hold it against him, but that doesn’t mean it’s not there.
One of the best Bailey moments was when she found all the docs having lunch in the basement and said “I’m real happy to see you all” and told Avery and April that she was sorry for the loss of their friends, and then handed out tasks same as always. And there was a sad moment from April (who has totally grown on me) when she told the gang she’d gone into the cafeteria and someone called her Reed and said “I thought you were dead”.
The trauma really took a toll on both Lexie and Alex as well. Alex is walking around with a bullet in his chest and a chip on his shoulder, acting like he’s such a bad ass. But even though Alex is back to being an ass, I still feel bad for him. He said it best when he told Perkins “I’ve had too much crazy for one lifetime.” So though he was a total jerk for ignoring Lexie’s major nervous breakdown, I can understand it given his complicated romantic past. Lexie called him out on his behavior though, telling him “You think you’re so bad ass because you lived. But I’m the reason that you lived. And while you were dying, you were crying out for the wife who left you. So that’s the opposite of bad ass, for what it’s worth.”

Speaking of Lexie, she’s dyed her hair back to brown and had a huge fit in the hospital that landed her in the psych ward. She’s supposed to be better now, but I’m not sure. And I need her back with Sloan ASAP. Seriously. Like, next episode. I love them together. No one on Grey’s has grown on me as much as Sloan has. Oh, and Callie asked Arizona to move in with her – that was pretty adorable.
I think this episode was so strong that it’s actually on a par with the finale, albeit in a different, quieter way. It was the perfect follow-up, it was exactly what needed to come after the most intense two hours of television viewing in the history of my life. And I’ve watched a lot of television. What did you think of the episode? Do you like the shake-up the mass murder has given Seattle Grace? Are your hopes as high as mine for this season of Grey’s?
(Grey’s Anatomy, S07E01, Aired 9/23/10)