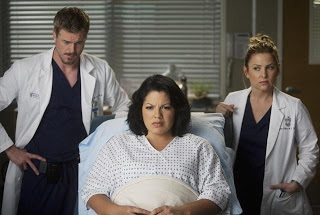 …what a lovely way of saying how much you…tolerate me?

Grey’s Anatomy was back this week, and Arizona told Callie’s that she’s in – she’ll raise Mark Sloan’s baby. Of course, even after she gave her answer both she and Callie had their doubts. Arizona pulled Teddy aside to say “I might be having Mark Sloan’s baby”, to which Teddy hilariously responded “Oh good lord, he got to you too?!” and Callie channeled her fears about trusting Arizona into fears that something was wrong with the baby.

Now that Arizona is 100% on board with Callie, Mark and baby, I’m more on board with this storyline. I’ve always liked Mark and Callie together as friends, and I like that this wacky threesome will have a baby bonding them forever. Watching Arizona and Mark calm Callie and she freaked out over the unlikely possibility that something was wrong with the baby, I thought “This works.” The real loser in the situation is Lexie. Poor, poor Lexie. Mark was awful at breaking the news to her! “So, Callie’s pregnant”? He said it like it was juicy gossip, not relationship-altering news! And, of course, Lexie freaked out, screaming that she can’t believe he got her into this situation twice. Like I said, poor Lexie.

On a sidenote, what’s up with Callie’s doctor? She’s super hot. She’s very confident. I feel like this character isn’t going to go away, so where is she going? A hookup for Mark while Lexie is out of the picture, perhaps? 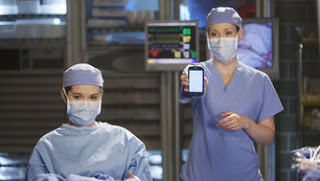 Meanwhile, Bailey and the Chief were disagreeing on using social media in the OR. I have to say, I really liked this storyline. It felt fresh and different, and somehow realistic. Plus it’s not like Bailey herself was typing out the Tweets while operating. I loved how the Chief ended up getting totally sucked into Twitter as well. Of course, I couldn’t help but think that pretty much anyone could be on Twitter posing as a doctor and dispensing advice, but I’m going to pretend like that’s not a possibility. Plus I loved the opportunity for Chief to get “Bailey’s Tweets” and “Bailey’s teets” confused.

With all this talk of babies and Twitter, one could forget that a race for Chief Resident is on! Luckily, not everyone has forgotten. Cristina and Avery battled for a spot in a quadruple bypass surgery and tried to impress Teddy with their stellar bedside manners, and Meredith stewed over the fact that Derek was using Alex in his Alzheimer’s study instead of her.

I loved both of these storylines. Cristina using her recent breakdown as a competitive tool was brilliant and classic Cristina Yang, and was also a more lighthearted way to not ignore the fact that Cristina had recently suffered from PTSD. Meredith and Alex’s storyline was more serious. The Alzheimer’s clinical trial was heartbreaking. Knowing that patients are being given placebos, but talking to them as though they might get better? Yeah, I wouldn’t want to do that either. Alex wanted to be on the clinical trial because of the edge it would give him in the competition for Chief Resident, but he hated the work. He rightly knew that Meredith should be working with Derek because she knew how to interact with people who have Alzheimer’s, and I was happy when he finally said that to Derek. Well, he said “Your wife is the only person twisted enough to handle this crap,” but same diff.

Who do you think the Chief Resident will be? I have a feeling it won’t be Avery, and right now I’m kind of leaning toward Alex. He’d be an unexpected choice, but he’s also become a really good doctor. What did you think of the episode? Are you feeling better about a Baby Sloan being on the way?