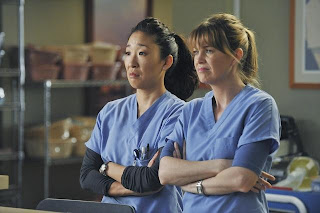 This episode was one of the funniest Grey’s installments in a long time, and I loved every minute of it. From Cristina pouting that she only had a husband that loves her while Meredith has that AND two killer clinic trials, to Callie declaring that while Mark and Arizona do get votes on what’s best for their unborn child, Callie gets her own as well as one for the baby and one super special vagina vote, I was laughing the whole way through the episode.

Callie trying to kick caffeine on behalf of the baby was hilarious. (And kind of unnecessary, no? I was totally on Callie’s side with that.) The person who probably suffered the most was poor April, who was on the receiving end of Callie’s cranky withdrawal symptoms all day. Bless her heart for asking “Like, with an accent?” when Callie snapped at her to speak differently. Oh how I’ve come to love April and her chipper, high-pitched innocence.

Callie needed that coffee, though, so she could snap a couple hips back into place. Yep, some genius had launched himself right into a brick wall so his buddy could put it on YouTube and dislocated his hips in the process. Callie used the case as a metaphor for why people should be able to do whatever they want with their bodies, like say drink coffee while pregnant, but Owen was not super impressed. He delivered a slightly self-righteous but much needed speech on how soldiers injure themselves to save others while idiot frat boys do it to make the Internets laugh. 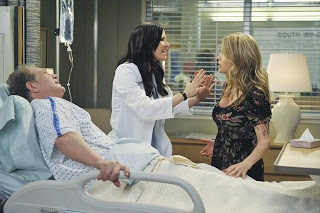 Crazy wasn’t limited to the patients this week, though. Lexie was going mad after her dad was admitted into the hospital with severe pain…and a hot young thing girlfriend. Surprise! Daddy’s rejecting the liver he needed because he’s an alcoholic, and you have a new mommy! And she’s your age! Doesn’t that sound capital-F Fun?

I’ve never really liked Thatcher much, but I do like Meredith’s icewater-running-through-veins approach to dealing with him. Really, Lexie could learn a thing or two from her. Instead, Lexie reacted to meeting her dad’s tattooed twenty-something blond girlfriend like a teenager. She essentially had a tantrum. Meanwhile Sloan was desperate to know what was bothering Lexie, because it couldn’t possibly be the fact that he recently told her Callie’s having his baby and for the second time in a row ruined their relationship by trying to force her into the stepmother role. No, that certainly couldn’t be it.

He bribed Avery with potential surgeries into getting Lexie to confide in him to he could report back to Sloan, but Avery caved. Once he realized Sloan was the real reason Lexie was upset, he lied and told Sloan the painfully predictable trick of giving Lexie chocolate had gotten him nowhere. Luckily, Sloan still let him scrub in on a pro bono case…which really, is a hell of a lot better than shaving down someone’s nose.

I think I’ve said this before, but I love how everyone on this show actually recognizes that Avery is incredibly good looking. TV is so often a fantasy land where everyone is shiny and pretty, so it’s nice to see it occasionally acknowledged. And I loved Avery’s discomfort when Sloan noted that he had just the face for a career in plastics.

Meredith was the one really faced with Sophie’s choice this week, as she had to choose between continuing with Derek’s Alzheimer’s research or working with the Chief on some groundbreaking diabetes research based on her mother’s notes. I wasn’t really sure what she’d do, but in the end she chose to cure her mother’s disease rather than continue on her legacy. It was probably the right choice. After all, as she’d pointed out, she gave her mom’s journals to the Chief for a reason. 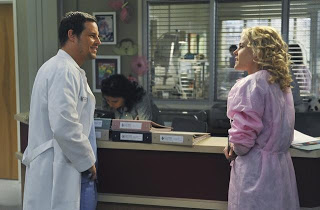 Thank goodness, that hot OBGYN is not around to break up Sloan, Callie and Arizona’s weird little family. She’s a love interest for Karev! They had a big disagreement, they exchanged a few meaningful glances, she saw the softie inside the jackass, and she turned him down for a drink. This is the typical beginning of an Alex Karev relationship.

Only Karev could be a big enough jerk to storm into the NICU, ask about a “turnip in the cabbage patch” (a baby born brain dead that could donate a heart to a fetus in need) and then obnoxiously hit on a doctor he assumed was a nurse because she’s hot and blond. Did he learn nothing from his wife? You can be hot AND smart.

But, only Karev could get kicked off the case and still watch the whole surgery from the gallery, with unrivaled passion. Arizona later promised the hot OBGYN (OK, her name is Lucy) that she would teach Karev not to be an ass, but she didn’t have to teach him how to care. She should have told Lucy the story about how Alex saved a baby’s life by holding it to his bare chest for days. Or how he saved a baby’s life with a ping pong ball. Then she would have gone home with him that night.

What did you think of “P.Y.T. (Pretty Young Thing)”? Did you sit up and take notice when Avery had his shirt off? Are you ready for Lexie to get over Sloan with that him? Should Callie be able to drink one cup of coffee a day? Did you dig all the Grey’s humor this week? Sound off below!