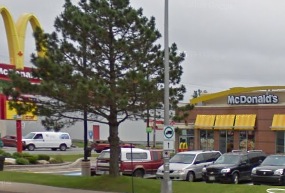 Police are looking for a group of males who caused a disturbance at a Dartmouth McDonald’s yesterday.
From HRPD:

View Larger Map
At 0201 hours, police were called to the McDonald’s, 144 Main St in relation to a disturbance.    Upon arrival officers learned that a group of white males, 18-21 entered the restaurant and started to cause problems.   The 24 year old security guard asked them to leave at which time, at least one member of this group punched and kicked the security guard, eventually taking his baton and assaulting him with it.   He sustained minor injuries that did not require medical treatment.  Two windows were damaged as a result of the altercation after which the suspects fled in a white Nissan 240 with a temporary permit.   The main suspect is described as a white male, 18-21, 5′ 9", 175 lbs, dirty blond hair, wearing a orange and brown coat.