[I recently had the pleasure of meeting this next guest at the Halifax Chicks tweetup recently. She was kind enough to write this lovely post and convince her mom to share a fabulous recipe that I can’t wait to try out! Did I mention I have a weakness for food?]

One of the first questions people ask when they discover my Greek heritage is “how is Bessy a Greek name? What is it short for?” It started when my parents were enrolling me in primary and the school board said “Vasiliki may be a hard name for our students to pronounce. You should think about giving your daughter a more Canadian name.” Not Vicky, Victoria or Vanessa (common anglicized names for Vasiliki), but Bessy. 34 years later and I still won’t let them live it down. Don’t even get me started on my middle name. But I digress. 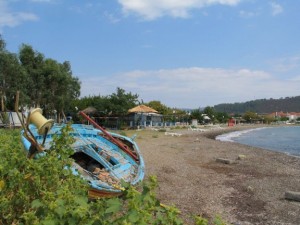 Looking down the beach

I look back at my childhood, and remember kicking and screaming when my parents told us, once again, that we would not be going to Disneyland for summer vacation, but Kato Vasiliki – the seaside village in Greece where my parents emigrated from in the late 60s. I know I know, in hindsight I realize how young and foolish I was. I later realized this was just one of the many perks of growing up Greek in Nova Scotia.

It wasn’t until my early teen years that I recognized how lucky I was to be a part of a culture filled with a rich history, delicious food, gorgeous music and a language that helped me throughout my academic years (it took me all of 2 seconds to understand what arachnophobia meant in grade 4).

As I started to learn more about the hardships my parents endured growing up in a small village, the limitations they faced and their dream of creating a better life for their children in Canada, I gained a whole new respect for their incredible trek to a foreign land. Luckily, they landed in the port of Halifax, where there was a burgeoning Greek community. It was a community that worked hard to maintain its culture, and to share it with their fellow Haligonians. It was in 1985 that the Greek community held its first Greek Summer Festival – now in its 24th year, and growing.

Greek Fest for me was an opportunity to showcase my heritage to my friends – what our food tasted like, what our music sounded like, what Greek dancing looked like. I found a whole new pride in my culture that I didn’t even know existed when it was showcased on such a grand scale. This annual festival has since grown into one of the largest cultural festivals in Atlantic Canada, organized and executed by a community of dedicated community members who turn the festival into one big house party. That is – come eat, drink and be merry – a common sentiment rampant amongst all the Greek diasporas. 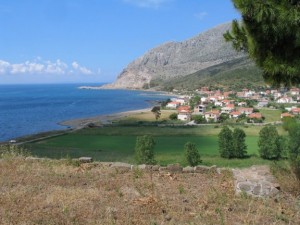 By far, one of the best things about growing up in a Greek household was the food (that could explain my not-so-svelteness). On that note, my mother has reluctantly OK’d me to share this recipe with all of you…That said, I wouldn’t put it past her to have left out a key ingredient J

Cloves (optional – but nice to have!) 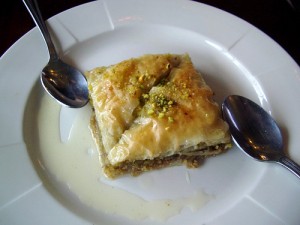 2. Toss together cinnamon and nuts. Unroll phyllo and cut whole stack in half to fit the dish. Cover phyllo with a damp cloth while assembling the baklava, to keep it from drying out (this is very important!)

3. Place 3-4 sheets of phyllo in the bottom of the prepared dish. Brush generously with butter. Sprinkle 2 to 3 tablespoons of the nut mixture on top. More if you want it nuttier. Repeat layers until all ingredients are used, ending with about 6 sheets of phyllo. Using a sharp knife, cut baklava (all the way through to the bottom of the dish) into four long rows, then (nine times) diagonally to make 36 diamond shapes. Stick a clove into the top of each piece of baklava (this is optional).

4. Bake in preheated oven 50 minutes, until golden and crisp.

5. While baklava is baking, combine sugar and water in a small saucepan over medium heat and bring to a boil. Stir in honey, vanilla and lemon zest, reduce heat and simmer 20 minutes.

6. Remove the baklava from the oven and immediately spoon the syrup over it. Let cool completely before serving.

Bessy is a pop culture fanatic and digital media strategist. After a 10 year layover in Toronto, she’s now back in the ‘fax.