I’m sure you all know I’m a fan of survivalism. It is the subject of every third post I write! This time, however, my blog isn’t about the skills, but the teachers. With two new titles as inspiration, I’d like to introduce you to three personalities big into woodsman-ship. All three are authors and hosts of wilderness-based television shows. 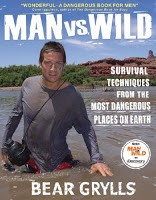 Bear Grylls is amazing, and yet not really. If you’ve watched his show Man Vs. Wild, you know he likes to talk a big talk and run when he should walk. He films with the comfort of a team, a sensible precaution for a professional adventurer who loves to get into danger. On the other hand, he made it into the Guinness Book of Records for being (formerly) the youngest person to ascend Mount Everest. This he did a year and a half after nearly breaking his spine in a parachuting accident.

He has two interesting titles in our collection. The first is Man vs. Wild : survival techniques from the most dangerous places on Earth, published in 2008. Unlike most guides that teach basics, this book discusses those same skills as they apply to various terrain. The first chapter covers food, shelter, travel and such, while the remaining five teach you how to survive in the mountains, sub-zero climates, jungles, deserts and the sea.

His newest is Living Wild : the ultimate guide to scouting and fieldcraft, published in 2010. The ten chapters cover that expected topics: gear and tools, camp craft, fire craft, cookery, sanitation, navigation, nature reading, first aid, and personal preparation. These are organized such that necessary skills are found together. One does not need to mark both shelter-building and knot-tying to find the right hitch for the right lean-to. Throughout, he offers tidbits of wisdom that come from his broad life experience, some teach preparation, some prevent silly mistakes, and some suggest alternative and opportunities. A quick read overall.

Les Stroud is a Canadian author, television producer, star of his own shows (Survivorman was filmed without a camera crew!), musician and family man. Stroud doesn’t run into adventure like Grylls, but does the research, then slowly descends into danger. That sensibility is evident in both of the following titles. Survive! : essential skills and tactics to get you out of anywhere– alive was published in 2008. I’ve already blogged about this title so I won’t dwell. This title’s benefit is in the presentation; while he demonstrates practical skills, he suggests opportunities one may have over looked in the stress of the situation.

That sort of forethought / hindsight is very much in Stroud’s style, and is clearly evident in his newest, Will to Live : dispatches from the edge of survival. Published in 2010 and scribed during the filming of Beyond Survival (not yet released in Canada, I’m afraid), this book combines his experiences with descriptions of his favourite survival stories. One chapter is dedicated to the Chilean soccer players who were reduced to cannibalism when their plane crashed, another was for Yossi Ghinsberg who survived alone and lost in Amazon for 19 days. These he interfiled with his visit to the homicidal Amazon Waorani tribe, his participation in the first annual National Adventure Racing Championship of Canada, and an ill-timed canoe trip alone in the Algonquin National Park…during moose mating season. This book is written in Stroud’s enthusiastic and melodramatic voice; you can practically his voice-over as you read.

Cody Lundin is a naturalist and a hippy. He runs the ‘Aboriginal Living Skills School’, co-hosts the television program Dual Survival (into its second season, with the first soon to be released in Canada), and has authored two excellent guides for emergency survival. His first, 98.6 Degress: the art of keeping your ass alive!, was published in 2003. With a down-to-earth writing style and Russ Miller’s 60’s cartooning, Lundin’s book is full of professional knowledge , home-grown skills and entertainment value. Even before he tackles the essentials, he muses on the nature of survival situations; how survival skills differ primitive skills, how to overcome fear, and how to develop a survivor mindset.

In his 2007 title, When all Hell Breaks Loose, Lundin takes his easy-going pragmatism from the wilderness to the urban disaster. Once again he offers solid advice on physical and mental preparation. He discusses the effects of losing society cold turkey. And then he delves into some even darker aspects. Health considerations, both short term and long. Proper sanitation, from latrines to body disposal (the first time I have ever seen such content, and he gives it 9 pages!). He even provides, in the obligatory cookery section, safe recipes for rat.

Between adventurous Grylls, academic Stroud, and pragmatic Lundin, you have the beginnings of an excellent survival school!