This is where I’m supposed to share fabulous and outrageous design and decor from my visit to The Strip. Well, if you’ll indulge me a just a little…it’s a blog of a different sort.

I got on the plane and starting feeling bad somewhere between Toronto and Las Vegas. Really bad. Then, really, really bad. If I could have gotten off the plane, I would have. Thumbs up and special thanks to the lovely flight attendant who let me sit in the jump seat near the bathroom for most of the flight, handed me a refreshed & cold facecloth and small doses of ginger ale. 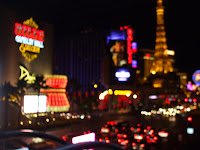 By the time I landed in Las Vegas, I was somewhat delirious with fever, was probably swaying on my feet and was soaked with the cold sweats. Thumbs down to the hotel shuttle driver who wouldn’t take me to my hotel because “it was too close to the MGM and it’s fight night. Too busy”. Thankfully, the cabbie next your shuttle service was more than happy to take me…and the giant tip.
So, rouge readers, that’s the beginning of the sad tale that was my trip to Las Vegas. Sparing you all the gory details, I will say that I had a raging fever for 4+ days, every part of my body ached, I had/ have a terrible cough, and was barely able to leave the hotel room. It was a pig.
When I did muster up the strength, it was disastrous…think throwing up in the Grand Canyon and then again on the sidewalk in front of Target when out trying to buy another pair of pjs! 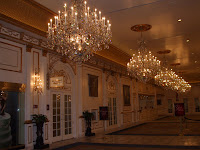 And how was dinner at TAO — the hottest place on the Strip frequented by the superstar elite? I don’t know, couldn’t join my party there on Monday night even though it tooks months to get the reservation.

How was Switch? The crazy/ famous new steakhouse that literally switches it’s decor every hour via electronice panels, ceiling…etc? I don’t know, couldn’t go there either.

Jubiee!? Sorry, showgirls, I didn’t see you and what I can only imagine were your fantastically elaborate costumes. I had a ticket, but it went to waste because I was too sick to get there on show night.
You get the point.
I suffered through it as best as I could and went to my scheduled conference sessions later in the week (the real reason I was in Las Vegas) and then straight back to bed. Overall the trip was a bust. Not at all how I hoped to spend my week, that’s for sure! 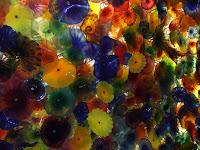 The pics you see here are random shots that I was able take in my limited time out of the hotel room. Check out the beautiful chandeliers in the Paris Hotel lobby – they were massive and there were LOTS of them, the ceiling at the Bellagio Hotel – all hand blown glass. Incredible. And the standard “Strip at Night” photo.

Sorry to disappoint my readers this week. Trust me, I’m disappointed too.