It’s officially Halifax Burger Week 2015! This year is the third year running for The Coast’s popular event – it’s a week where people come out to support local businesses while shamelessly eating their most favourite high calorie food.

There are lots $5 burgers to be found around town, which is a great way for people to try a lot of burgers and find new favourites. There are also more expensive burgers that have a few bucks going to FEED Nova Scotia, so there is also that warm ‘n’ fuzzy charity element to the event.

Burger Week kicked off on a beautiful sunny day, and the sidewalk warriors were out – scaling snowbanks, circumnavigating puddles and dodging dangling icicles.

I met up with this year’s Burger Ambassadors, Josh and Vicki, at the early hour of 11:30am to pass the torch and kick things off. As some of you may remember, I had the privilege of being Burger Ambassador last year – but quite honestly, I am glad the pressure is off. I’m looking forward to enjoying fewer burgers this year, but thoroughly enjoying them. Last year I sampled 21 burgers – eating 16 burgers in total.

Read about my Burger Week 2014 Adventures!

I’m on the edge of my seat to see if this year’s ambassadors can top me!

The first burger of Burger Week was the Classic at Ace @ Bearly’s – the perfect hamburger, with crunchy dill pickles, frizzled onions and beefy goodness. 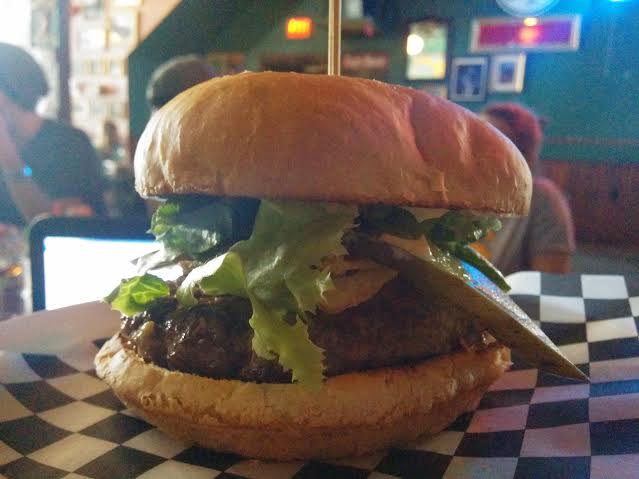 I interviewed Josh and Victoria about their burger week plans:

Eat-This-Town: So how did you guys get to be Burger Ambassadors?

Josh: The whole “burger selfie” thing, a contest put on by the Coast.

Vicki:  I think they were kind of looking for people who did more than a burger selfie. I think the more retweets and favourites you got helped. Like, I made a video of me doing the Flip Burger challenge and got my friends to share it and it got 6000 views.

Eat-This-Town: What is the Flip Burger Challenge exactly?

Vicki: It’s a giant burger. It has 4 patties and they stuff it with fries. And they give you a side of fries that you have to eat with it. You have to eat the whole thing in like 20 minutes.

Eat-This-Town: Did you do it?!

Vicki: I gave up 15 minutes in, with one patty left. What made it so hard was that there were like 2 pounds of jalapenos on it! But there were some guys there at the time who were like, “Wow, that’s more than I could eat.” It was funny – when I saw my selfie on the news, I could hear somebody gagging in the background of the newsroom. 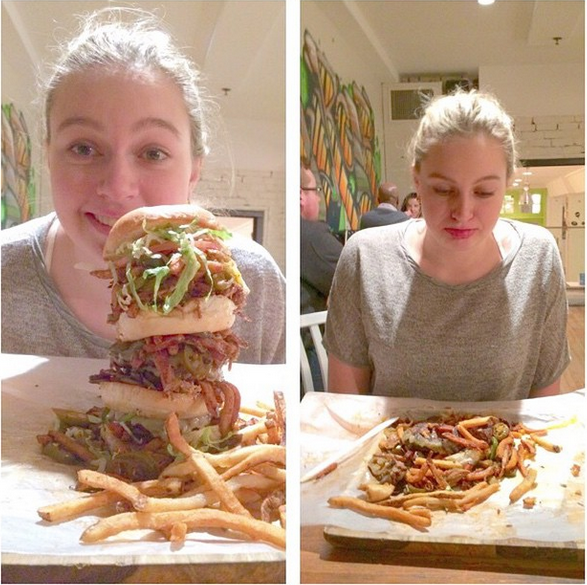 Eat-This-Town: Josh, you run the blog Life of Burgers. Do you think that helped you win?

Josh: Yeah that put me on the map, sure. But I posted my burger selfie and got my friends involved and they kind of ran with it. Everyone was kind of like, “everyone’s looking at you – your blog is called Life of Burgers”.

Eat-This-Town: You’ve been writing the blog for almost a year now! What’s your favourite burger so far that you’ve tried?

Josh: 2 Doors Down is definitely up there, and the Durty Nelly’s burger… that was before they changed the menu, though. I think they still have some variation of it, but I don’t think it’s the exact same.

Eat-This-Town: Why do you guys think this is such a popular event?

Josh: I think burgers have become more and more popular. Restaurants have obviously had burgers forever, but gourmet burgers are now more popular and people are willing to spend a little more money on a gourmet burger.

Vicki: Since they don’t just have the expensive burgers but also the $5 burgers, it’s good for students and Halifax is a big university city. 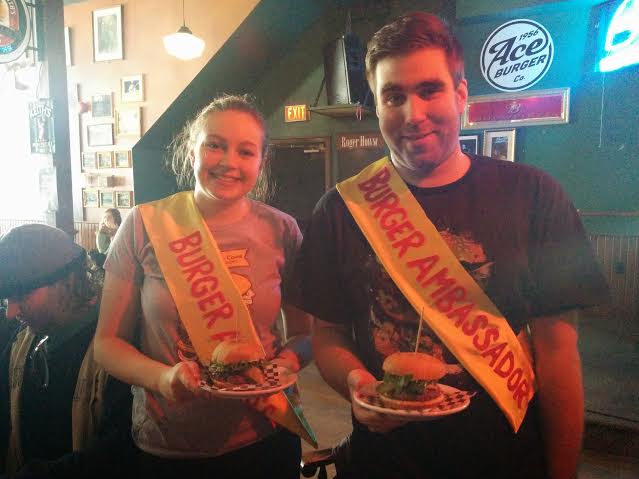 Burger Ambassadors: Victoria & Josh with The Classic from Ace @ Bearly’s

Eat-This-Town: Have you guys eaten at Ace Burger before?

Josh: I’ve only ever eaten at Ace @ Bearly’s.

Eat-This-Town: How was burger week last year for you guys? Did you participate?

Josh: I actually did nothing. That’s actually why I started the blog. I was a poor student at the time – I was graduating that May and had no money. So I wanted to start the burger blog and get into burgers.

Eat-This-Town: What burgers are you most looking forward to eating this year?

Josh: 2 Doors Down. Their regular burger kills it so I’m expecting big things from there.

Vicki: I hear good things about 2 Doors Down. This event is actually great ‘cus I get to go places I normally don’t go to.

Josh: Yeah, half the places I’ve never been to.

Josh: I’m not a huge veggie burger guy, but the vegan Big Mac at EnVie sounds really cool – I dunno, maybe because I like Big Macs. There isn’t really much for vegetarians for Burger Week…

Josh: But at Relish you can substitute for a veggie patty.

Eat-This-Town: Until it gets to be 2 pounds of jalapenos!

Eat-This-Town:  So what is your plan of action?

Josh: I made up a schedule for each day. And then I got these guys {his burger team} to sign up for certain days. I’d say there’s between 8-10 of us.  The schedule for today has already changed, of course. {Due to the snow}

Vickie: I don’t really have one, I’m just going with the flow. Just asking different people if they wanna eat. Whoever wants to come with me can come. I’m not thinking too much about it.

(Josh isn’t joking by the way! His team gave me a copy of their Burger Week schedule!) 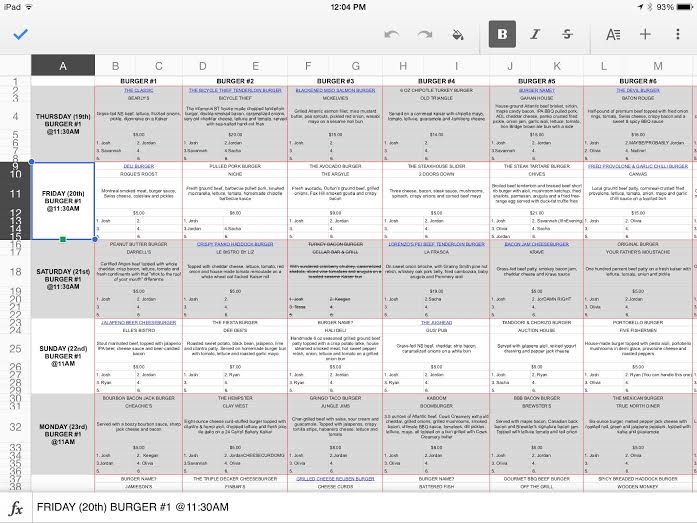 Eat-This-Town: What are your plans for the day?

Vicki: I texted one of my friends so maybe we’ll get together and go to a few places. But I have an interview later with someone from The Coast.

Josh: I have the same interview, and News 97.5 is calling me this afternoon. With the snow and the interviews and everything today it’s kind of hectic but we’ll get through it. After this I think we’re going to the Bicycle Thief, and it was supposed to be McKelvie’s next but they’re closed. And then the Gahan House, Old Triangle, Baton Rouge, Tempo, Harbour City. That’s 8 burgers today!

Eat-This-Town: So you actually have a schedule to make it to every single place?

Josh: That’s the plan, but we’ll see if I’m still walking in a few days! 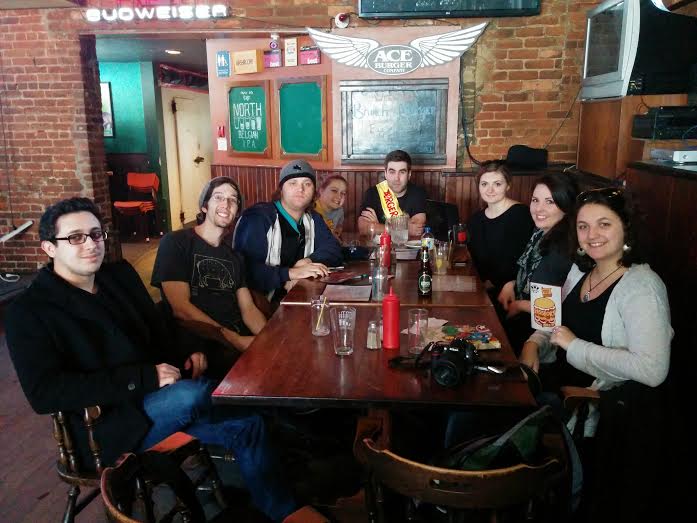 You should also check out Josh’s blog: Life of Burgers

Josh and Victoria will be on Global’s morning show on the last day of Burger Week – March 26th!

Get your Burger Week t-shirts at Fresh Prints!