Burger Week is now over halfway done, and it doesn’t seem like Halifax is slowing their consumption down anytime soon. With the end of the week in sight, I have been adding more and more burgers to my list, to the point of not knowing how I will make time, or stomach space, to try them. However, I will be pushing until the end of Day 7 to make sure I get to experience all the ones that I want to.

For now, I’m back to give you a look at 8 more burgers I have tried, and hopefully it will point you in the right direction in terms of burger choices. Trust me when I say that you’re going to want to read this one, because there is some awesome burgers this time around! 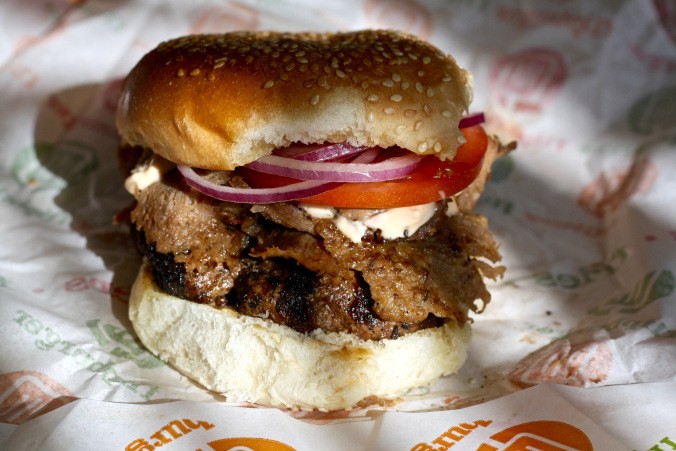 I was a bit surprised when I arrived at Flipburger and got this one, because I assumed that the donair meat was the only beef in the burger, but there is actually a patty in this one too. I’m not one to complain about having to eat more meat, especially with a patty as nice as this one! The donair meat was also really flavourful, and there was a good portion of it sitting on top of the patty. There was a lot of onions on this burger, and I ended up taking some of them off because it was really overpowering. My major complaint about this one though, is the small amount of sauce that comes on it. The chipotle mayo was delicious, but this burger really needed more sauce to even out all the meat, and to give it some layers in the taste department. However, this burger was still enjoyable, and it’s a must-try for you donair lovers out there. 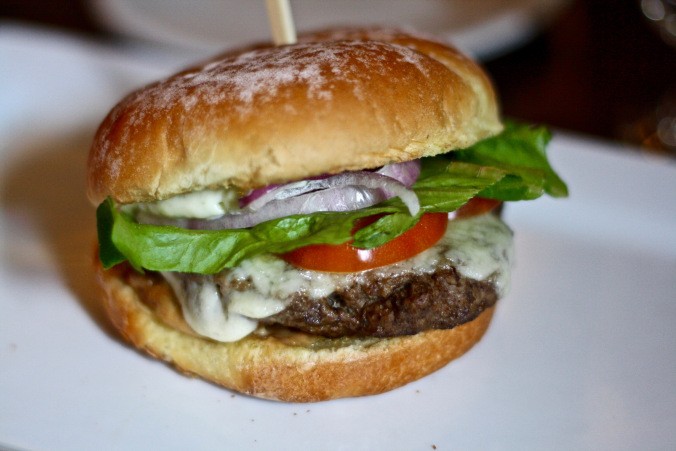 My favourite part of this burger from Five Fishermen was the bun. It was soft on the inside, and had that slightly crunchy exterior from being toasted. Aside from the bun, I wasn’t super impressed by this one. The beef was ok but could have used more seasoning. The peanut sauce was really overpowering and made it hard to taste anything else, like the cilantro mayo. If you like intense peanut flavouring, this may be the burger for you, but I wasn’t a big fan. 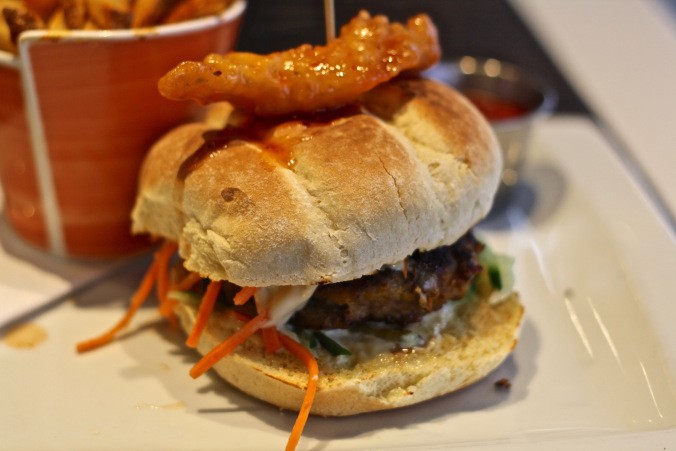 This burger was exactly what I needed to finish off the day. The pork used in the patty was really nice, and it was the curry and coconut combination that brought a great flavour to the meat. The pickled carrots had a really unique taste to them, and I loved the crunch that they gave to the burger. The sweet chili was the perfect accompaniment to everything, and it gave a touch of heat without being too much. My favourite part of the burger was the shrimp that adorned the top of the burger. I’m a big fan of tempura shrimp, and when you coat it in sauce, you really can’t go wrong! 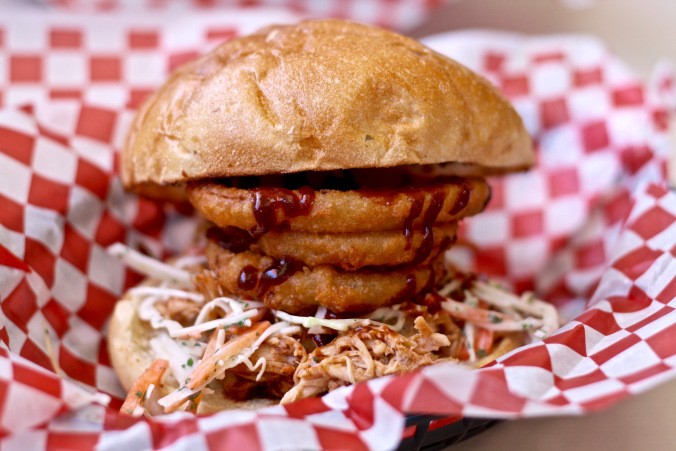 The initial decision to add this burger to my list this year was due to a picture they posted of it early on. The picture was loaded full of meat, slaw, onion rings, and BBQ sauce, and given that all those things are favourites of mine, I knew I would want to try this one. When I ordered it, I was pretty pleased with what I got, even though it didn’t necessarily have the beauty of the posed picture.

There was a stack of onions rings which I was really excited to see, and they sat on a bed of coleslaw and chicken. The coleslaw gave that great crunch that you would expect it to, and the chicken was really tender and tasted great. The bun was really soft, and I loved how it allowed me to squish everything together and get a full bite. My one complaint is with the small amount of sauce on the burger. I feel like you could ask for extra sauce and it wouldn’t be a problem, so if you like your burgers saucy, be sure to mention it! 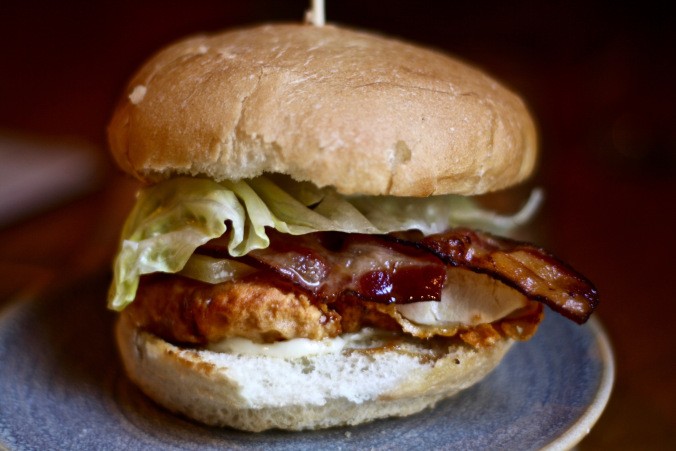 This burger has been getting a lot of talk throughout the week, and it seems like people are pretty happy with it. The sounds of fried chicken tossed in a foie gras maple syrup got me really excited, and this was one that I couldn’t wait to try. The unmelted cheese on the burger had a nice sharpness to it, and the Oulton’s bacon was delicious like always. I really liked the maple syrup coating on the chicken. It was the perfect level of sweet, and it really added an awesome flavour to the whole burger. My one major complaint with this one however, is the amount of chicken that they put on mine. There was some bites that I took that didn’t even have any chicken in them, and that was kind of a let down. For a burger with a price tag of $15, I would expect a good portion of the protein.

Don’t get me wrong, this burger had some really great things going on, and I definitely see where all the hype is coming from. I would have just liked a little bit more for the cost. 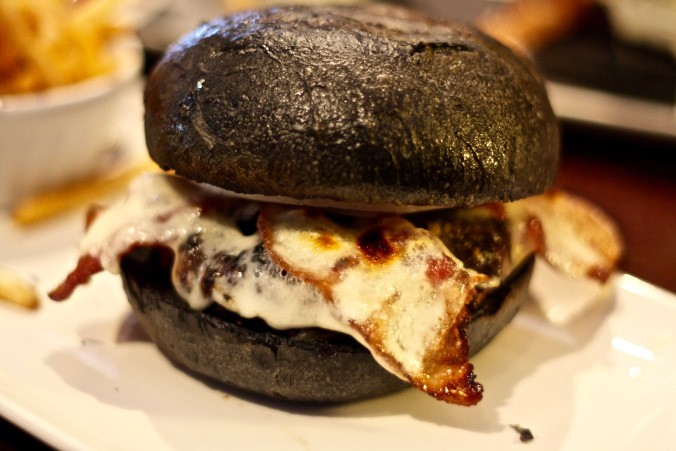 For some time now, eating a black bun has been on my “Burger Bucket List”, so when I saw that one was being offered up for Burger Week, I knew I was going to try it no matter what was on it. Thankfully, it turned out that there was actually some pretty delicious things incorporated into this one.

There was lots of perfectly cooked bacon, which was smothered in both cheddar and swiss cheese. The Cajun seasoning in the beef patty was awesome, and it was bursting with flavour. I was surprised by the black bun, mostly cause I was expecting it to have some unique taste to it, but it actually tasted like a normal bun. There was some moments where the colour did mess with my mind, but I eventually got over it in order to devour this very filling burger. Definitely give this one a shot, because cool and unique burgers is what Burger Week is all about! 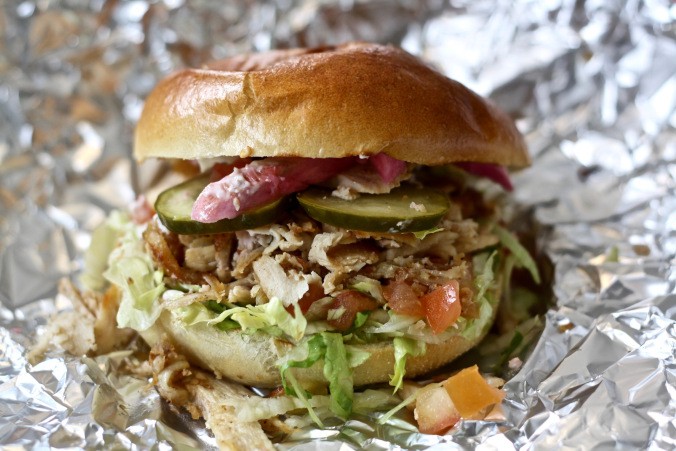 If you’ve had a chicken shawarma from Mezza before, you’ve basically already had this burger. The only difference is obviously the use of a burger bun, which in this case was a really great crusty bun that worked perfectly with the contents.

I’m a big fan of shawarmas and Mezza is no exception. The chicken is always delicious, and there was definitely a healthy portion on this burger. There is a big pile of veggies on this one (to make you feel a bit better about eating meat all week), and I love how many pickles they put on mine. My favourite part of this burger, and really any shawarma I have, is the pickled turnips. They offer that familiar pickled taste that makes shawarmas so great, and there was no shortage of them here. Put all this together with a generous amount of their signature garlic sauce, and you have a really tasty meal! 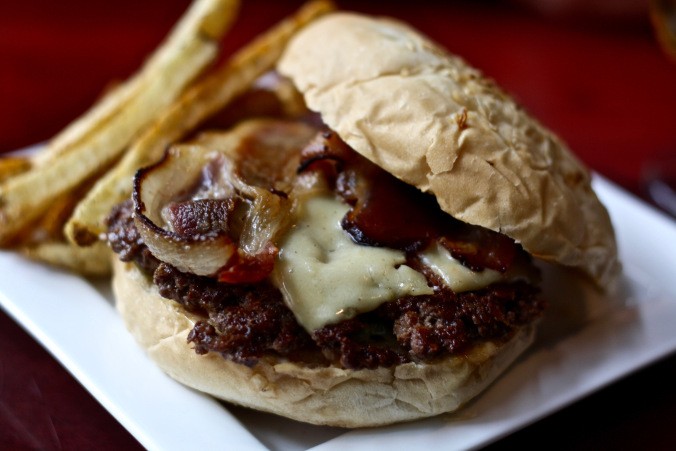 The instant that this burger was placed in front of me, I knew I was in love! The first thing I noticed was the huge strips of back bacon, which was creating a bacon aroma that I just sat and took in for a minute.

After snapping out of the bacon-induced trance, I managed to try a few bites, and the awesomeness continued. The patty was so juicy that it was dripping, and Getaway Farm brought it yet again with their delicious beef. I loved the pickles on this burger, and the processed cheese was a very welcome addition. The only small thing that I would change is that I would want a little less mustard, but I’m just not a huge yellow mustard guy so that’s more of a personal preference and shouldn’t be seen as a negative aspect of this burger.

Seriously, if you haven’t tried this one yet, you have to. I can almost guarantee that you will love every minute spent eating this burger!

I’d love to hear from you about anything Halifax Burger Week! Follow me on Twitter and/or Instagram (@lifeofburgers) and tag me in any pictures, thoughts, or comments you have about the week!