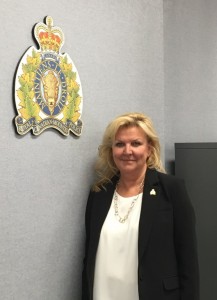 Halifax District RCMP is under new leadership with the arrival of Chief Superintendent Lee Bergerman to the position of Officer-in-Charge.

A 30-year member of the RCMP, C/Supt. Bergerman brings a diverse operational background to the role based on her experience across Canada in a variety of integrated policing environments.

“I am very excited to be in Halifax taking on this new and exciting role,” says C/Supt. Bergerman. “From the few weeks I’ve been here, I have observed great people, vibrant communities and excellent police work happening throughout the District. I look forward to being a part of the Halifax District team and working alongside our Partners in Policing.”

C/Supt. Bergerman was born and raised in Richmond, B.C. and is one of eight siblings.  Of those siblings, five have served with the RCMP so there was little question that C/Supt Bergerman would join the Force in 1987. After Depot her first post was in Thompson, Manitoba.  From there she went on to serve in British Columbia, Alberta, and Ontario in a variety of areas including Undercover Operations, the Intelligence and Serious Crime Unit, Unsolved Homicides Unit, Biker Enforcement Unit, Combined Forces Special Enforcement Unit and Federal Serious & Organized Crime.

“On behalf of all RCMP employees in Nova Scotia, I’d like to welcome C/Supt. Bergerman,” says A/Commr. Brian Brennan, Commanding Officer of the Nova Scotia RCMP. “I believe her experience, energy and drive will greatly benefit the RCMP and the communities we serve.”

Halifax District RCMP would like to introduce you to C/Supt. Bergerman
https://haligonia.ca/halifax-district-rcmp-would-like-to-introduce-you-to-csupt-bergerman-146283/