Man, oh man- I love food festivals! Err…cultural festivals, I meant cultural festivals. This past weekend, the Greek community of Halifax hosted Halifax Greek Fest 2009 at St. George’s Greek Orthodox Church on Purcell’s Cove Rd. My friend and I stopped in en-route to the cottage to fill up our bellies and take in some sights. Those sights mostly ended up being enormous plates of food, but whatev!

After much discussion and evaluating our level of hunger, we decided to be pretty ambitious and got two platters to split- Vegetarian, and Lamb. Not that either one of us is a vegetarian, but the veg plate did have a nice selection of goodness so we thought we’d merge the two. 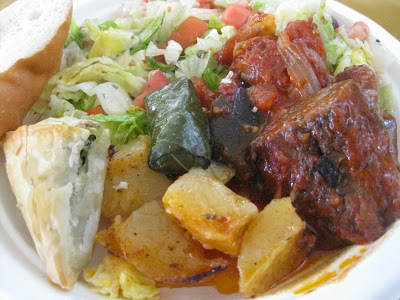 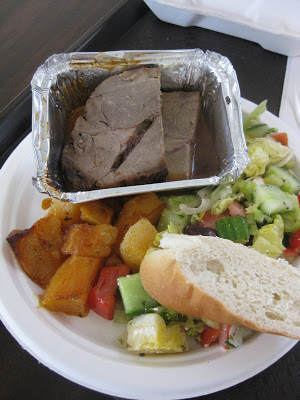 Dessert was a much harder decision. There were lovely Greek mamas filling up trays and trays of sweets: Diples, a deep fried crispy pastry; Galaktoboureko, a custard-filled phyllo pastry; Kataïfi, almond & walnut pastry in syrup and Kourambiedes, almond shortcakes in powdered sugar to name a few. In the end, we decided to go pretty main-stream with a couple pieces of Baklava, a dessert made of paper-thin layers of pastry, chopped nuts, and honey. This stuff was euphoric- flaky pastry with warm notes of cinnamon, cardamon and cloves, mixed with walnuts and drizzled in sweet honey. 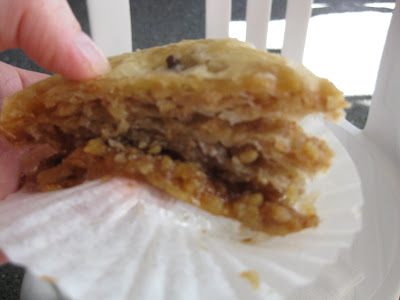 We moved out of the food area for dessert, got two strong Turkish coffees, and scored a couple spots in the entertainment area where a group named Poseidon were just finishing up their last couple songs. 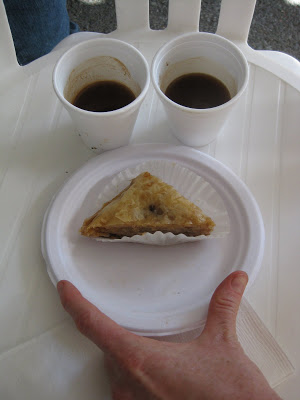 And then, finally, it was time for the best part- coffee and dessert! The Turkish word for breakfast, kahvalti literally means “before coffee”. Turkish coffee is made from freshly roasted beans pounded in a mortar, just before brewing. The powdered coffee is boiled in a pot or cezve – I had mine with a little sugar- and served it into a cup, where the dregs settle – watch out for that!

After our bellies settled, and we took in a little more music and dancing, we rolled ourselves out to the sunshine and proceeded on our way to the valley. The crowd was getting heavier on our way out with curious people young and old looking to learn something new, try some great food, and maybe have a dance or two.

I ran into a Greek friend of mine on the way out, one of the organizers behind the event, who said that this was the best year yet. I have no doubt, and I’m sure next year’s festival will top it yet again.