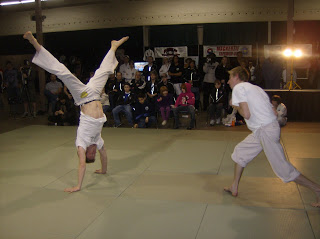 While battling elements like the beautiful weather over the weekend, The 1st Halifax Martial Arts Expo went off as a success. Over hundreds of attended packed the Halifax Multi Purpose Center over the two day festivities. While there may had been some small rough patches, the final product went well and spoke for itself.

“It was really scarey coming in. No one had done this before and it had been doubtful by a lot of people because of the time of year,” says promoter Ryan Staples.

“I am looking at this as a success right now from the fact that we build something that is going to last. Everyone has come in and seen what it is all about and you got to be here and understand what is going on with the demonstrations. That is the biggest selling point of this. I think its a success over that it happened, it went through and the word is spreading. I think it is only going to grow from here.”

Over the weekend, people seen about a dozen schools ranging in over 20 styles of martial arts that saw the basics like Brazilian Jiu Jistu and Maui Thai Kickboxing to styles that are not usually seen in the public eye like Kenpo Karate and Capoeira. Besides martial arts there were also mma clothing stores, supplement companies, fitness gyms and video game centers. Demonstrations did rule the center stage with different schools showcasing there talents. Even one school did a black belt ceremony for one of its students at the end of Saturday’s show. While the academies enjoyed themselves over the weekend, they seem most happy about spreading the word.

“It’s not so much generating interest then it is promoting the martial arts,” says Ray McKinnon, Owner of Bushido Kai Martial Arts.

“We have people come up to our table but its also other martial artist who have come by to visit. The idea was the public would come in and sign up for martial arts lessons and some have. This is only the first one. I’d say by the second expo when they have it. We’ll get out more and it will grow bigger and bigger.”

While a number of school were at the event, there will still some schools from the Halifax area that could not make it to the event due to scheduling conflicts. More academies will be there when Rampage Promotions puts on the next event, which they are planning at this time to do so in September. While the weekend went off without a hitch, organizers still want to try and make it bugger and better next time around.

“You know what, I have kind of gone around and gotten more supports from the people who are here saying were with you on this for building it and will most likely be here next time,” says Ryan Staples.

“ A couple of other clubs that didn’t get a chance to make it, time of year was an issue. They saw what it is and said you know what, this is awesome, You set up is great and we see what your doing and count me in next time. I know its going to grow bigger that way. We will expand a bit more into other businesses like mma gear, more supplement and fitness companies.”

If you want to find out more information or to keep up to date when the expo will officially take place, you can join there facebook group by typing in The Martial Arts Expo.