As a resident of Halifax, how far would you imagine you’d need to go to see tigers, leopards, or a polar bear? Once upon a time, a Halifax zoo called Downs’ Zoological Gardens hosted these animals and many more.

Downs’ Zoological Gardens was in operation between 1847 and 1867 and then again between 1869 and 1872. The zoo was owned and operated by a man named Andrew Downs. Originally, the zoo covered two hectares of hilly land near where Joseph Howe Drive is today (near where the Superstore is now). By the early 1860s, the zoo covered 40 hectares (almost half a square kilometre). There were walking paths throughout the zoo that led to picnic areas, statues, an artificial lake, and most notably, the Glass House. 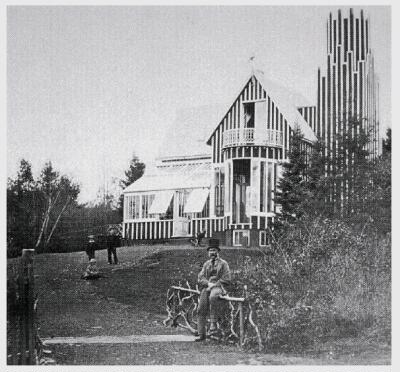 The zoo’s owner/operator, Andrew Downs, sits on the railing in front of the Glass House (photo credit: Coaster Enthusiasts of Canada)

The Glass House contained a greenhouse and aquarium as well as a museum of stuffed animals. It was a very popular site amongst all of the attractions at the zoo.

The Downs’ Zoological Gardens was so popular that that there were two ferries operating on the Northwest Arm that would ship guests to see the zoo. The ferries were called the Neptune and the Micmac.

The zoo had become so popular by the 1860s that representatives from the American Smithsonian Museum had recommended Andrew Downs set up a condensed version of his zoo at New York’s Central Park.

The zoo temporarily shut down while Downs moved to New York, and although it was reopened in 1869, it closed in 1872 due to financial hardship.

Thanks to Mike Macdonald, fan of Halifacts, for suggesting that we look into this piece of Halifax history. Feel free to send along your suggestions too!