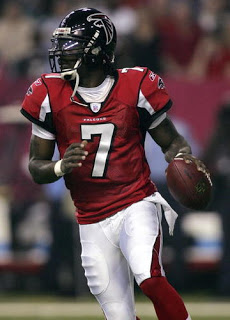 Haligonia Sports Postponed Until August 21.
Haligonia Sports will be back on August 21 featuring Mark Mclaughlin, star basketball player for the Saint Mary’s Huskies and SMU Director of Athletics, Steve Sarty. Apologies for the delay, please tune in next week at noon!
In the meantime….
Mike Vick is back. The former Atlanta Falcon/felon signed a contract with the Philadelphia Eagles. Vick will miss the first 4 games dues to a suspension handed down by NFL commissioner Roger Goodell.
Of all the teams in the NFL that we thought Vick might sign with, Chicago, Green Bay, Miami, New England, Minnesota, the Eagles were certainly a surprise, but it makes a lot of sense upon evaluation.
Vick gives a talented Eagles team another extremely talented weapon, and the Eagles give Vick a chance to work his way back into the NFL without bearing too much responsibility for the franchise’s fortune.
Face it, if the Eagles don’t win the Super Bowl this year, and they will be a serious contender, it
won’t be Vick’s fault. The Eagles will use him in a wildcat offence (which they deny, but they will), bring him in on short yardage situations, put him on special teams, have him line up at wide receiver, and give him 10-15 carries a game.
That’s way too much tongue in cheek analysis, but seriously, you could line up Mike Vick at a baker’s dozen of different positions and he’d be successful. Imagine that dude as a safety!
Essentially it makes a team that came one win away from a Super Bowl appearance much better. It doesn’t hurt that Vick and Donovan Mcnabb are good friends, and his head coach will be Andy Reid, a man who believes in giving people second chances, after dealing with his son’s drug peddling charges from a couple years ago.
On the surface it certainly appears to be a win-win situation for all involved. In his defence, Vick has paid his debt to society. I was hoping for a longer suspension from the NFL, maybe 8 games. But at least Goodell gave him four.
It also makes the NFC East, most interesting division in football, even more interesting. It actually makes it unfair for the other 7 divisions. How do you compete for notoriety with a division that has the New York Giants, America’s team the Dallas Cowboys, the Washington Redskins, and the Eagles now equipped with Mike Vick.
The answer; you don’t.

Speaking of the NFC East and quarterbacks, the Giants just signed Eli Manning to a 6 year extension which will make him the highest paid player in the NFL. How is it possible that Eli makes more than Peyon?…. If you aren’t following the Rick Pitino saga, you should be, it’s turning out to be a doozy even by the impossible standard set by major sports in the USA. Pitino, the head coach of Louisville basketball and a man who revolutionized the game, is mired in a legal battle with a woman who claims he had sex with her, impregnated her, gave her money for an abortion, then paid off his equipment manager to marry her. Believe me, I’m not smart enough to make this up. Check it out in CNNSI http://sportsillustrated.cnn.com/2009/basketball/ncaa/08/14/sypher.marriage.ap/index.html……