A few weeks ago, on one of those random days where we actually saw the sun, we went to the Hart & Thistle Gastropub & Brewery on the Halifax waterfront for a quick bite.  Well known for Brewmaster Greg Nash's fun, hoppy beers, the H&T also has  good pub food and was the perfect spot to stop on out way over to Dartmouth.  We saw several tables heading inside, having been beaten down by the crazy winds, so we settled at a table by the window and ordered some heartwarming comfort foods.
My friend ordered the Thistle's Bigger Burger, topped with Sweet William's sausage, spicy Havarti cheese and the standard burger fixin's.  This was a huge burger, like a: "I gotta cut this in half" kind of burger, and with flavour to rival Darrell's.  The addition of sausage added another rich  layer, and bumped it up to a 'hearty appetite' dish in my books. The fries on the side were crispy and clean,  just the way I like them, not grease-laden.
Thistle’s Bigger Burger
topped w/ Sweet William’s Italian sausage,
peppered Havarti, lettuce, tomato,
red onion & dill pickle 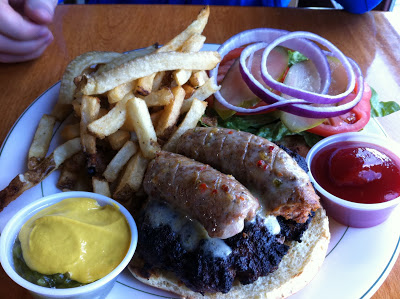 I wasn't feeling uber hungry so I opted for the Kettley's Kettle, a soup of the day.  On this occasion, the soup was described as a corn chowder with pulled pork.  Unfortunately, it wasn't really what I had in mind; being moreso a BBQ'd pork soup than a yellow corn chowder as I had envisioned, it was just a bit too sweet for my taste.

I did leave satisfied, however, as we ended up swapping plates so that my friend gobbled up the rest of my soup and I chowed down on his yummy fries…! 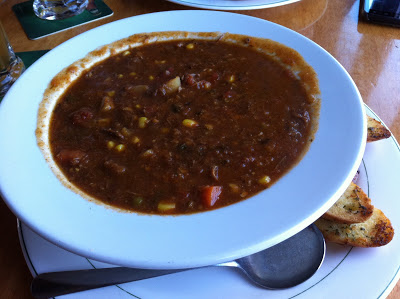