The RCMP wishes to let the public know that this person has been identified. 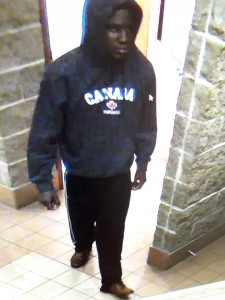 The RCMP is asking for public help​ to identify​ a person of interest.

At approximately 6 p.m. yesterday, Halifax District RCMP was asked to attend​ Cole Harbour Place on Forest Hill Pkwy. in Cole Harbour to respond to a man​ who made​ inappropriate comments.​ Staff had​ escorted the man out of the building by the time the call was made.

A preliminary investigation showed that​ the man​entered​ the building’s​ pool area and jumped into the hot tub while​ fully clothed. It was reported that the man had made inappropriate comments while in the hot tub and that staff had then escorted him out of the building.

The man is described as Black and​ approximately 5-foot-10 with a slim build. He was wearing black Adidas jogging pants with​ three white stripes down the leg, a black sweater with the word​ “CANADA” in white letters across the chest and brown dress shoes.

RCMP​ is looking to identify this man and speak to him.​