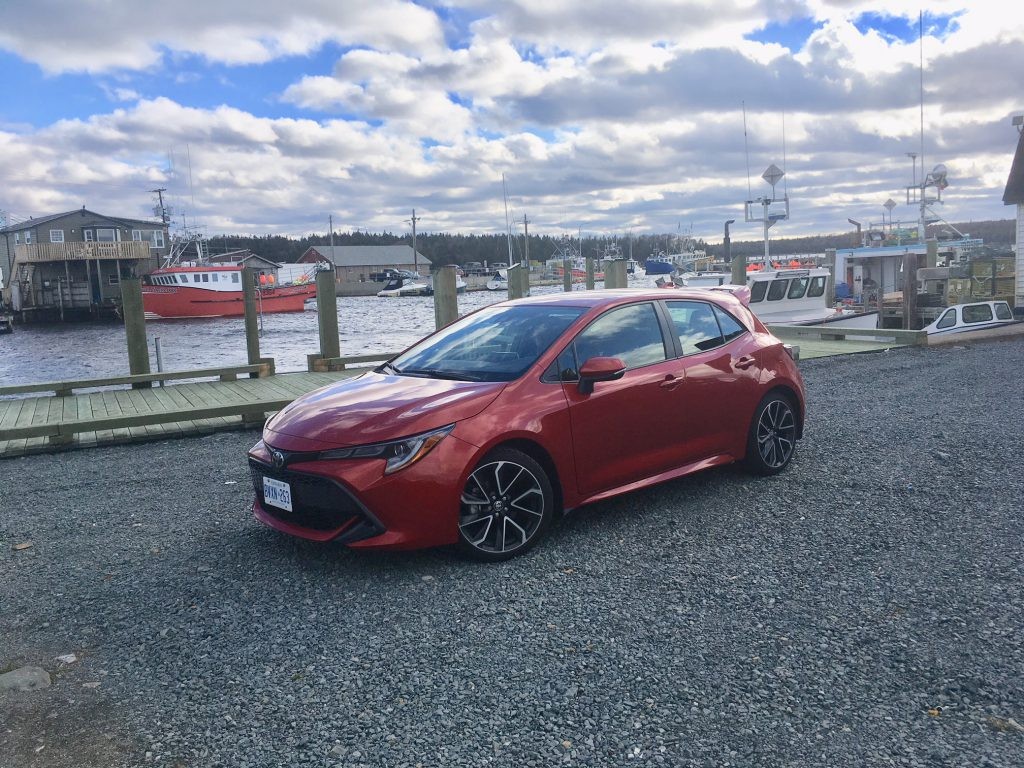 A couple of years ago, I
drove the 2017 Toyota Corolla sedan. I started the review by mentioning a
nameless friend whose favourite vehicle to drive is a Toyota Corolla. I linked that
to her complete indifference towards driving general, along with her bland
taste buds. If that sounds harsh, this is something that she will admit to this
day.

Though now when she admits it, she admits it as a moment in her
past. These days she’s much more adventurous with food. Sushi? She’s the first
one to show up at the restaurant. Thai? Bring it on, she says. It appears she
has chosen to be a bit more adventurous as she goes through her mid-30s.

She still loves the Corolla but I’m not sure that it fits
the type of person she has become anymore. Or does it?

Toyota has completely revamped their offering in the segment. Now aptly called the Corolla hatchback, Toyota promises that it has added some proverbial seasoning and spices to its trusty but uninspiring dish.

And if the exterior design has any sway at all in achieving that goal, then Toyota has hit this one out of the ball park.  Gone is the awkward cheese wedge shape pf the Corolla iM in favour of much more aggressive lines and creases. My tester featured the SE upgrade package which is absolutely a must-have if you’re considering the base model. Among visual cues it adds chrome to the bumper and rather nice-looking 18-inch wheels, which really help round out the look. My particular tester added a rear spoiler as an accessory from the dealer. This makes it look a tad too Fast n Furious for my tastes, but from certain angles it seems to work well. And Toyota should be commended because not only is LED lighting – both front and back – completely standard on every trim, but it also offers LED rear turn signals that properly flash amber. In fact, I struggle to think of any vehicle in this segment that offers all LED lighting as standard. Thank you, Toyota!

Inside is a cozy place to be. If passenger space is your main priority, you may need to make some concessions on that front with the Corolla hatchback. Up front, room is decent, but the rear room can only be described as adequate. However, where the SE upgrade package really shines is in the interior because it adds heated seats and a heated leather wrapped steering wheel, wireless charging, a theft deterrent system and wireless charging. While I do recommend equipping this vehicle with this package, it is too bad that you need to spend $3,000 in order to get heated seats – something that should really be standard on most vehicles in Canada.

The interior design is nice and functional. The infotainment screen is hoisted atop the dash. I believe the thought process in placing it so high is so your eyes don’t need to stray too far from the road, but I mostly found it a bit of a nuisance because it meant for a longer reach for the controls. Luckily the system itself largely responds to commands in a quick manner and it is fairly easy to get used to.

Cloth seats are the name of the came at this price point (leather seating is standard on the XSE trim) but they are fairly supportive and comfortable. Quality of materials in general are good, even if some hard plastics can be found here and there. But those plastics are in areas you wouldn’t often find yourself touching anyway so that is forgivable.

There’s only one engine option available for the Corolla hatchback and given how the exterior looks you’d think it would be a turbocharged 4-cylinder pumping out well over 200 horsepower. Instead, it gets a very Corolla-like naturally aspirated 4-cylinder that makes 168 horsepower and 151 pound feet of torque. And actually those figures aren’t too bad. The only issue is since it’s non-turbocharged, power is quite linear. This is good if you are not wishing to jostle passengers about, but if you are looking to do some spirited driving, you’ll have to deal with a lack of low-end torque first. But, joy of joys, a six-speed manual is available and it helps to mitigate that concern. A CVT is available and is more efficient blah blah, but let’s talk about that manual because it really is quite good. And I don’t mean good from a strictly performance point of view, I mean it’s good in the fact that it’s actually difficult to stall the vehicle. I found myself able to take off from a standstill in 4th gear, for example. Sure gear throws are long but finding each gate is as easy as adding some seasoning to your BBQ chicken. It’s the perfect vehicle to teach new or willing drivers how to drive a manual, though I fear the manual transmission’s demise is imminent. Get them while you can, folks.

But if Toyota slapped a turbo into this vehicle, with a manual transmission, they’d really have something interesting here because its handling abilities are very good. There’s no other way of putting it. It has great dampers matched with good steering feel. That’s something I’ve not once ever said about a Corolla.

Of course, the Corolla hatchback is far from driving like a Volkswagen GTI, but it is now easily among the top three in the segment for being fun to drive. That’s also something I’ve never said about any Corolla. And just because it offers some level of engagement in the corners, doesn’t mean that it’s jarring for daily driving. I took it to a trip to my fiancee’s family farm which is a little over an hour long drive. Not once did I feel uncomfortable, in fact quite the opposite. The only downside to those 18-inch wheels and tires is that bumps and other imperfections can be felt, but again, the ride is largely smooth and comfortable.

Having this level of driving engagement matched with this
level of comfort is a tough feat to pull off.

Being a Corolla, you’d expect it to be quite frugal and you’d be right – that is, if you opt for the CVT. If you do your wallet will thank you for choosing it over any sort of driving fun because official numbers come in at 7.5 L/100 kms in the city and 5.8 highway. If you have a soul, and are therefore willing to sacrifice a bit at the pumps as a result, the six-speed manual is rated at 8.4 city and 6.3 highway. After a week’s worth of driving, my official combined city/highway mileage came in at 7.8 L/100 kms.

My friend with the former bland take on food and driving
currently drives a Kia Forte5. She likes it, but I have a feeling she’ll like
the new Corolla hatchback even more, especially now that she’s a bit more
adventurous. The new hatchback from Toyota looks fantastic and has good driving
dynamics all while retaining the characteristics which make it the Corolla
everyone seems to be so fond of.