Saturday Night Live was back with a new episode last week, and Couchtime’s guest blogger Allison is back with another review!

I actually watched a bit of this episode since I love Tina Fey (I read her book Bossypants a couple weeks ago and HIGHLY recommend it. I was laughing out loud and running into the other room to read passages out loud to my mom, it was so funny. Loved. It.) and I thought she did a good job. But I fell asleep after Weekend Update, and frankly my judgment past midnight is questionable, so let’s see what Allison thought of the show: 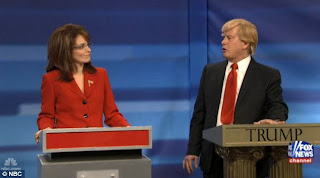 I love Tina Fey. She is a one-of-a-kind funny woman that there are just not enough of. And I may be an extra fan of hers because while visiting Ireland, the Irish lads seemed to like me because I reminded them of Liz Lemon. Thanks Tina! When former cast members come to host, the bar is always raised a little bit because they not only know what they are doing but they bring back loved characters. Oh, and let’s not forget Tina Fey is 6 months pregnant while hosting tonight’s show. Maybe she will be a pregnant Sarah Palin?
Opening: Bin Laden’s Will
Meh, as usual Fred Armisen plays the any Eastern looking characters. This time he is Bin Laden who is reading off his will. Sometimes these openings go on too long and this one did. The most surprising part of his will was his constant references to Dakota Fanning. And his request to never be buried at sea.

Monologue
Tina looks so cute with her belly. Oh, hello also pregnant Maya Rudolph, glad you could join. The two sing a funk-tastic song about their future babies that is sweet until the chorus reminds the baby their parents have been “doing it!”  What a great reminder in time for Mother’s Day.

GOP Candidate Debate
Sarah Palin already? I’ll take it. And also, Darrell Hammond shows up to do his Trump impression. I guess when Tina shows up it’s easy to tie in other past cast members. So 15 seconds into the sketch I was already bummed, Bobby Moynihan leaves the sketch. He is my favorite. Sketches like these remind me how boring our political candidates can be. I would like candidates to be characters like these, maybe our voter turn out will be better than last election. No, I wouldn’t vote for a candidate that is a character but it would put some spice in elections.
Little Mermaid – Under the Waves
HA HA! Take something from 1993 and add it to something that happened last week. As Sebastian the crab (Thompson) sings a song to Ariel (Fey) about how great it is to live under the sea, a certain body that was thrown into the ocean shows up. I liked how the sketch struck on the three reactions that the US is discussing, “USA!”, “I found this celebration really distasteful”, and of course, “Was he really responsible for 9/11?”
Digital Short
Here’s the premise, The Lonely Island Boys, hire Michael Bolton to sing the hook for their new song. Now I don’t want to go in too much detail about this because I highly recommend y’all to watch it for yourself. I give kudos to Bolton for doing this video even dressing in drag. I know he was supposed to be Julia Roberts, but he mysteriously looked like Sarah Jessica Parker. Any one else agree?
Weekend Update
These are hard to review but I will do my best. Seth Meyers had a lot of material this week to work with and it worked in his favor. I liked Gaddafi’s best friends segment. It is really hard to explain but if you watch it you may rethink how you speak about your friends. Yeah, Stefan is back! As usual there are two points of comedy to this character: Stefan’s descriptions of odd over the top New York club scene and the actor Bill Hader desperately trying not to laugh. And he broke quite a few times during it. The club I want to go to is SPICEY! Even my parents were laughing at this one.* I read an article recently that said Hader based the Stefan character on someone who serves him coffee everyday. I wonder if that guy has ever noticed that yet.
Birthing Video
Well the prude in me was out in full force watching this sketch. It was gross and I kept thinking, how are they getting away with this? Maya Rudolph was the star of this sketch while Tina Fey sat as the straight character. Come on Tina, get in there. Be funny.
Bedelia Sleepover
This character has been on the show a few times and sadly I don’t think it is working. And that’s all I can say, pass.
Pregnant in Heels
I will admit I love what Bravo programming has to offer. In Canada most of the Bravo shows are on a channel called Slice and so far this “Pregnant in Heels” show has not aired in Canada. This perfectly parodied how all Bravo shows are, they really do just edit a clip of a dog when nothing else is going on and there is always a random gay guy, played by Jay Pharaoh, helping somehow. But this gay guy admits after the baby was born, “I did not help with this at all.” I think Jay Pharaoh may not be returning to the show next year but we will see.
Next week is Ed Helms. Until then, thanks for reading.
*I usually watch SNL at my parents house the next morning when I come over for Sunday dinner. Please don’t think I stay up until 2am on a Saturday with them. That’s sad.

Jill again. I am so glad I fell asleep before that birthing sketch. That doesn’t sound like something I need to see. I totally agree with Allison on the earlier sketches though, especially the Little Mermaid one, the hilarious digital short and, of course, Weekend Update. Did anyone see Seth Meyers’ speech at the White House Correspondents Dinner? Very, very funny. I recommend watching that and Obama’s speech on YouTube, they both made some great jokes. Speaking of jokes about Donald Trump (because they mocked him a lot at the Correspondents Dinner…), Darrell Hammond better watch his back. Trump seems to have a pretty thin skin, so perhaps he’ll stop bashing Jerry Seinfeld and Robert De Niro and turn his attention onto SNL.