Thanks to a bizarre decision to skip a week of ANTM on the part of the Canadian channel that broadcasts it, I fell a little behind there for a while. But, thank god for the Internet! Once I realized what was going on, I got all caught up and am ready for the final two episodes of the season.

I was worried about my girl Hannah from the start this week. She hasn’t impressed the judges the way I hoped she might, and she seemed to be getting the elimination edit throughout the whole episode. You know, the one where the girls talks about how bad she wants this, how it’s time to step things up, that it’s do or die. Yeah, that was Hannah this week.

The episode kicked off with the girls once again having tea with Miss J, but this time Vogue Italia editor Franca Sozzani as well. Now that’s an important lady to impress! Alexandria was OK, Hannah felt like she didn’t stand out as much as she could have, and Molly was – gasp! – quiet and moody. Brittani was the real star of the afternoon, as she told Franca about her small town background and asked an intelligent question about the future of print magazines.

Afterwards, the girls all got a lesson in belly-dancing with a tea tray balanced on top of your head. These are important skills, guys! I know I personally spent most of the weekend practicing. Hannah and Brittani giggled as their trays repeatedly crashed to the ground. Molly whined about how the whole thing was incredibly “unfair” because she has a naturally pointy head and, in case you didn’t notice, the top of Alexandria’s head is all kinds of flat. After spending the afternoon practicing, the models all got to dress up in beautiful belly-dancing outfits and compete in the challenge.

The challenge was more difficult than what they’d been practicing, since there were lit candles on top of the tray, and a live audience right in front of them. Molly tripped and her tray fell, but her real problem was the permanent scowl on her face. Alexandria’s tray fell as well, but since she smiled the whole time her performance was much, much better. Hannah did a pretty good job, but Brittani was the clear cut winner.

In an incredibly sweet and selfless moment, at least for this show, Brittani chose Hannah to accompany her to a runway lesson with Miss J. Brittani said that, not to be mean, but she thought Hannah needed the lesson the most and wanted to go more than anyone else. Come on – that’s a really nice thing to do. Most girls would not be looking to help their competition improve at this stage in the game. Unfortunately, I’m not sure Hannah’s walk did improve – do Miss J’s coveted runway lessons really only consist of her making faces behind the models’ backs and yelling out “Wrong! Awful! Again!”? Because if so, I’d love to submit my application for runway coach next season.

Souk It Up, Baby

After the lesson, the girls wandered through an amazing-looking souk. If Hannah wasn’t already my favorite, this episode would have catapulted her into that position. I loved how excited she was about everything to do with Morocco, suggesting the girls visit a place that serves brain because it “looks authentic and interesting” and wondering when else they’d get to return to the souk and do more shopping. Hannah isn’t going to win America’s Next Top Model, but maybe she can score a travel show out of this or something.

Brittani spit her brains out, and then spent the rest of the episode whining about how sick she felt.

The girls returned to the souk for their photo shoot, where they were outfitted in gorgeous jewel-toned clothing and told to look as though they’d just arrived at their destinations. Whatever that means. Hannah clearly didn’t know what it meant, because even though she rocked her gorgeous purple dress, Jay told her there was a question mark on her face. In other non-surprises, Alexandria acted like a controlling know-it-all at the photo shoot and Molly did a great job despite her increasingly bitter and pouty attitude.

I was a little worried about Brittani, since she said she still felt sick that day and seemed pretty reserved on set. But she told Jay she was saving all her energy for the photo shoot, and she didn’t disappoint. In fact, I was impressed with Brittani. I thought it was kind of lame that she whined about the brains making her sick, and who knows – maybe she actually did feel sick. But she didn’t whine to Jay or let it hurt her work, and you have to respect that.

Designer Daniella Issa Helayel acted as the guest judge this week, and it seemed like everyone was critiqued pretty strongly. Perhaps Tyra and co. should sign on to be the judges on American Idol next season.

Brittani – Brittani looked like a really, really gorgeous amputee, because the way she leaned against a wall cut off her arm.

Hannah – Hannah looked amazing, but her face was kind of nothing. I still think she’s so pretty, though, and I loved the dress she wore to panel.

Molly – Molly looked great, but mean. Guys! When will the judges learn? She looks mean in every photo because she IS MEAN. 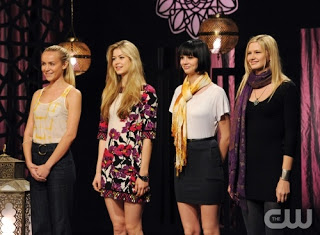 Based on how the critiquing was going, I knew Molly would be called first and Brittani second. But I really thought Hannah would be going home. I mean, I love her, but I always thought the judges were kind of lukewarm on her. And Alexandria has gotten so many chances, I thought for sure she’d be strung along to top three. But no! It’s Hannah who’s getting strung along, thanks to her previously stunning photos. Alexandria was sent packing, along with her controlling personality, her annoyingly overused bow hat, and her tensed up mouth.

I don’t know about you, but I think Brittani is the clear winner at this point. It’s not going to be Hannah, that’s for sure. I’d bet the farm that we’ll say goodbye to my favorite little Analeigh-lookalike next week. Molly has been strong throughout the whole competition, but I just don’t think she’s getting a winner’s edit. Brittani, on the other hand, had one outburst and spent the rest of the season apologizing for it. She’s the girl from the trailer park who hoarded away her Vogue magazines. What’s Molly? The sourpuss girl who says she has a bad attitude because she was adopted? I don’t think she’s gotten a winning edit. Furthermore, I think Brittani has produced better and more varied photos over the course of the season. Both girls are good, but Brittani has more range. I see a model when Brittani stands in front of the judges. I see an angsty teenager when Molly stands there.

Which of the three girls are you rooting for? Do you think there’s a clear winner yet, or will it depend on how the last few tasks go? 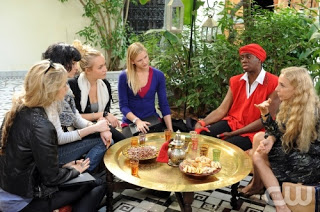