Ally: Two “It’s not me, it’s you” posts in one week? What have you done to deserve such a luscious gift? Nothing. People are just pissing us off all over the place these days.

For our loyal readers (Hi, Dad!), you are well aware of my affinity for all things shitty music. I really, really love crappy music. My friend Stephanie and I used to play a fun game when we drank too much in our early twenties. It was called, “The Song you have to Play at my Funeral”. This was not a Sad Times Bear type of game, we very much enjoyed it and took great pleasure in convincing each other that we would remember the others request. Since I was under the influence of a $9 bottle of wine at the time(s), I can’t remember which song I decided upon, but I’m pretty sure it was this:

I also requested for this to be played immediately afterwards to ensure levity amongst the masses wishing to bid me adieu:

It’s an inside joke. A joke that includes The Dome, Friends who don’t know when to stop giving you nickels/dimes/quarters, a Pay Phone, and a cordless phone thrown against the wall.  Obviously, it was one of the Best. Nights. Ever.

This all brings me to Miley Cyrus. I feel like Miley and I play a never-ending game of chess. Here for example?

[Editors note: I may need to update the Song you have to Play at my Funeral list.]

Surely, it will go down as one of the most classic pop songs of all time. Then Miley does this: 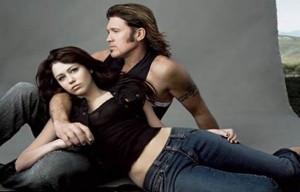 No joke; I still suffer nightmares from this image.

I was angry at Miley, really angry, but then she ran this game:

Crappy Pop Perfection. You will remove this song from my ancient iShuffle over my cold, dead body (Don’t forget to play the Spice Girls!)

Then Miley did this:

I don’t claim to be a fitness buff, outside of the Michael Jackson dance parties me and my two year old hold up in this joint, but I’m pretty sure jogging is not to be done in a bikini top, jean shorts and aviators. It’s not illegal, no. It just annoys me. It really, really annoys me.

Since Miley went for that infamous jog, and stopped making really bad music that I like to dance to alone in my home office, I’ve found it harder to find merit in her celebrity. Particularly her lack of awareness when it comes to the advances in technology and social media.

That was almost excusable. Young, wild and free…yada….yada…

No, seriously, I’m not done. 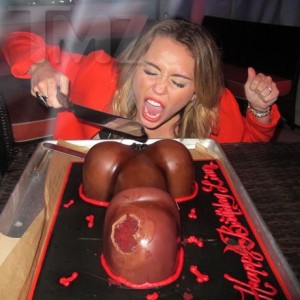 WHEN ARE YOU GOING TO REALIZE YOUR D-BAG FRIENDS ARE TAKING PHOTOS OF YOU?

Being a local celebrity myself, I’m always wary whenever L-A pulls out her cell phone. How do I know Harvey Levin isn’t waiting on photos of my “Britney” getting into a car?* HOW DO I KNOW?

*Helpful tips by the way in this video entitled, “How to get out of a car without showing your knickers”

It’s not just the stupidity or poor judgement with friends, it’s what she does to jean shorts.

I feel as though I’m a bit of a jean shorts connoisseur (indulge me). I may not pull them off myself per se, but I can recognize appropriate jean-short-wearing behaviour. Let’s review, shall we? 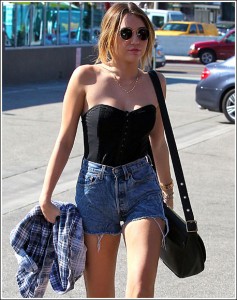 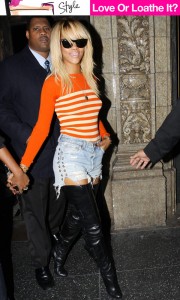 {Editors note: I wish I could be a box of wine on the wall at L-A’s apartment. She is likely frantically trying to remove my posting privledges…which for the record, she totally has the power to do. She taught me how to log in and update our Crappy Pop Videos of the week widget. That’s all I know #Sheiscuttingmeoutofthebookdealforsure]

If I could move away from Miley for a minute, for those of you still with me after the cake photo, can I just say that Rihanna is really enjoying a remarkable personal moment in fashion lately? 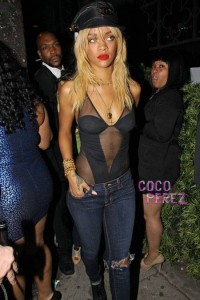 [L-Anote: Whaaat? In what universe is this lovely and/or chic? For reals?]

What? For real? You’re head tilting at me? Remember I wrote this post? That’s right, fall back.

So, that’s pretty much it. I wish Miley would just get back in the studio and have some producer T-Pain microphone her “singing” to incredibly inspirational lyrics that my two year old could write. Please, I ask you with respect.

P.S. Also, Miley? Maybe get peeps to check their cellys at the door at your next birthday party. You’re bringing, “She’s just being, Miley!” to a whole new level.

L-A: Yeaaah…I mostly agree with what she just said. Minus the true love for Miley’s pop tunes. Or anything she said about Rhianna. [Ally note: you spelt Rihanna wrong, bitch} because neither of those outfits were okay in my books.  Honestly, if it weren’t for these Fire Island gays having a time set to Miley, I probably couldn’t deal with her music at all.

She was never going to win me over. I’ve had little time for her since she posed in fuck me boots and said her line of clothing was going to be, like, good for Middle America. 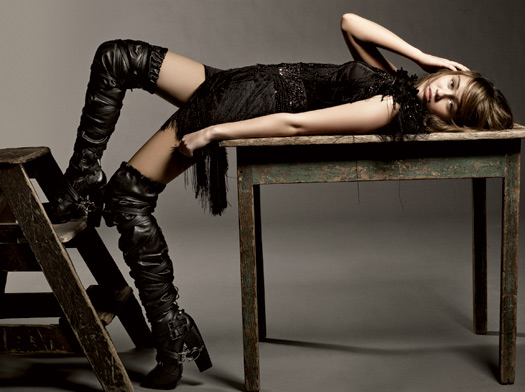 Oh, and Ally wasn’t kidding about hating her jogging outfit. She complained about it back in 2009. Bitch holds grudges. #whyIwontcutheroutofourpretendbookdeal

Ally: How funny is it that in the 2009 post I also included Rihanna? It’s TOTALLY FUNNY!!

Here’s the thing Miley Cyrus: It’s not me, it’s you.
https://haligonia.ca/heres-the-thing-miley-cyrus-its-not-me-its-you-54009/