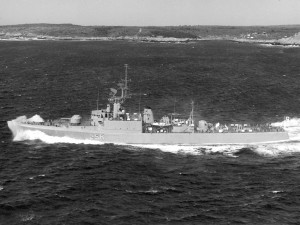 On Oct. 23, 1969, nine crewmen died and 53 were seriously injured after an explosion ripped through the Kootenay’s starboard gearbox. The crew’s quick response was credited with preventing further loss of life and saving the ship itself.

The 50th anniversary of the explosion aboard the ship will be commemorated today, at 10 a.m., at the Bonaventure Anchor Memorial at Point Pleasant Park, Halifax.

During the commemorative events, a wreath laying ceremony will take place as well as the naming of two brooks in the province after two Canadian Armed Forces personnel who lost their lives in peacetime at sea.

Roderick Reade Brook located outside Amherst has been named in honour of Roderick Reade, who died as a result of a fire in 1965, aboard HMCS Nipigon. The province will be naming a brook near New Glasgow in honour of Billy Boudreau who died due to the explosion on the Kootenay in 1969.

“We pay tribute to the crew of HMCS Kootenay – those who died and the great courage of the survivors after the terrible explosion on board 50 years ago,” said Premier Stephen McNeil. “May we never forget those who have lost their lives in service to Canada, protecting the freedoms we enjoy today.”

Quick Facts:
— at the time of the explosion, the ship was more than 300 kilometres off the southwest coast of England performing sea trials
— in 1972, six of the crewmen were awarded new bravery decorations accredited by Queen Elizabeth II
— the Bonaventure Anchor Memorial commemorates the personnel of the Canadian Armed Forces who lost their lives in peacetime at sea in the performance of their duties