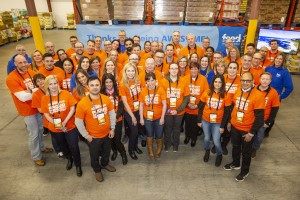 ​Atlantic Superstore and all Loblaw-affiliated grocery outlets across Nova Scotia are celebrating their most successful Holiday Food Drive to date, with a total of $189,027 and 45,913 pounds of non-perishable food items donated to local food banks across the province. This is the largest amount of money collected by the local stores for their twice-annual food drive.

The Holiday Food Drive ran from November 29 to December 24 at all Atlantic Superstore, Independent and NoFrills locations across the province. Donations of food and funds were collected for more than 35 local food banks in all areas of Nova Scotia where Loblaw stores are located, as well as for Feed Nova Scotia.

Nick Jennery, executive director of Feed Nova Scotia, says Atlantic Superstore’s Holiday Food Drive comes at a critical time of year. “We are always so appreciative of the effort and generosity on the part of both store colleagues and their customers, and especially so with this year’s record-breaking results. This effort will mean well-stocked shelves for food banks across the province all winter long, and that’s a huge thing for these organizations and for those individuals and families who rely on their support.”

“Atlantic Superstore has a long history of colleague-led initiatives supporting those in need here in Nova Scotia,” said Mark Boudreau, Director of Corporate Affairs, Loblaw Atlantic. “The food drive is a great example of this community support, and we want to thank our customers and colleagues for making the 2019 Holiday Food Drive so successful – they have really gone above and beyond this year.”

The 2019 Holiday Food Drive marks 10 years since Loblaw’s first national food drive was held in the spring of 2009. Since that time, stores across Canada have raised $24.8 million for local food banks, with almost $2 million of that total raised here in Nova Scotia to help community members in need.