I know, I’m very late in posting some thoughts on the HIMYM and BBT season finales. And here’s why: How I Met Your Mother was so boring that I wasn’t sure what to say about it, and The Big Bang Theory was so funny that I had to watch it twice. 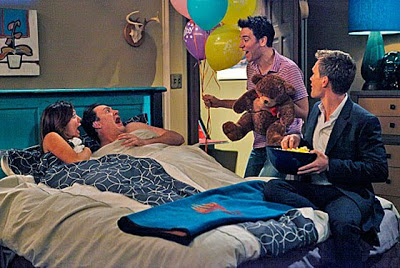 I was really hoping for more from How I Met Your Mother. Ted going blond? Really? Sorry, but that is not season finale worthy in the comedy department or the plot development department. And the show really could have used some comedy from Ted or Barney, because the other storylines in the show were pretty sappy.

I was pleased with the news that Lily and Marshall are going to try to start a family. I think it’s just what the show needs to stay fresh – after all, they spend all their time hanging out at a pub. Seeing how things change once Lily is knocked up could be a welcome change for the show’s sixth season. The whole “find the fifth doppelganger” thing played out well. It was funny, but not hilarious.

I was less impressed with Robin’s storyline. Things were going great between her and Don, until she got offered the lead anchor position at a news station in Chicago. She went to Ted for advice and he obviously tried to persuade her to take a chance on love, but Robin was dead set on choosing career. Again. Because Robin’s career is the Harlem Globetrotters and her love life is the Washington Generals. (A very good reference on Ted’s part, I must say.) What I didn’t like was that a big to-do was made about Robin’s departure, only to have her change her mind after about 30 seconds and stay in New York. Again. This is starting to feel old. Robin goes to Argentina, but she comes back. Robin takes a job in Japan, but she hates it and comes back. Robin breaks up with the group of friends to spend more time with Don, but she changes her mind and comes back. Robin decides to take a job in Chicago, but…well, you get the pattern, right?

The interesting twist was that as soon as Robin turned down the job, the news station offered it to Don and he took it. Robin was crushed, but the gang is still together. The worst part, for me, was Ted’s speech about how everyone is their own doppelganger and then him and Robin almost hooking up again. No! It’s been five years! She’s not the mother, so drop it!

There were a few good moments – Barney dressing up as a cab driver so he could score UN chicks (failed – girls don’t want to sleep with cab drivers) and then a street performer so that Lily and Marshall would have a baby was funny. The way the crew subtly got Ted to go blond by telling him there was no way he could pull it off. And…well, that’s kind of it. It was a shaky end to an up-and-down season, and I’m hoping for a more solid sixth season (introduce the mother, please!) because I still love this show. 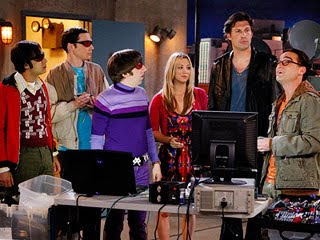 On the other hand, I loved everything about the season finale of The Big Bang Theory. It had me in constant fits of laughter. A lot was packed into the twenty-minute show, but it totally worked. The episode began with our four geeks, all single once again, shooting a laser off the roof of the apartment building in an attempt to bounce it off the moon. Leonard, who is still trying to figure out how to live across the hall from his ex-girlfriend, decided to go invite Penny to watch the experiment so he could prove their still friends. Penny came, but only at the request of her tall, meat-head date who said he wanted to see the experiment.

Everything on the rooftop was hilarious. Sheldon’s fear of a dirty old sock found on the roof. Everything that came out of Penny’s date’s mouth – he was worried they would blow up the moon! Sheldon’s sarcastic explanation that Albert Einstein had hoped his laser would “be bitchin'”. Sheldon’s first remark that “Now this is a man for Penny” and then his later admission that no, Penny could do better.

Penny came back from her date with a meat-head drunk and angry – Leonard had ruined her ability to tolerate idiots. She dragged him into his bedroom for sex. I loved that the season finale didn’t have Penny and Leonard getting back together. Instead, we got to see Leonard get even more confused about how to act after a break-up. The poor guy thought the drunken sex meant they were back together, which it didn’t. Then he was even more confused when he tried the same tactic that Penny had used on him – on both ex-flame Leslie and on Penny herself – and failed miserably. I loved the storyline because even though Leonard is the most socially adept of the geeky foursome, it’s nice to see him in awkward situations on a different level than the other guys. Wollowitz would never last long enough in a relationship to have Leonard’s problem, so it’s both believable and hilarious to see Leonard try and figure out this new territory. It also proves that there is plenty of material for a post Leonard and Penny show.

The funniest storyline, though, was Wollowitz and Raj’s attempt to fix Sheldon up on a date. They used a new dating site that was supposed to scientifically find mates for people. Raj compared it to finding Frankenstein’s monster a bride – only not built from dead body parts, Wollowitz pointed out.

Raj and Wollowitz completed Sheldon’s profile and answered all the questions as they knew Sheldon would. But when the site found a match, they had a hard time convincing Sheldon to go for it. He scoffed at them and threw his hands up in the air, actually, “exhausted by their constant tomfoolery.” Finally, Raj threatened him with the dirty sock from earlier in the episode – he told Sheldon he’d hidden it somewhere in the apartment and it would remain there until Sheldon went on the date. Sheldon thought he was bluffing, but it was too high a risk.

Sheldon met his date, Amy Farrah Fowler, at a local coffee shop. Even getting Sheldon there was difficult since he doesn’t drink coffee and only drinks hot chocolate during months with an R in them, because “What’s life without whimsy?” I actually choked on my own hot chocolate when he said that.

Amy Farrah Fowler turned out to be exactly like Sheldon. Exactly. She dates once a year as per an agreement with her mother. Sheldon has the same agreement with his mother regarding church. She is baffled by the concept of a deity that takes attendance. They both share a dislike for “soiled hosiery”. And much to Sheldon’s delight, Amy stated that “all physical contact, up to and including coitus, are off the table.” I loved how the writers had had Sheldon say Penny’s date “must be very skilled at coitus” at the beginning of the episode to remind us of his frequent use of that word.

Sheldon seemed enamored and offered to buy her a beverage. And I should add, Sheldon’s female counterpart was played perfectly by Mayim Bialik. She played Blossom back in the day and holds a PhD in neuroscience in real life. If we don’t see her back next season, even for a few episodes, I’m going to be sorely disappointed. I want to see where this goes, because I’m pretty sure it’s going to be hilarious.

How I Met Your Mother and The Big Bang Theory: Better late than never!
https://haligonia.ca/how-i-met-your-mother-and-the-big-bang-theory-better-late-than-never-18176/