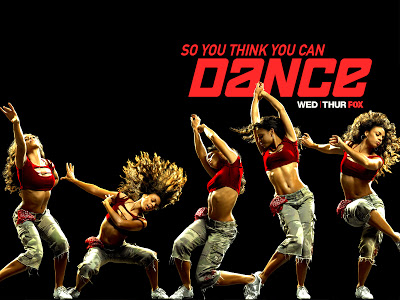 Summer is here, and most of the shows I write about have ended. I’ve got a fun project up my sleeve that I’ll be posting about later, but I’m also on the lookout for some shows to watch this summer. I’ve never regularly watched So You Think You Can Dance, but I thought I’d try last night.

I’ve got to be honest, I kinda failed.

There are certain shows I multitask during. I usually write my blog posts for The Celebrity Apprentice while the show is on – what else am I supposed to do during commercial breaks? In fact, I’ll often check out Twitter or Facebook while I watch shows that don’t completely capture my attention. But my computer is in the shop, so last night I read a magazine during SYTYCD. And I ended up being more involved in checking out what the hottest makeup trends are for the summer than I was in the show.

A couple people caught my eye. There was a guy who was good enough to impress at a bar, but not good enough to be on the show, who said he cleans up crime scenes for a living. I liked him because he reminded me of the movie Sunshine Cleaning and I find both Emily Blunt and Amy Adams so immensely charming that they convinced me that cleaning up crime scenes is a totally honorable job. But the judges were so rude! Did they really have to show their disgust at his profession so much? It’s a dancing competition, not a “Who Has The Best Job” contest!

There was also a guy who came out in a fruit hat and a broccoli bra, who of course made the requisite “fruit” joke. He was funny because Nigel looked so incredibly uncomfortable during the whole thing. But neither guy, obviously, made it through.

There were also two performers that caught my attention for being awesome: A cool little guy in stripes and a top hat and a bigger girl who did that interpretive dance stuff that I hate so much. The judges were right when they said the female performer, Megan, blew a lot of stereotypes out of the water with her performance. But then both dancers later bombed their choreographed routines and were eliminated.

So here’s my question, guys: should I pick this show back up when the auditions round is over? I’ve always hated the auditions shows on American Idol and rarely bother to watch. Should I tune back in when the real competition begins?