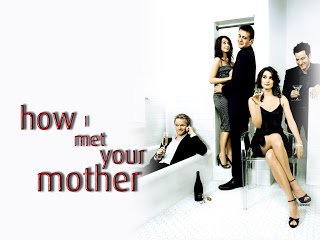 While I don’t love the fact that when this season started we were kind of teased with meeting the mother in the finale, I did think Monday night’s How I Met Your Mother season finale was pretty darn good. Read on at your own risk!

So the wedding we witnessed? It’s Barney’s. I find it a little hard to believe that Barney would tie the knot before Ted, but there you go. And the way this episode left off, he could be marrying either Robin or Nora. Throughout the whole episode, Barney and Robin exchanged wistful glances, spoke warmly of their old relationship, yet adamantly agreed that it wasn’t good to dredge up the past. Yet for the latter half of this season (starting with the episode where Barney mentioned how he’d never been happier than he was with Robin) it’s felt like we’ve been building up to a reunion. 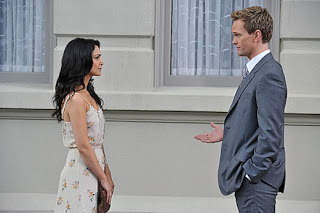 But when Barney ran into Nora on the street, he asked her if she’d like to get coffee sometime, which we’ve all learned is code for “Let’s get back together”. Robin looked on, sadly. I know many of y’all were big fans of the Robin and Barney relationship, but I still don’t know if I see them together. However, I don’t think we know enough about Nora to see her as Barney’s soul mate either. If there has been one episode where I became convinced that Robin and Barney could end up together, it was “The Perfect Cocktail”, which showed us that Robin knew Barney almost as well as Lily knew Marshall. Throw me a few more of those, and I might be able to board the Robin and Barney train. 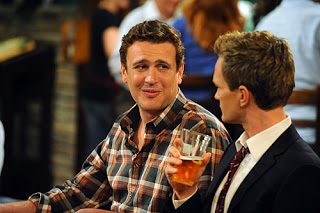 Speaking of Lily and Marshall, I really liked what happened with them in this episode. At first, I really did buy that both Lily and Marshall had food poisoning. (On a side note, I saw Bridesmaids right before watching HIMYM on Monday night and while the movie was HILARIOUS, a girl can only deal with so much food poisoning humor in one night, y’know?) The worst part of it all was that Marshall had a big job interview, and spent the whole thing anticipating his impending illness. He ended up blowing the interview, only to come home and not get sick. Because Lily didn’t get food poisoning from the soup, she had morning sickness.

I thought the way everything was handled with Lily and Marshall was great. Marshall had a bit of a breakdown over what a terrible year he’d had – his father died, and he just blew an interview at a job he really wanted. But I think because of that, he was able to really celebrate Lily being pregnant. They’d taken having a baby off the table, but I think it was the right time to move on. I hope Marshall gets the job he interviewed for, or some job that he’ll like, because I’m ready to see Lily and Marshall be happy in the seventh season. 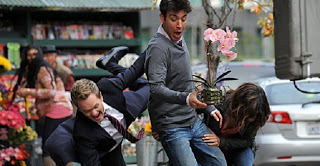 Ted’s storyline in the finale was as weak as his storyline all season – he was contemplating getting back together with Zoey. While I did see humor in the joke that Ted always goes back to old flames as soon as he hits a little bump in the road, I was just ready for him to move on from the whole Zoey thing. I didn’t need to see her again. Ted’s storyline, and Zoey’s character, was the weak link that stopped this season of HIMYM from being great. Whatever happens to him in season seven, whether he is in a relationship or not, I hope they give Ted some better material to work with.

What did you think of the finale? Who do you think Barney is marrying? (I’m pretty sure everyone is going to answer Robin, but I’m asking anyway.) Do you think a baby will ruin the show, or were you ready for Lily and Marshall to take that step?

Here are some other things I loved from the episode:

How I Met Your Mother: Barney and a Bride
https://haligonia.ca/how-i-met-your-mother-barney-and-a-bride-37960/