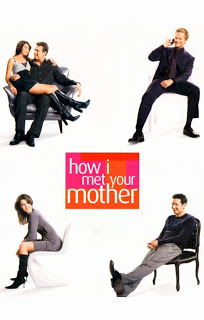 So we didn’t meet the mother. But I knew we wouldn’t. The hype around this upcoming season of How I Met Your Mother

has been pretty optimistic. The season has been described as the beginning of a “third act” and we’ve been promised that the show would get back to its roots.
Well, it was a start anyway. We did see a wedding – two, actually. We saw Ted preparing for a toast as best man at a wedding where he meets The Mother (who else wondered who the hell’s wedding that could be? Robyn’s?) and we saw Ted fake-marry Cindy’s friend in a bar. But it was just to prove Barney’s point, that if he had dips and Ted went after a girl their entire relationship would be tainted. Anyway, I’m getting ahead of myself.
We began a few months after we left off. Lily and Marshall were trying for a baby, Barney was still relishing in the glory that is sundresses on hot girls, Robyn was wallowing in misery over her failed relationship with Don, and Ted was trying to muster up the courage to talk to a cute girl.
Let’s talk about what worked: Marshall and Lily. I loved the stuff about Marshall being too weirdly close with his dad. I totally understood what weirded Lily out about Marshall’s dad knowing they were going to try and get pregnant before it even happened, and the moment where she revealed to Marshall that she was scared she’d let him down was really touching. It also allowed for a nice set-up with Barney – he briefly revealed that if he knew his dad’s phone number, he’d call him all the time. He quickly got distracted by a hot girl in the bar, but it set up his story arc for the season – finding his real father. Not Bob Barker.
What didn’t work, for me anyway, was Robyn looking like a bum because Don broke her heart. Can’t a woman be heartbroken without being pathetic as well? Did she have to look that bad? One of the good things about HIMYM

is that it’s told in recollection, so you can always assume some things are being exaggerated. But come on, guys. Did you really have to make her ugly? Couldn’t she just drown her sorrows in alcohol or casual flings? Why did she have to get all gross and start eating Cheetos out of her hair? Not cool. 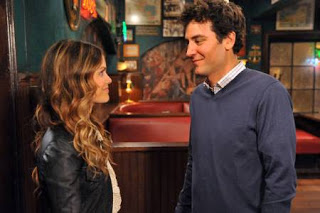 Most of the episode took place in McLaren’s Pub, where Ted was eying a cute girl until his ex, Cindy showed up to meet her. I didn’t remember Ted’s break-up with Cindy being particularly brutal, but he was terrified of her. It turned out that things were cool, and for a minute it looked like she was going to set him up with her hot friend, but it turned out that the two were together. Apparently Cindy’s a lesbian now. It seemed a little gimmicky, but I didn’t think Cindy’s friend was The Mother anyway. It’s too soon.
The wedding we saw in the flashback is the day Ted meets The Mother, so we’re all obviously wondering who’s wedding that is and when it will be. There have been a lot of teases like this in the past, but this time I believe that this moment is actually coming. Overall, I thought the episode was just OK. But I still have high hopes for the season. What did you think?

How I Met Your Mother: Can you dib it, baby?
https://haligonia.ca/how-i-met-your-mother-can-you-dib-it-baby-25855/