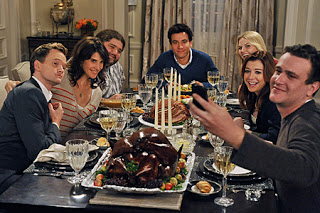 Worst HIMYM Thanksgiving episode ever?
Maybe it’s just me, but last night’s “Blitzgiving” had all the charm of a dry turturkeykey. How I Met Your Mother has usually rocked the Thanksgiving episode in the past. Remember Slapsgiving? I do. I miss it.
Jorge Garcia’s guest appearance really left me thinking “Aw…man…” It wasn’t his fault, really. Both the writing and the delivery felt forced. I mean, Lost jokes? Really? Plus, there’s no way I’m buying that there has been a sixth friend all along who constantly calls it a night early and misses cool stuff. Maybe if he lived in Chicago or something, but I cannot accept the idea of a new friend who sometimes hangs out at McLaren’s. There’s Ted, Marshall, Lily, Robin and Barney. And now apparently Zoey. Anyone else who gets a storyline has to be visiting from out of town.
The stuff about enemies becoming friends (Ted and Zoey) was OK, and the recurring joke of “The Gentleman” was pretty funny. It was really just the whole Blitz thing that I hated. The way they breathed it to one another? I didn’t even crack a smile.
In fact, there’s only one joke from the whole episode that I even feel like repeating. Thanks, Barney, for livening things up a little.
“Robin! Robin! I will pay you to be the Blitz. A hundred dollars, no! Ten thousand dollars, no! Sixty bucks. What’s a lot of money to someone like you?”
What do you think? Am I being too hard on the episode or does HIMYM really need to step it up?

How I Met Your Mother: Changing the course of Blitztory
https://haligonia.ca/how-i-met-your-mother-changing-the-course-of-blitztory-29504/