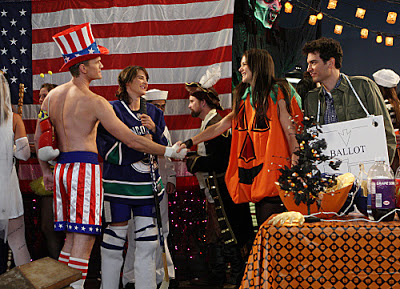 I mean, I knew the slutty pumpkin would probably be a flashy guest star – with appearances from people like Britney Spears and Katy Perry over the years, it’s something that HIMYM has done often and has usually done well. But try as she might, I just don’t think Katie Holmes was funny enough to pull this off. Her appearance felt like a desperate attempt to show that she’s really funny and thus make viewers want to see her new movie with Adam Sandler. The thing is, she wasn’t that funny and even if she’d been Kristen Wiig she wouldn’t be able to convince me to see Jack and Jill.

What saved the episode for me was the Barney and Robin subplot. As a Canadian myself I was destined to love it. After years of taking crap from Barney for being Canadian, Robin discovered that Barney’s dad’s mother was Canadian – making our beloved Barney Stinson one quarter Canuck. Yay! Canada has always been depicted as a huge stereotype on this show, but luckily we Canadians have great senses of humor about ourselves. I loved every reference and quip that came out of this revelation. This type of back-and-forth is when Barney and Robin are at their best, and without that pesky Nora around to kill the chemistry I was free to enjoy it. I hope we still hear Robin tease Barney about their shared heritage from time to time, because that stuff is comedic gold.

When Lily’s grandparents gave her and Marshall their suburban home, Lily jumped at the opportunity to move out to the ‘burbs. Why the sudden change of heart from this born and bred city gal? Pregnancy brain, apparently. Now, this could have worked – everyone knows that pregnancy can make a lady a little loopy, and hormones make emotions run high. I could have bought that Lily would temporarily think that moving to the suburbs was a good idea. But did they have to make her such an idiot? No one gets that stupid when they’re pregnant. Women still hold jobs and take care of other children and function as normal human beings, all while pregnant.