If you haven’t seen it, the second episode of Sweet Home Alabama is available for viewing on CMT.com now. I just watched it and I’m feeling pretty good about the snap judgments I made based on the first episode. So let’s talk about what happened.

Tribble took all twenty girls on a date to an alligator…zoo? Farm? Ranch? Whatevs, there were alligators, OK? This was a great way to make sure Tribble could tell which girls were from the country and which girls were from the city. The country girls wore appropriate footwear like boots. The city girls squealed things like “What’s this gooey brown substance all over the ground? Mud? Omigod I’ve never touched mud before!” Seriously, where did they find these girls? I am a city girl through and through, but I don’t freak out when it’s time to get a little dirty. I hope at least one of those city girls isn’t as obnoxiously prissy as they come across as a group. The best part of the group date was when Tribble asked the ladies if any of them had spray tans that would run in the wet weather. We’re all looking at you, Kristina with a K. 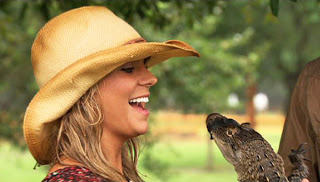 During the date, Tribble stole so moments alone with country girl Tristan. They played with some baby alligators (were those babies? they were smaller) and then kissed in the rain. Very romantic, if you ask Tristan.

Next was another group date – a “family” meal with Tribble and the women. Considering the drama that’s surrounded Erin and her vegan diet, I knew this was bound to be exciting. As soon as Mandy heard they were going to all cook, she grabbed Paige and made plans to go kill their dinner…in Florida? Why did they have to go to Florida to hunt deer? Anyway, their plans caused a lot of drama in the house.

Erin was probably acting rather passive-aggressive in the way she stuck around so she could overhear the hunting conversation, but she didn’t seem to be the one who really started the confrontation. Sure, maybe a few of the country girls really were curious about her lifestyle and the reasons behind her decisions, but the way they asked her about it all at once made it very confrontational. It’s rarely a good idea to ask a vegetarian or a vegan to defend their choices. I don’t think I’ve ever seen it end well.

All the women met Tribble at a local culinary school to cook dinner, and Mandy and Paige met them there with the killed deer. Look, I’m a meat eater, but even I might have felt a little queasy seeing the antlers in the kitchen. That’s kind of gross. I still would have at least tried the venison dish, though. 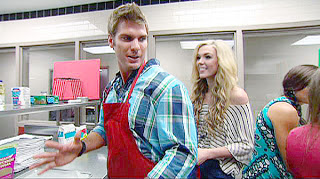 In other display of how city girls are prissy and useless (really ladies, you’re not representing us very well), very few of them knew how to cook. Jacqueline actually said she’d never been in a kitchen. What? Where the hell did you grow up, a hotel? Are you Eloise? Everyone has been in a kitchen. I don’t love to cook and used to joke about storing shoes in my oven, but you know, I’m 25 years old and not made of money. I have a few recipes up my sleeve and could have pulled something together. Kristina with a K just ended up ordering in sushi.

I loved the look on Tribble’s face as he pretended to like the taste of the batter for Erin’s vegan cupcakes. Of course she got creamed in the bake-off when she went up against Ashley Ann and her red velvet cake.

Tribble asked Jacqueline, the New York girl who “works for” the Yankees , to go one a one-on-one date with him this week. They just hung out at a pretty outdoor gazebo and enjoyed some wine and the stars. I don’t exactly dislike Jacqueline, but I think she has about as much personality as a saltine cracker. They kissed, and when Jackie went back to the house she ignored the other girls as they peppered her with questions. That’s probably for the best – the poor girl thinks she was the first one to kiss Tribble, and Tristan could tell her that’s not true.

One of the girls who really stands out to be as being sweet and genuine is Cassie – the country girl, not the spandex-clad pop star. When the girls were busy bickering over hunting vs. veganism she was just trying to stay out of the drama, and she seems to find the whole experience of vying for Tribble’s attention a little overwhelming. I couldn’t believe that Cassie would feel like she wasn’t standing out in the crowd when she’s the most gorgeous girl there, but even Tribble noticed that she was fading into the background. At the end of the episode he had to send four girls packing, and Cassie was the first girl Boyd came calling for. Cassie told Tribble she really wants to be there, and he kept her around. She seems like a nice, smart, down-to-earth girl and I really think Tribble should go on an actual date with her so he can get to know her.

Boyd called Cassie, Colleen and Chiara, three city girls, in to see Tribble and he sent them all home together. I wasn’t surprised to see so many city girls go home, but I was surprised to see Kristina with a K stick around for another week. She’s so fake! Next Tribble sent Texas girl Jessica home. I couldn’t remember anything about her, so she couldn’t have stood out too much.

Now there are sixteen women left, and Tribble will send four more home next week. Who do you think he should send home next? (I think we’ll be saying goodbye to Mandy, Kristina and Erin sooner rather than later.) Who do you think will stick around for a while?