Parenthood is consistently one of my favorite network shows, and after suffering through yet another disappointing episode of Glee last night and two so-so sitcoms in New Girl and Raising Hope, “Forced Family Fun” was a refreshing hour of good television. I’ve been re-watching Friday Night Lights recently and can see a lot of similarities between the two Katims shows, but in good ways. Likeable characters do unlikable things, and characters that I don’t like aren’t necessarily villainous – they’re just realistic characters who I likely wouldn’t particularly care for if I knew them in real life. Kristina’s whole family acted like brats this week, but that doesn’t mean I hate him. Seth has been a crappy dad and person his entire life, but that doesn’t mean he’s undeserving of support as he tries to turn his life around. Week in and week out, Parenthood is a fascinating portrait of a family.

Kristina Braverman has never been my favorite character, but ever since the birth of Nora I have really felt for her. It seems as though she has almost no one on her side, and it’s not necessarily anyone’s fault. Adam has started a new business, he needs to make it work in order to support his family, and that means he’s distracted from what’s going on at home. Haddie is in her final year of high school and has always been a bit of a go-getter. She’s busy studying and attending student council meetings, she has college applications to work on. While I wish she’d be a little more helpful around the house, you also can’t expect a seventeen year-old kid to just drop everything and start playing nanny. And Max has his own set of special needs which, frankly, I’m not really sure how they’re even being met right now. That said, Max was very funny in this episode – I loved his reaction to Kristina’s excitement about Nora’s five and a half week birthday, telling her “That’s not a significant passage of time.” (Apparently it’s the day you can allow your baby to mingle with the unwashed masses, so yeah, to Kristina it’s significant.)

Kristina sees her family splitting apart and just wants to make the most of the time they have left before Haddie goes off to college. She just wants someone to watch Mousetrap with her and Nora. (Do you have to watch kids’ movies with babies? I used to babysit my younger siblings a lot, and I would totally watch whatever I wanted with them when they were about six months old. They’re babies, they can’t understand it.) The problem is that everyone in her family has a different set of needs, so it was hard to come up with an activity that would make everyone happy. When Adam finally came up with the suggestion of mini-golf (who takes a baby mini-golfing?) the outing was a disaster. There was bickering and whining and in the end, Kristina just made everyone get out of the van and went mini-golfing alone. Even though Kristina acknowledged later that it wasn’t her finest hour, I thought it was a completely justified reaction. By the time she’d returned home everyone in her family had realized what jerks they’d been. And it led to a very sweet moment where Kristina confessed that she was feeling rather sad about the prospect of Haddie leaving home. All in all, I thought the episode was a major win for Kristina.

Seth going to rehab is a very good thing. He’s the father of Sarah’s children, and it is in their best interest for him to sober up and be a more reliable presence in their lives. It might be too late for him to make amends with Amber, but I don’t think it’s too late for him to cultivate a relationship with Drew. It’s difficult to make it through rehab without having someone rooting for you, without having something to work for. Sarah is doing her best to be that person for Seth, because she truly believes that he can change and get better. What Sarah is doing is commendable. Unfortunately, it’s also very dangerous.

First of all, Sarah’s relationship with Seth and the support she’s been offering is clearly damaging her relationship with Mark, and that’s a relationship that’s good for her. Mark is such a nice guy and has already been far more accommodating than most people would be. It was nice to see him stand up for himself this week and make it clear that it’s not OK for Sarah to bail on him just because she thinks Seth needs her. And it was nice to see Sarah actually follow through on that. I still have a feeling that this won’t end well for Sarah and Mark though, because she’s simply too distracted to devote enough attention to that relationship.

It’s also a dangerous situation because it seems as though Seth thinks if he can sober up he can have a relationship with Sarah again, and that isn’t her plan. She wants him to get better because it’s good for him and it’s good for her kids, not because she’s willing to give him a second chance. But should she tell him that? Would it crush his hopes of being a family again and ruin his chances of making it through rehab? She needs to be honest with him, but I’m worried that Seth won’t be able to handle the truth. Especially since Amber and Drew are nowhere near ready to have their own relationships with Seth. It’s clear that Seth is filled with regret about his past mistakes and wishes he could go back and correct them. Amber and Drew have no reason to give him another chance, to visit him in rehab, or to indicate that they want to try and have relationships with him. And so I think Sarah’s trying to fill that role for him. Like I said, it’s very much a grey area and I think that makes for a very compelling storyline.

I’m a little worried that Zeek will take his concerns about Sarah and Seth too far. I didn’t like the fact that he went to Adam about it, although that could be in part due to the fact that I found whatever song they were playing during that conversation incredibly distracting. Still, I felt like Zeek’s disapproval of Sarah’s situation has almost become like beating a dead horse.

I know the Julia Buys A Baby storyline isn’t everyone’s favorite, but I’m willing to overlook some of the ickier aspects of this story arc so I can appreciate what I do like – and that’s Julia’s growing relationship with Zoe.

When Julia saw Zoe eating sushi (a major no-no for pregnant ladies), she freaked out over whether or how to tell Zoe she shouldn’t be doing it. Naturally, Julia sort of mishandled the situation by coming off a little preachy even though she was trying to sound casual. Zoe was offended and, I think, a little embarrassed. But Julia’s intentions weren’t entirely selfish – as she told Zoe, she would have brought that up whether she was planning on adopting the baby or not. Because that’s who Julia is. As Julia starts to realize more and more just how on her own Zoe is, she’s taking more steps to become involved in her life. She made her a nice lunch and invited her over for dinner. Zoe is a little put off by all of this because she isn’t used to it. Nobody’s ever taken care of her like that before. Zoe appears to be quite pregnant, so I’m interested to see what this relationship will be like once (if) the adoption goes through. Like I said in my last review, I’d love to see the show explore an open adoption situation where Zoe is a part of the baby’s life. 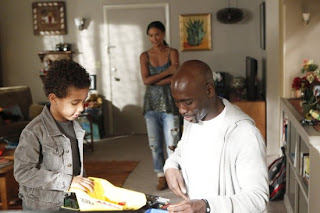 I thought the Crosby/Jasmine storyline was really strong this week, and a great example of why I was much more interested in seeing a co-parenting storyline with these two than seeing them together as a couple. Crosby and Jasmine had agreed not to let any significant others interact with Jabbar yet, and when Jasmine broke that agreement Crosby freaked out.

Crosby has often been painted as the screw-up on this show, and often it’s for good reason. He did, after all, cheat on Jasmine. While they were engaged. And Jasmine has often come across as kind of a bitch, someone who overreacts to minor errors made by Crosby. So it was nice to see them in a situation where I could see where they were each coming from.

Ultimately, I do think Jasmine was in the wrong, and it was nice to see her acknowledge that. Yes, Crosby had dropped Jabbar off early which led to him witnessing Dr. Joe in his home, but it was Jasmine who allowed Joe to stay a while and play with Jabbar. And that hurt Crosby. Jasmine hadn’t anticipated how it would hurt Crosby to hear about how much fun it was to play with Dr. Joe, and she would have felt the same way if the situation were reversed. In fact, it’s worse for Crosby since he has a more legitimate fear of being replaced. He wasn’t a part of Jabbar’s life for the first five years, and that was Jasmine’s decision. If Jasmine were to get married, I can see why Crosby would fear that this new guy would overtake the father figure role in Jabbar’s life.

That said, not introducing Jabbar to significant others isn’t a sustainable plan, and Jasmine’s ready to take that step. She came to talk to Crosby about it, and I think this will be a pretty uncomfortable situation for a while. Crosby’s clearly not over losing Jasmine. It’s tough enough for him to know she’s with another guy, and to hear his adorable son rave about that guy will only make it tougher.

What did you guys think of “Forced Family Fun”? It seems that this episode, more than some others, highlighted the fact that all of these characters are flawed. I love this, but I’m curious to hear if that’s what draws others into the series as well. If you’re watching Parenthood, what is it that you like about the show?