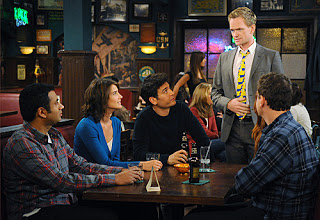 The episode was a flashback-within-a-flashback, which HIMYM always manages to do well. (Since, you know, the entire series is one big flashback.) The whole gang (minus Nora – is she ever around?) was hanging out in McLaren’s and referred back to Hurricane Irene to explain the origin of a “No Boogie Boarding” sign in the pub to Kevin. As Ted tried to tell the story, he kept getting interrupted by Barney who was trying to convince Marshall to let him out of the Ducky Tie deal.

So, the hurricane. Ted was the only one of the bunch who took the warnings seriously and wanted to escape Manhattan and head up to that house he bought that time that we never see and hardly ever hear about. He was well equipped with everything from an emergency disaster-relief backpack to a pair of pink mens’ rainboots. (Easier to see from the rescue chopper.) But no one else wanted to go. They were content to wait out the storm in Barney’s apartment, drinking beer.

A lot of bickering ensued, and my favorite part of the whole thing was Marshall’s dark Poe-like attitude, since he was in the midst of going two weeks between health insurance plans. The guy saw death everywhere (usually in the form of a dude in a bear costume) and made Lily stick to him like glue for protection. When Marshall finally realized how much he’d been smothering Lily they made up and made a baby in Barney’s bathroom. Nice!

When the storm was over the next day everyone headed back to the pub, which was still closed. Marshall decided to abandon his fear of getting hurt while insurance-less and to seize the moment by going boogie boarding in the street. He went straight through the window of McLaren’s, hence the sign. But there was more…also that day, Barney and Robin almost kissed. They got interrupted and didn’t go for it, but the things Barney said about Robin’s distant dad were enough to make his feelings clear. Soon after that day, Barney met Nora.

Back in the (sort of) present day, Barney was trying desperately to get Marshall to relieve him of having to wear the ducky tie. He tried to bribe Marshall with an extra slap – and tempting offer, considering Marshall only had one slap left from their previous slap bet. Barney spent the evening trying to tempt Marshall to slap him, so that he’d have used his one remaining slap and would want to score one more. But Kevin was onto him – he deciphered Barney’s actions (Therapisted! Shrinked! Shrunk?) and figured out that the reason Barney was so desperate to rid himself of the embarrassing tie was because he had an upcoming meeting with Nora’s parents.

Eventually, Marshall struck a deal with Barney – he could take off the tie in exchange for three slaps, which would bring Marshall’s total up to four. Barney took the deal, took off the tie, and took two massive slaps to the face right then and there. So two remain.

Barney and Robin shared a cab home from the bar, and continued to reminisce about the hurricane, specifically, their almost-kiss which they hadn’t shared with the rest of the gang. As they were joking about what it would have been like to make out, they suddenly locked lips. Uh-oh!

I always knew Robin and Kevin were doomed (and it’s kind of too bad, since I like the dude) but what will this mean for Barney and Nora? He’s about to meet her parents! Will he try and write off his kiss with Robin as a mistake? How long before that relationship goes South? I don’t think Barney and Robin will end their respective relationships immediately, but at this point I can’t see how Nora could possibly be the one Barney ends up with. Not only is there the kiss, but the writers haven’t even tried to make us viewers care about her. We’ve seen Kevin interact with the group more than we have Nora, and I think we all knew Kal Penn wasn’t going to be a permanent addition to the series.

So what did you guys think of the episode? Did you dig it as much as I did? And of course, check out a few of my favorite quotes and moments:

How I Met Your Mother: Slap Stick
https://haligonia.ca/how-i-met-your-mother-slap-stick-48214/